US indicts alleged Russian agent for conspiring to influence US politics

Maria Butina was charged with conspiring to act as an agent of Russia “by developing relationships with US persons and infiltrating organizations having influence in American politics.”

A picture that Maria Butina posted on her Facebook page. She stands accused of being an agent for the Russian government. (Maria Butina, Facebook)

A 29-year-old Russian woman has been arrested for conspiring to influence US politics by cultivating ties with political groups including the National Rifle Association, the powerful gun rights lobby.

She was arrested on Sunday and is scheduled to appear on Wednesday in federal court in Washington, the Justice Department said.

Butina was charged with conspiring to act as an agent of Russia “by developing relationships with US persons and infiltrating organizations having influence in American politics,” it said in a statement.

Her arrest was announced as President Donald Trump flew back from Helsinki to Washington, following a summit with Russia’s President Vladimir Putin where he was accused of failing to stand up to Putin over Moscow’s hack of the 2016 US presidential election.

The Justice Department said Butina had broken US law by not disclosing to US authorities that she was acting on behalf of the Russian government.

Butina had close ties to a “Russian official” who was not identified in the charging documents but who has been widely reported to be a Russian politician named Alexander Torshin, it said.

An ally of Russian leader Putin, Torshin is currently a senior official with Russia’s central bank and a former top Russian lawmaker.

He is one of a number of senior Russian officials subject to US sanctions.

The Justice Department said Butina carried out her activities in the United States at the direction of the “Russian official.” 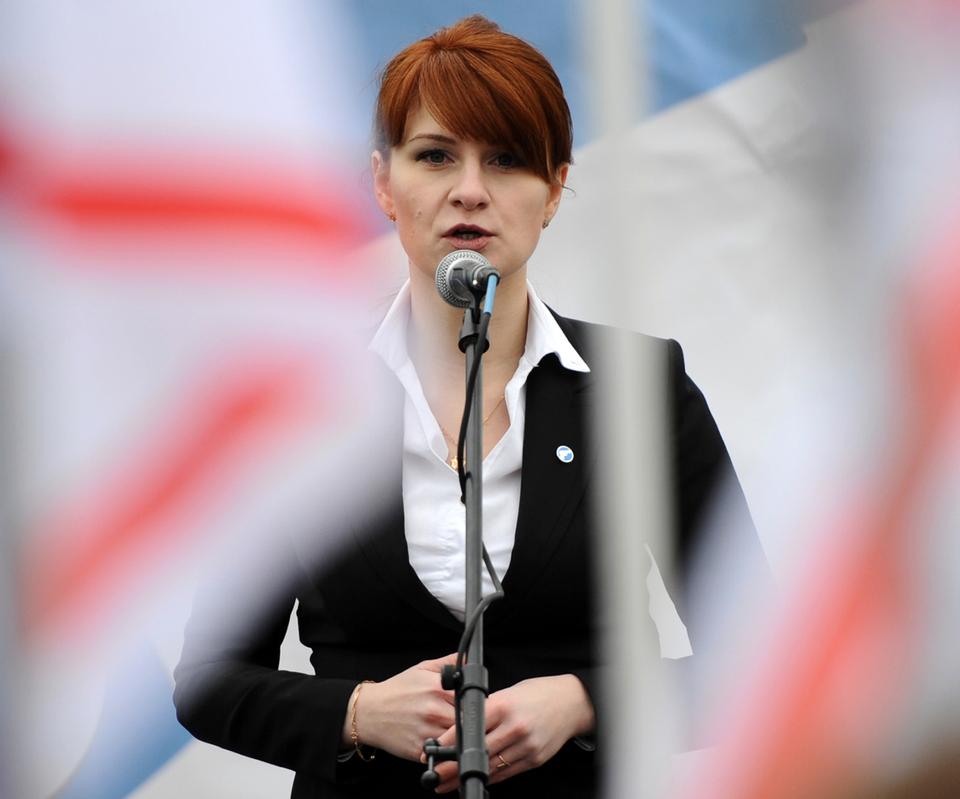 Maria Butina, leader of a pro-gun organisation in Russia, speaks to a crowd during a rally in support of legalizing the possession of handguns in Moscow, Russia. April 21, 2013. (AP)

It said Butina and the official sought to develop relationships with US politicians to create “back channel” lines of communications that could be “used by the Russian Federation to penetrate the US national decision-making apparatus.”

Among the relationships forged by Butina were ties with a “gun rights organisation,” which again was not identified but which is widely reported to be the NRA, a strong ally of the Republican Party.

Butina was a gun rights activist with a Russian group called the Right to Bear Arms and Torshin has long touted his connections with the NRA according to US media.

The announcement of Butina’s arrest was three days after 12 Russian intelligence operatives were indicted by a US grand jury for hacking Hillary Clinton’s 2016 presidential campaign and the Democratic Party.

The charges were drawn up by Special Counsel Robert Mueller, the former FBI director who is looking into Russian interference in the November 2016 vote and whether any members of Trump’s campaign team colluded with Moscow.

Trump on Monday again denied any collusion between his campaign and the Kremlin and appeared to accept Russian denials of any meddling in US elections following his summit with Putin.

Putin also rejected claims by US intelligence agencies that Russia had interfered in the 2016 US presidential vote.

The New York Times reported that during the 2016 election campaign Butina had twice tried to broker secret meetings between Trump and Putin.

The charges against Butina were brought by the US Attorney’s Office for the District of Columbia and not by the Special Counsel.

Trump, who is not named in any of the documents charging Butina, also repeated on Monday that he considers the Mueller probe a “witch hunt.”

Besides the 12 Russian intelligence agents, Mueller’s team has indicted 13 Russians and three companies for allegedly interfering in the presidential vote.

Former Trump campaign chairman Paul Manafort has been charged with money laundering and other crimes, while former national security adviser Michael Flynn has admitted lying to the FBI.