A suicide bomber hit a political gathering in Mastung district of Balochistan at least killing 128 people, including BAP candidate Mir Siraj Raisani, and wounding more than 200 others. 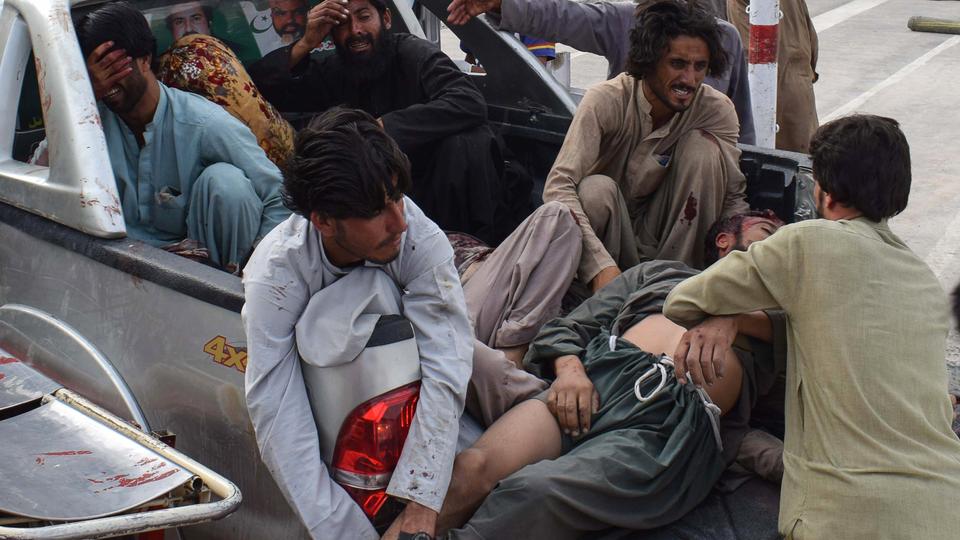 A victim of a bomb blast is brought to a hospital in Quetta on July 13, 2018 following an attack at an election rally. (AFP)

A suicide bomber killed 128 people at an election rally in southwestern Pakistan in the second election-related attack on Friday, officials said, amid growing tensions over ousted prime minister Nawaz Sharif’s return ahead of the July 25 vote.

Earlier he had also confirmed that the blast was carried out by a suicide bomber and that the explosion had  killed Siraj Raisani, who was running for a provincial seat with the newly-formed Balochistan Awami Party (BAP).

The Daesh terrorist group claimed responsibility for the suicide attack in Balochistan. The claim could not be independently verified.

The bombing was the biggest attack in Pakistan in over a year and is the third incident of election-related violence this week.

“My brother Siraj Raisani has been martyred,” said Haji Lashkari Raisani, another brother who is also contesting a national assembly seat from Balochistan.

Raisani is the second electoral candidate to be killed in pre-election violence this week.

Police had earlier said that more than 1,000 people were in attendance at the rally.

According to senior provincial official Saeed Jamali, the bomber detonated in the middle of a compound where a political meeting was taking place. Another senior official, Qaim Lashari, also confirmed it had been a suicide blast.

Police had earlier said that the attack targeted Raisani’s convoy but later changed their statement as video footage of a large tent showing damage from the blast was circulated.

The explosion comes hours after four people were killed and 39 injured when a bomb hidden inside a motorcycle detonated near a Pakistani politician’s convoy in the country’s northwest on Friday, near the Afghan border.

The earlier bomb, near the town of Bannu in Khyber Pakhtunkhwa province, was targeting the convoy of  Muttahida Majlis-e-Amal (MMA) candidate and former minister, Akram Khan Durrani, who survived the attack, police said. No group has yet claimed responsibility.

With the July 25 polls in the country fast-approaching, there has been a spike in violence with three major attacks targeting election campaign events and candidates during the past week.

On Tuesday a bomb claimed by the Tehreek-i-Taliban Pakistan (TTP) militant gorup targeted a rally by the Awami National Party (ANP) in the city of Peshawar. Hospital officials said Friday that the toll in that attack had risen to 22.

Local ANP leader Haroon Bilour was among those killed. Thousands flocked to his funeral the next day.

Bilour was part of the predominantly secular, ethnic Pashtun nationalist Awami National Party, which has long competed with religious parties for votes in Pakistan’s volatile Pashtun lands, along the border with Afghanistan.

His father, senior ANP leader Bashir Bilour, was killed in a suicide bombing in late 2012, in the run-up to Pakistan’s last election.

Following the attacks, activists called for Pakistani authorities to remain vigilant to protect candidates during the final days of the campaign season.

“The Pakistani authorities have a duty to protect the rights of all Pakistanis during this election period – their physical security and their ability to express their political views freely, regardless of which party they belong to,” said Omar Waraich, deputy South Asia director at Amnesty International.

Militants have targeted politicians, religious gatherings, security forces and even schools in Pakistan.

But security across the country has dramatically improved since government and military operations cleared large swathes of territory near the Afghan border in recent years.

Analysts warn however that Pakistan has yet to tackle the root causes of militancy.