After securing Damascus in May, regime leader Bashar al Assad is determined to oust rebels from a key southern region bordering Jordan and the Israeli-occupied Golan Heights. 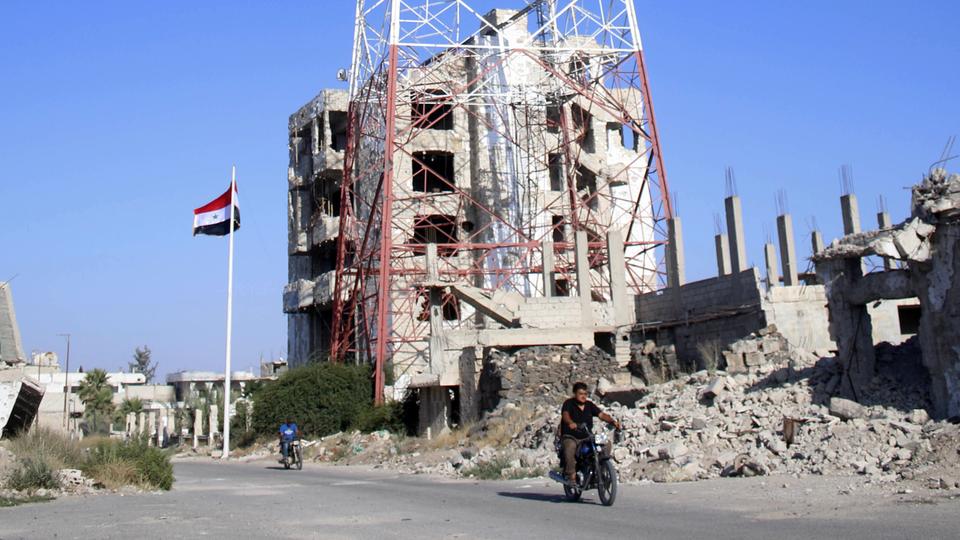 A man rides a scooter in front of the Syrian national flag, raised in a street in Daraa al Balad, an opposition-held part of the southern Syrian city of Daraa, on July 12, 2018. (AFP)

Syrian regime forces entered rebel-held parts of Daraa city on Thursday, state media said, raising the national flag in the cradle of the uprising that sparked the country’s seven-year war.

After securing Damascus in May, regime leader Bashar al Assad is determined to oust rebels from a key southern region bordering Jordan and the Israeli-occupied Golan Heights.

A ceasefire announced last week stemmed nearly three weeks of regime bombardment on the southern province of Daraa, including the symbolic provincial capital of the same name.

Until then, the northern half of Daraa city was in regime hands, while the opposition held out in its southern neighbourhoods including Daraa al Balad.

Late Wednesday, it had said the regime and rebels had reached a deal for opposition fighters to hand over their heavy weapons in opposition-held parts of the city.

On Thursday, an AFP correspondent in Daraa al Balad saw a convoy of Russian military police and regime officers enter the city with journalists to raise the flag.

But the Syrian Observatory for Human Rights, a Britain-based war monitor, said the flag raising on Thursday was merely “symbolic.”

Measures to implement the so-called reconciliation deal for rebel-held parts of the city had not yet been implemented, it said.

“The rebels are still inside Daraa city,” Observatory head Rami Abdel Rahman said, but have not yet handed over their heavy weapons, and there were no signs of any evacuations.

Under the deal, “those [rebels] who want to settle their status with the regime will hand over their heavy weapons, keep their light arms and remain in the city,” he said.

“Those who refuse the deal will head out towards the north of Syria.”

The reconciliation deal for Daraa city is the latest in a string of such agreements that have seen the Russia-backed regime retake large parts of the country since 2015.

Previous such deals have seen thousands of rebels bussed up to areas still under opposition control in the north of the country.

The regime retaking full control of Daraa city will be a hugely symbolic blow to the opposition.

In 2011, teenagers were arrested for scrawling anti-Assad slogans on the walls of a school in the poverty-stricken city, sparking mass protests against the regime.

Several of those teenagers picked up arms after the uprising developed into a full-fledged conflict that has since killed more than 350,000 people and displaced millions.

The war has since 2011 grown in complexity, drawing in world powers and a bunch of militant groups.

The ceasefire deal for Daraa excludes Daesh and affiliated militants, who control a small corner of the province on the border with both Jordan and the occupied Golan Heights.

Overnight on Wednesday, a Daesh affiliate seized a village east of that pocket from rebels who had agreed to a regime takeover.

The Jaish Khaled bin Walid group took control of Heet village after deadly clashes, as well as Russian and regime air strikes against them, the Observatory said.