A late-night official quick count from electoral authorities forecast that leftist Andres Manuel Lopez Obrador would win with at least 53 percent of the vote, a margin not seen in the country for many years. His rivals have conceded the race. 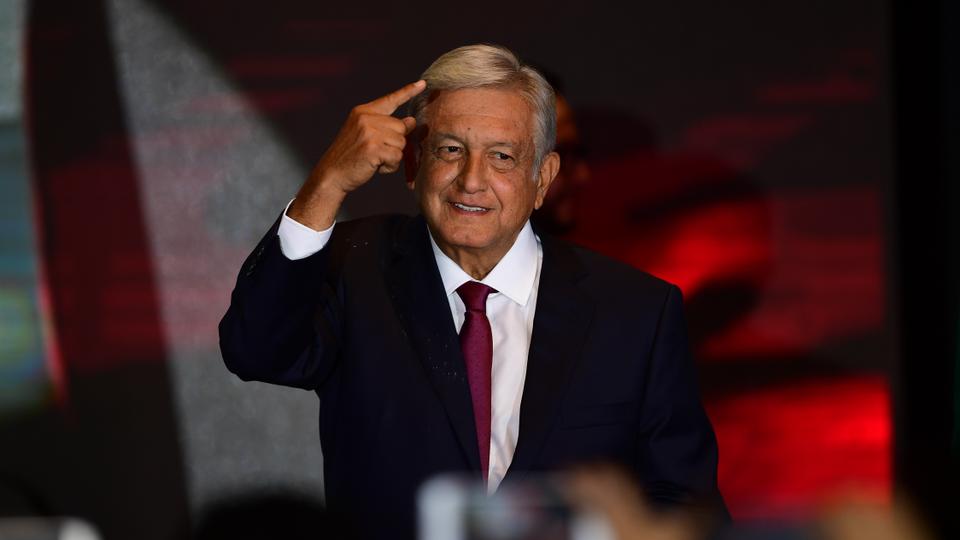 Anti-establishment leftist Andres Manuel Lopez Obrador won Mexico’s presidential election on Sunday by a large margin, after electoral authorities announced that a quick count forecast he had won over half the votes, a remarkable mandate not seen in the country for many years.

Lopez Obrador’s victory marks a shift to the left for Latin America’s second-largest economy and a major break with the two parties that have governed Mexico for nearly a century, the ruling Institutional Revolutionary Party (PRI) and conservative National Action Party (PAN).

Andres Manuel Lopez Obrador said he supports reaching a deal to renegotiate the North American Free Trade Agreement with the United States and Canada. Those talks have been stalled over the Trump administration’s demands for higher US content and a “sunset clause” in the 1994 trade agreement.

Lopez Obrador said he’ll propose that his own team of experts be included in the talks. The winning candidate said he will make that proposal in a meeting on Tuesday with current President Enrique Pena Nieto.

Lopez Obrador told the Televisa network on Monday that he will respect the current team of negotiators, and let them continue representing Mexico until he takes office on December 1.

Lopez Obrador said he wants to have information on what’s being discussed and “to help as much as we can.”

According to a preliminary count from the country’s electoral commission, Lopez Obrador secured around 53 percent of the national vote for Los Pinos.

Thousands of Lopez Obrador’s supporters flooded the Zocalo, Mexico City’s main square, to celebrate their candidate’s victory, his third try at winning the presidency of the country.

In a speech, Lopez Obrador called for reconciliation after what he called a “historic day.”

Lopez Obrador vowed that profound change is coming, but said individual and property rights will be guaranteed. He promised respect for the autonomy of the Bank of Mexico and said his government will maintain financial and fiscal discipline.

He also said that contracts obtained under energy reforms will be scrutinised for any corruption or illegality, but said there will be no confiscation or expropriation of property.

Outgoing President Enrique Pena Nieto said in a televised message to the nation that he had congratulated Lopez Obrador.

Anaya, who ran for a PAN-led coalition, said he had called Lopez Obrador to concede. “I recognise his victory and express my congratulations, and I wish him the greatest of success, for the good of Mexico,” he told supporters.

Meade said the leftist had “won the majority,” adding, “I wish Andres Manuel the greatest of success.”

Mexicans earlier lined up to vote for a new president on Sunday in an election tipped to hand power to an anti-establishment outsider who would inject a new dose of nationalism into government and could sharpen divisions with US President Donald Trump.

Trump, however, tweeted to congratulate Obrador on his election victory.

“Congratulations to Andres Manuel Lopez Obrador on becoming the next President of Mexico. I look very much forward to working with him. There is much to be done that will benefit both the United States and Mexico!” said his tweet.

Congratulations to Andres Manuel Lopez Obrador on becoming the next President of Mexico. I look very much forward to working with him. There is much to be done that will benefit both the United States and Mexico!

Lopez Obrador would become the first leftist to become president in decades in Mexico, Latin America’s No 2 economy, following an election marred by more than 100 murders of politicians by suspected drug gangs.

Runner-up in the 2006 and 2012 elections, Lopez Obrador pitches himself as the only man capable of cleaning up a political class whose credibility has been ground down by persistent graft, soaring crime levels and years of subpar economic growth.

“We are tired of so much corruption,” said Jose Alfredo Ortiz, a 32-year-old shopkeeper who planned to vote for Lopez Obrador in the gritty Mexico City suburb of Ecatepec.

“What people want is a change, somebody who will govern differently.”

“The new president of Mexico will have moral and political authority to demand everyone behaves with integrity and make honesty a priority as a way of life,” Lopez Obrador said in his campaign finale in a football stadium in the capital on Wednesday.

Campaigning relentlessly around Mexico for the past 13 years, Lopez Obrador has watched political careers rise and fall as established parties were consumed by the country’s social and economic problems and the responsibility of power.

Lopez Obrador, 64, has been vague on policy details. Seeking to harness support from economic nationalists, leftist liberals and social conservatives, he has vowed to reduce inequality, improve pay and welfare spending, as well as run a tight budget.

A vocal opponent of the government’s economic agenda, his criticism has been tempered by business-friendly aides.

But he has played with the idea of referendums to resolve divisive issues like whether to continue with Pena Nieto’s opening of the oil and gas industry to private capital. 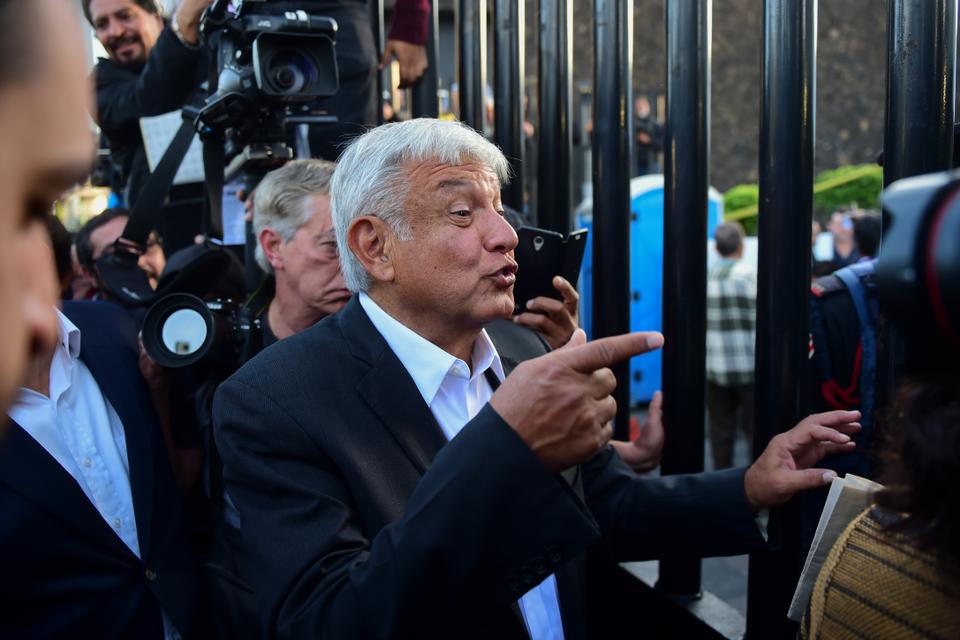 His rivals Ricardo Anaya, an ex-leader of the centre-right National Action Party (PAN) heading a right-left alliance, and PRI candidate Jose Antonio Meade, a former finance minister, differ only in nuance in their support of the energy reform.

Their efforts to catch Lopez Obrador have been hampered by attacks on each other, allowing him to build a lead that some opinion polls have put in excess of 20 percentage points. They also represent the only two parties to have ruled modern Mexico.

If victorious, Lopez Obrador faces a tougher security situation than did Pena Nieto. The election campaign has been the bloodiest in recent history, and murders are at a record high.

The next president will also inherit a simmering dispute with Trump over migration and trade, with talks to rework the North American Free Trade Agreement (NAFTA) unresolved, pressuring Mexico’s peso currency.

Trump has threatened to pitch North America into a costly trade war over NAFTA, and his insistence that Mexico pay for his desired border wall has deeply angered many Mexicans. 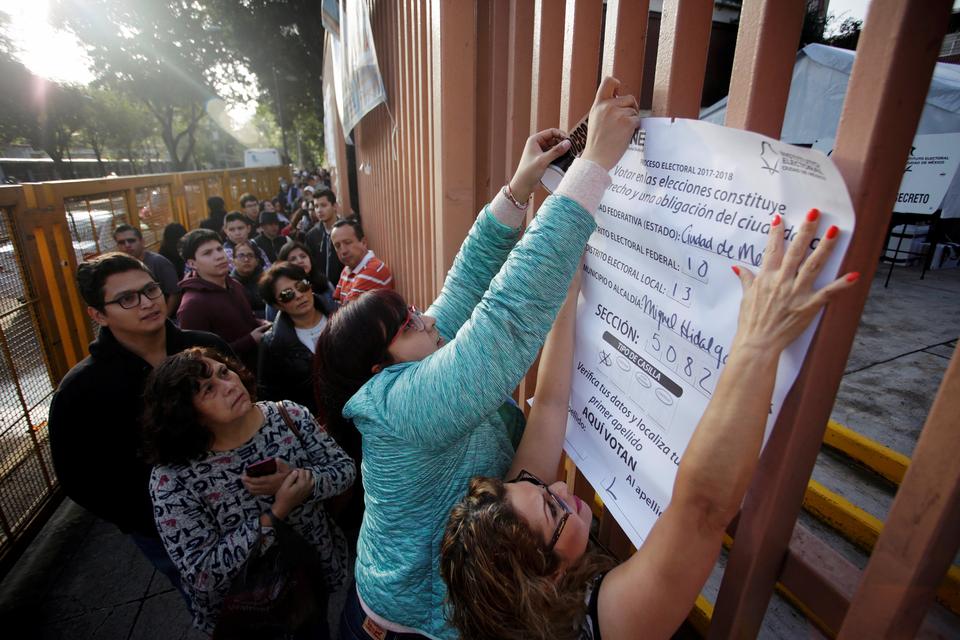 Poll workers place a sheet with the information of the polling station as people wait to cast their vote for the presidential election in Mexico City. (Daniel Becerril/Reuters)

Lopez Obrador has moved carefully and wants to broker a deal with Trump under which Mexico would work to rein in illegal immigration in return for economic support.

How much heft Lopez Obrador can bring to bear both domestically and internationally will depend significantly on his control of Congress, where no party has held an outright majority since 1997.

Polls suggest his National Regeneration Movement (MORENA), a party that has only existed formally since 2014, could be close to reaching a majority. However, markets may react negatively if voters give him too free a hand in Congress.

Lopez Obrador has been a divisive figure in Mexico since bringing much of the capital to a standstill for weeks with massive demonstrations to protest his 2006 election loss.

His commanding poll lead this time around has led analysts to question how deep-rooted the support really is.

“There’s a sense of poor old [Lopez Obrador], he’s not had a go yet. It’s his turn. We may as well give it a shot,” said Sofia Lara, 25, a graphic designer in Mexico City backing Anaya.

“Congratulations to Andres Manuel Lopez Obrador on becoming the next President of Mexico,” US President Donald Trump tweeted. “I look very much forward to working with him.”

“There is much to be done that will benefit both the United States and Mexico!”

“I congratulate the Mexican population and its president-elect @lopezobrador_. May the wide avenues of sovereignty and friendship of our populations be opened,” Venezuela’s embattled President Nicolas Maduro tweeted.

“We share common goals, strong people to people ties, and a mutually beneficial trading relationship that is the envy of the world – reflected in our joint effort to update the North American Free Trade Agreement for the 21st century.”

“We are sure that your government will write a new page in the history of Latin American dignity and sovereignty,” Bolivian President Evo Morales tweeted.

Juan Manuel Santos, Colombia’s outgoing president, tweeted hope that Lopez Obrador would “maintain the excellent relations we have had between our two countries.”

“With @lopezobrador_ we will continue to strengthen the deep ties of friendship according to the well-being of our people,” tweeted Salvador Sanchez Ceren, El Salvador’s president.