Chaos in Merkel’s coalition after key minister offers to resign

German Chancellor Angela Merkel is attempting to end a migration, refugee and asylum row with her conservative allies by holding more talks with Interior Minister Horst Seehofer who has offered to resign. 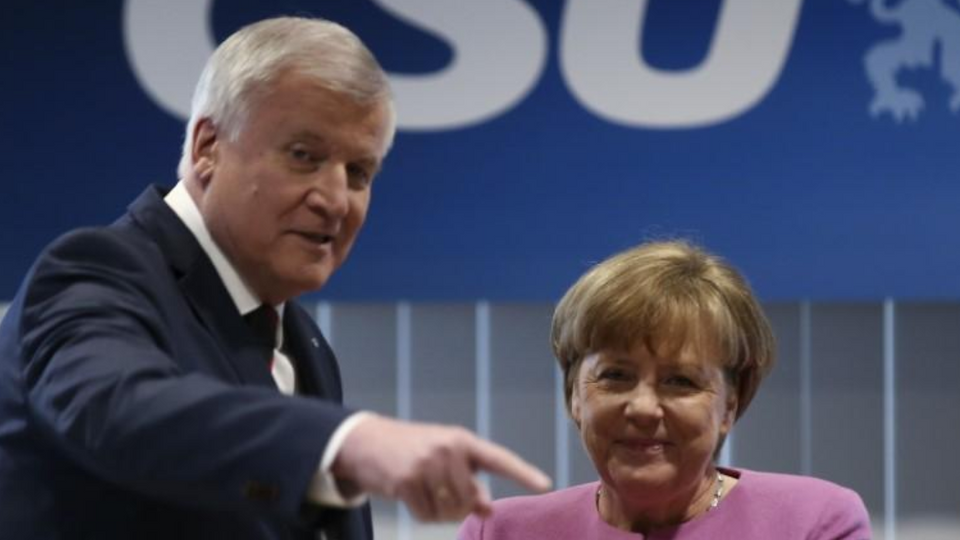 German Chancellor Angela Merkel on Monday will make a last-ditch effort to end a migration row with her conservative allies by holding more talks with her interior minister, whose offer to resign cast doubt over whether her fragile government can survive.

Horst Seehofer offered to quit his ministerial post and the chairmanship of the Bavarian Christian Social Union (CSU) at a marathon party meeting on Sunday to discuss whether immigration proposals Merkel brought back from Brussels last week were acceptable.

But he was then persuaded by party colleagues to have one more meeting with Merkel on Monday to try to resolve the long-standing row and said he would make his final decision within three days.

Merkel’s CDU relies on CSU to maintain power through a coalition, also including the Social Democrats (SPD), formed three months ago after an election in September.

The ructions in Berlin were putting pressure on the euro early on Monday while Germany’s top share index opened more than one percent lower.

Officials from the Bavaria-based CSU accused Merkel of rejecting several compromise proposals made by Seehofer to heal the rift with her own CDU.

Seehofer, who has demanded that Merkel toughen her open-doors refugee policy, told colleagues on Sunday that in spite of the measures agreed with EU leaders, he saw no alternative to turning some migrants back at the border.

In an extremely fluid situation, Merkel and Seehofer are due to meet later in the day and before that, a joint session of the parliamentary groups of the CSU and CDU is due to take place, although there was some doubt if it would go ahead.

Crucially for Merkel, CDU lawmakers are backing her – so far.

Hans-Peter Friedrich, a member of the CSU leadership, said that Merkel’s rejections of compromises submitted by Seehofer suggested she was happy to see him go.

“Now it depends on whether Horst Seehofer draws his own conclusions,” Friedrich told Deutschlandfunk public broadcaster. “Her attitude feeds the suspicion that she would happily accept Horst Seehofer’s resignation.”

CSU leaders are divided over how to face down a challenge from the anti-immigration Alternative for Germany (AfD) in October’s regional election.

Seehofer told party colleagues at an executive committee meeting on Sunday that discussions with Merkel had been fruitless, according to a party source.

One possibility is for the 70-year-old CDU and CSU alliance to split which would rob Merkel of her parliamentary majority. This could see to her trying to lead a minority government, or possibly new elections.

In the meantime, Bavaria state premier Markus Soeder said that Bavaria does not want to risk the stability of the German government, adding he hoped for a compromise with Merkel in the migrant policy row.

“There are many possible compromises, including some that we have offered, to reach a solution and this is very important.And we hope this is still possible. One thing is clear: the stability of the government is not a question for us.” Soeder, said at an event in Passau on Monday.