Trump signed an executive order requiring immigrant families be detained together when they are caught entering the country illegally for as long as their criminal proceedings take. 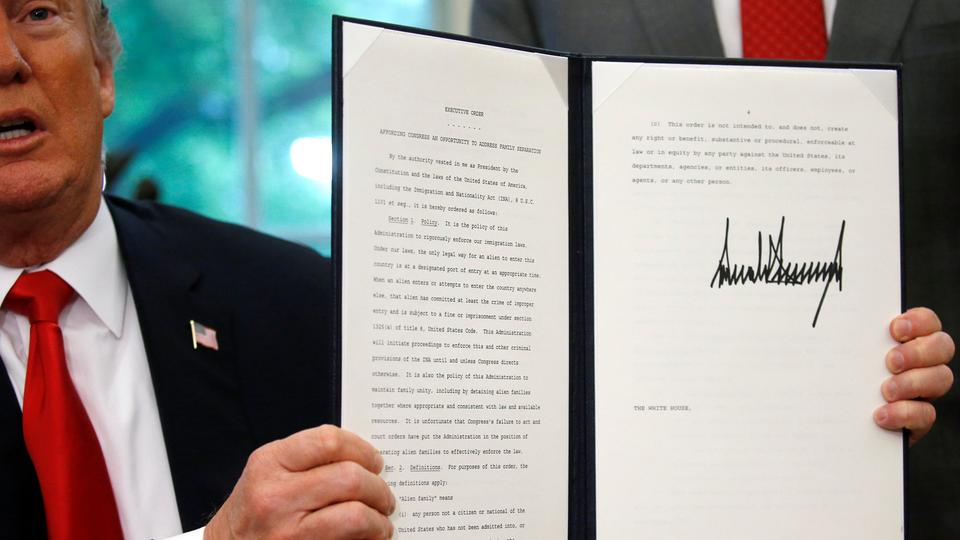 US President Donald Trump displays an executive order on immigration policy after signing it in the Oval Office at the White House in Washington, US, June 20, 2018. (Reuters)

US President Donald Trump on Wednesday backed down and abandoned his policy of separating immigrant children from their parents on the US-Mexico border, after images of youngsters in cages sparked outrage at home and abroad.

Trump signed an executive order requiring immigrant families be detained together when they are caught entering the country illegally for as long as their criminal proceedings take.

While that may end a policy that drew a rebuke from Pope Francis and everyone else from human rights advocates to business leaders, it may also mean immigrant children remain in custody indefinitely.

The Trump administration still faces legal challenges because of a court order that puts a 20-day cap on how long immigration authorities might detain minors, and trigger fresh criticism of Trump’s hardline immigration policies, which were central to his 2016 election campaign and now his presidency.

Administration officials were unable to clarify whether family separations would end immediately or when and how families now separated would be reunited.

“It is still very early and we are awaiting further guidance on the matter,” Brian Marriott, a spokesman for the Health and Human Services Department’s Administration for Children and Families. “Reunification is always the ultimate goal of those entrusted with the care of” unaccompanied children and “the administration is working towards that” for those in custody.

Video footage of children sitting in cages and an audiotape of wailing children had sparked anger as the images were broadcast worldwide.

The Trump order, an unusual reversal by him, moves parents with children to the front of the line for immigration proceedings but it does not end a 10-week-old “zero tolerance” policy that calls for prosecution of immigrants crossing the border illegally under the country’s criminal entry statute.

“It’s about keeping families together while at the same time making sure that we have a very powerful, very strong border,” Trump said as he signed the order in a hastily arranged Oval Office gathering.

Governments from Central America and Mexico welcomed Trump’s decision on Wednesday, but said they would remain vigilant to ensure the rights of their citizens were respected.

Trump’s wife, Melania Trump, in private conversations with the president, urged him to do something to end the humanitarian crisis, a White House official said.

In the Oval Office, Trump said he had also heard from his daughter and aide, Ivanka Trump, about the policy.

Wednesday’s move was the most significant policy reversal by Trump since he took office in January 2017. Instinctively combative and fond of chaos, Trump usually digs in on controversial policies, rather than backing down.