Unconvinced by the election, Venezuela emigres stream across border

“People aren’t voting anymore because they know that it’s rigged. If we had any hope that this would change, we wouldn’t be migrating,” says Deiver Guarate, a construction worker. 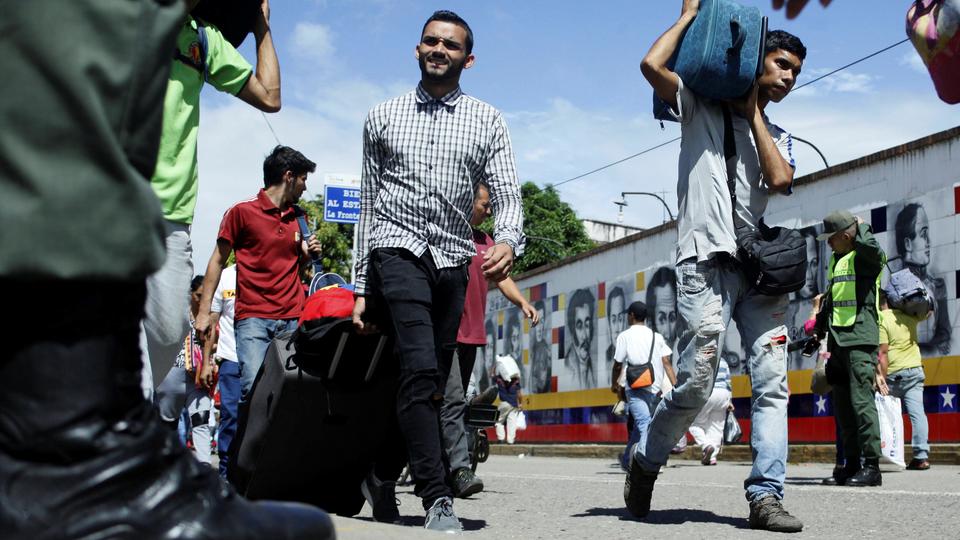 People cross the Colombian-Venezuelan border over the Simon Bolivar international bridge in San Antonio del Tachira, Venezuela on May 16, 2018. (Reuters)

Crouched on a sidewalk near Venezuela’s border with Colombia, construction worker Deiver Guarate said Sunday’s presidential election has already been decided in favour of President Nicolas Maduro, and he did not plan to stay around to hear the results.

Unable to cover even the most basic of expenses amid hyperinflation, Guarate was emigrating to Colombia and had to spend the night on the street as he waited for overwhelmed Venezuelan migration authorities to stamp his passport.

“People aren’t voting anymore because they know that it’s rigged. If we had any hope that this would change, we wouldn’t be migrating,” said Guarate, 35, huddled beside suitcases on a street were several hundred people have been sleeping this week.

“The situation in Venezuela is critical,” said Guarate, whose grandmother died last year of kidney problems because the family was unable to obtain medicine due to drug shortages.

Venezuela’s opposition has called on supporters to sit out Sunday’s vote due to concerns of fraud but tens of thousand of migrants are so skeptical of the election that they prefer to leave.

They are flocking to border towns like San Antonio, where they anxiously push through streets crowded with informal vendors under sweltering sun to escape a country where a monthly minimum wage can at best buy a few pounds of rice.

Maduro challenger Henri Falcon, who is breaking the boycott to face his rival, insists that a massive turnout by discontented Venezuelans would bring about change.

Many among the opposition, however, believe Falcon is legitimising a rigged process, which governments around the world including the United States and Latin American neighbors have condemned.

Maduro, who insists the election is free and fair, has warned migrants they would face difficult circumstances abroad and recently said some are now “cleaning toilets.”

He has said that Venezuela’s situation has been caused by an “economic war” led by US-backed adversaries.

The Information Ministry did not respond to a request for comment.

In April, Maduro launched a program called “Return to the Fatherland” meant to raise money forVenezuelans who sold their possessions to emigrate, then wanted to return.

In San Antonio, migrants carrying tatty bags with their belongings did not believe the government would help them or that the vote represented an opportunity for change.

“The situation is just too difficult. Money doesn’t buy anything,” said Alejandro Lugo, 25, a bodyguard who planned to settle in Colombian capital Bogota.

“On Sunday there are elections. We all know what’s coming. They know the results already,” Lugo said.

The border is closed over the weekend as a security measure during the election, so migrants would have to wait until Monday to cross or cut through dozens of illegal paths.

The United Nations has estimated that 1 million Venezuelans left the country between 2015 and 2017.

Some 13,000 per day leave in search of a new life from the Venezuelan state of Tachira, the most heavily trafficked border crossing state, according to Venezuelan military sources working in the area who asked not to be identified.

Another 50,000 leave and return the same day or shortly after, the sources said.

Emigres who carry on get their passports stamped, then walk across the Simon Bolivar bridge with suitcases and backpacks to reach Colombia or continue on by bus toward Ecuador or Peru.

The exodus of the last year has put a strain on neighboring Latin American countries, whereVenezuelans are routinely seen sleeping on the streets.

Maduro halted vehicle traffic over the bridge three years ago. Sweaty pedestrians now line up in the heat to get through Colombia’s border check point.

Some cross to buy goods that have run short in Venezuela such as diapers or flour, while others smuggle goods to the Colombian border city of Cucuta, one of the few remaining ways to consistently make a living.

“Here your money won’t buy anything, no matter how much you make,” said Wilma Morales, 50, a lawyer, waiting to cross the border on her way to Peru. “For me there are no elections. I’m not going to be legitimising a dictatorship.”