Venezuelan President Nicolas Maduro is expected to win a second six-year term in Sunday’s election, despite a deepening crisis that’s made food scarce and inflation soar as oil production in the once wealthy nation plummets. 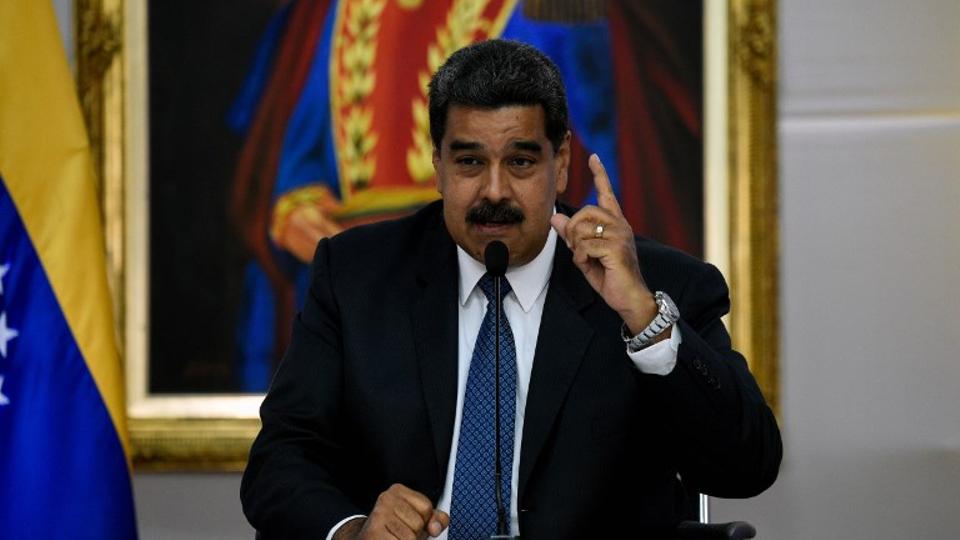 Venezuelan President Nicolas Maduro, speaks during a meeting with the international observers for the upcoming May 20 election, at the Miraflores presidential palace in Caracas on May 18, 2018. (AFP)

Venezuelans, reeling under a devastating economic crisis, vote on Sunday in an election boycotted by the opposition and condemned by much of the international community but expected to hand deeply unpopular President Nicolas Maduro a new mandate.

Maduro, the political heir to the late leftist firebrand Hugo Chavez, has presided over an implosion of once wealthy oil producer Venezuela’s economy since taking office in 2013. 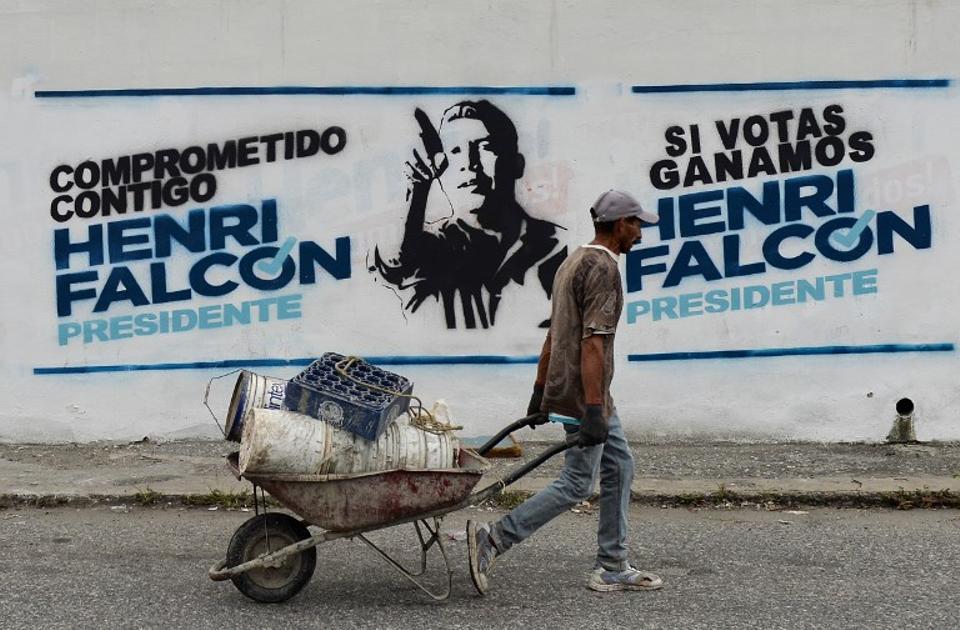 Maduro, with a tight grip on the electoral and military authorities, faces a bitterly divided opposition which has called for a boycott.

Here is a look at why opposition parties are boycotting the election.

Teresa Paredes, 56-year-old housewife, said that “for the first time in my life I am not going to vote because we are living a dog’s life, without medicines, without food.”

Alvaro Toroa, 64-year-old retiree from the opposition stronghold of eastern Caracas, said he cast his ballot because “this has to be ended. Falcon is able to bring disaffected Chavists and the opposition.”

Aware of the popular mood, Maduro on Saturday promised an “economic revolution” if re-elected.

“We are defending… the right to a just and prosperous future,” he said on Twitter.

People pass by a graffiti depicting the eyes of late president Hugo Chavez, during a campaign rally by Venezuelan President Nicolas Maduro, in Charallave, about 65 km from Caracas, on May 15, 2018. (AFP)

Some 20.5 million people are eligible to vote in a one-round election to choose a president for a six-year term that will begin in January 2019.

Presidential elections are traditionally held in December, but they were moved up this year by the country’s all-powerful Constituent Assembly, catching the divided and weakened opposition off-guard.

The Democratic Unity Roundtable (MUD) opposition coalition, increasingly pinning its hopes for change on outside pressure forcing the socialists to remove Maduro, has won support from the US, EU and 14 countries of the Lima Group who have called for the vote to be postponed.

The powers accuse Maduro of undermining democracy, usurping the power of the opposition-dominated legislature by replacing it with his Constituent Assembly, and cracking down on the opposition.

Protests in 2017, still fresh in the collective memory, left around 125 dead.

The MUD’s most popular leaders have been sidelined or detained, the boycott their only remaining weapon.

Washington has dismissed the vote as a “sham” to keep Maduro in power, and has slapped sanctions on Caracas in a push to isolate his regime.

Despite holding the world’s largest oil reserves, the country faces ruin, with the IMF citing a drop of 45.0 percent in GDP since Maduro took over in 2013.

The crippled oil industry lacks investment and its assets are increasingly prey to debt settlements as the country defaults.

And worse, the US threatens an oil embargo on top of the sanctions that have hit Venezuela’s efforts to renegotiate its debt.

“The key factors will be the economy and the army,” said analyst Michael Shifter. “The country is a powder keg and something could provoke unrest that would be difficult to contain.” 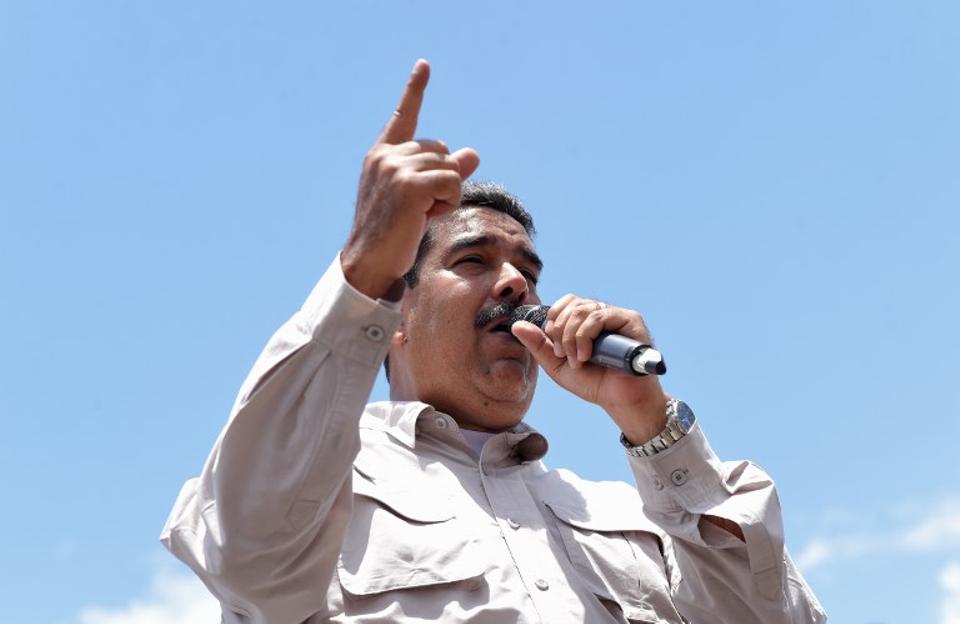 Venezuelan President Nicolas Maduro delivers a speech during a campaign rally in Charallave, about 65 km from Caracas, on May 15, 2018. (AFP)

A look at main candidates

* The 55-year-old former union leader and bus driver does not have a university degree and proudly calls himself Venezuela’s first “worker president.”

* Maduro has long promoted himself as the heir to “Chavismo,” the political movement begun by his late predecessor, Hugo Chavez. His policies have remained very much in line with the maverick former leader.

* Maduro first entered politics in 2000 as a National Assembly legislator. He rose to become the body’s president, a role his powerful wife, Cilia Flores, would eventually take over.

* In late 2012, Chavez, suffering from cancer, named Maduro vice president before endorsing him as his heir. “He was a bus driver. How the bourgeoisie mock him!” Chavez laughed.

* That vote of confidence helped Maduro narrowly win the presidency in an election in the April 2013, soon after Chavez’s death.

* Maduro blames Venezuela’s crisis on an “economic war” waged by Washington and the opposition. He promises to win that war should he be re-elected, although critics point to his lack of reforms over the last five years. 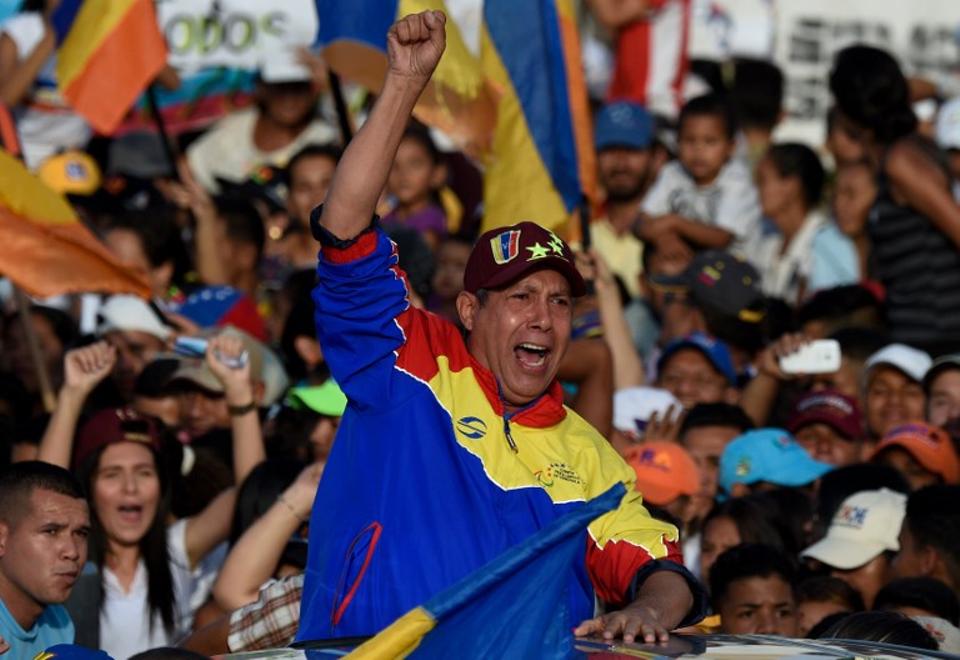 Venezuelan opposition presidential candidate Henry Falcon waves during the closing rally of his campaign ahead of the weekend’s presidential election, in Barquisimeto, Lara state, Venezuela on May 17, 2018. (AFP)

* Falcon is a 56-year-old former soldier and governor of Lara state. From humble roots, he studied law at a Caracas university.

* His candidacy has been criticised by much of the opposition, which decided to boycott the election. In the eyes of many, Falcon only serves to legitimise Maduro’s inevitable win.

* On the pro-government side, Falcon is widely seen as a traitor, having initially backed Chavez and then broken with the Socialist Party in 2010.

* His key policy is to dollarise Venezuela’s economy, replacing the bolivar, which has weakened well over 99 percent against the dollar since Maduro came to power. At rallies, he likes to give out mock $100 bills.

* If elected, he says he will give a monthly welfare stipend of $25 to every adult and $10 to every child, and raise the minimum monthly wage to $75. He would also end strict currency controls.

* Falcon and Wall Street heavyweight Francisco Rodriguez, his chief economic adviser, also plan to reform state oil company PDVSA, the government’s cash cow, by separating it from the Oil Ministry, asking the Organization of the Petroleum Exporting Countries to raise quotas and strengthening the role of foreign partners.

* Falcon plans to free more than 200 jailed activists and politicians should he be elected, and allow foreign humanitarian aid into Venezuela.

Venezuelan opposition presidential candidate and evangelical pastor Javier Bertucci speaks to supporters, during his campaign closing rally in Valencia, Venezuela on May 16, 2018. (AFP)

* An evangelical pastor, Bertucci, 48, currently trails both Maduro and Falcon in the presidential polls. He is the founder of the Maranatha Church, which says it has fed millions across Venezuela.

* Bertucci, like many evangelicals in Latin America, ardently opposes abortion and insists adoption should not be available for same-sex couples.

* His candidacy has gained more traction than expected, not least thanks to popular soup handouts, but he is still seen as having little chance of success. He has no known political experience and had little name recognition in Venezuela prior to running.