While polls show Venezuelans overwhelmingly blame Maduro for their mounting troubles, he’s still heavily favoured to win thanks to a boycott of the election by his main rivals. 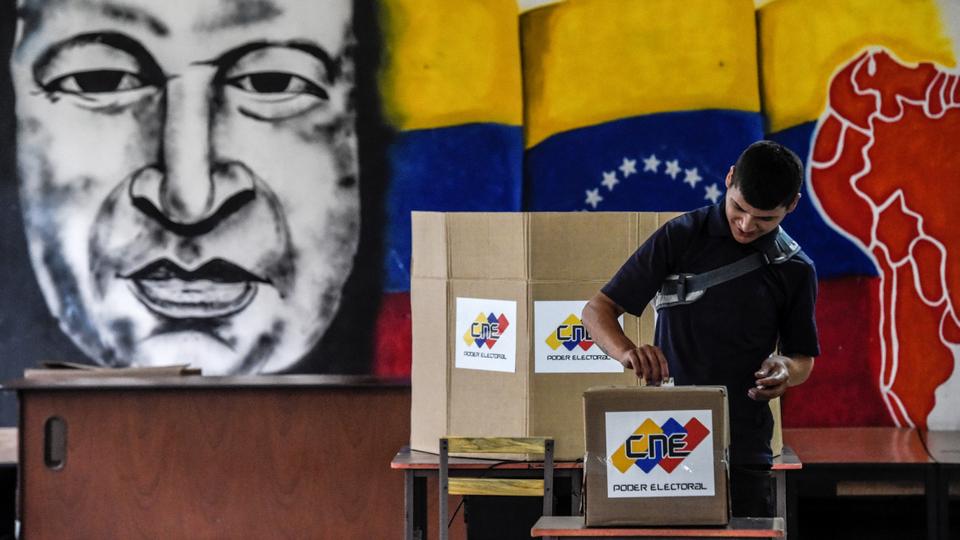 A man casts his vote in front of an image of late Venezuelan president Hugo Chavez, during the presidential elections at a polling station in Caracas on May 20, 2018 . (AFP)

Voting centers across Venezuela’s capital city appeared largely empty during elections on Sunday despite assurances from government officials that millions had turned out to vote by mid-morning.

President Nicolas Maduro is expected to handily win a second term amid a deepening crisis that’s made food scarce and inflation soar as oil production in the once wealthy nation plummets.

Poll workers at a voting center in San Agustin, a pro-government stronghold in Caracas, said less than a fifth of the 1,916 registered voters had cast a ballot, but they expected a mid-day surge.

While polls show Venezuelans overwhelmingly blame Maduro for their mounting troubles, he’s still heavily favoured to win thanks to a boycott of the election by his main rivals amid huge distrust of the nation’s electoral council.

More than 1 million Venezuelans have abandoned their country for a better life abroad in recent years, while those staying behind wait in line for hours to buy subsidised food and withdraw cash that’s almost impossible to find.

Maduro, setting an example for government supporters who he called on to vote early, cast his ballot in Caracas shortly after fireworks and loud speakers blasting a military hymn roused Venezuelans from sleep around 5 am local time.

He said Venezuelans would provide an example of democracy to the world and brushed back suggestions he was taking the country down an authoritarian path.

“It’s offensive when they say the Venezuelan people are falling under dictatorship,” he said after voting, adding that if he were to win the election he would seek an understanding with his opponents on a way forward for the crisis-wracked country. “I’m going to stubbornly and obsessively insist in dialogue for peace.”

Meanwhile, in Petare, home to Caracas’ biggest slum, voters waited in line to have their so-called “Fatherland Card” scanned by socialist party volunteers.

A woman wearing the red, yellow and blue colors of Venezuela’s flag scanned each card with her phone — a form of verifying that cardholders had done their patriotic duty of voting.

The existence of so-called “Red Points,” many just a few steps from voting centers, is an integral part of the government’s get out the vote machinery.

Maduro’s main rival, independent candidate Henri Falcon, said he had received at least 350 complaints from voters about the existence of the red points, some of which are inside voting centers.

Falcon called on election officials to shut them down, calling it a “pressure mechanism, an element of political and social blackmail” directed at a poorer sector of the population.

“If the opposition wants to do the same, they are free to do so,” said Rigoberto Barazarte, the owner of a small car wash business who wants to see a re-elected Maduro toughen his stance against elites he says are trying to sabotage Venezuela’s economy.

In the opposition stronghold of eastern Caracas, not all voters heeded a call to stay indoors in protest.

Nayra Martinez, a city employee and opposition activist, bucked her party’s call to abstain from casting her ballot, saying it’s no time to stop fighting.

“If you’re sick and the doctor gives you few days to live, you don’t lay in bed waiting to die,” she said. “You seek treatment.”

But in the opposition stronghold of eastern Caracas, the leafy streets were largely empty.

In the neighborhood of Los Palos Grandes, opposition supporter Henri Roldan, 62, said he’s not voting. Instead, he’s going to eat out at a restaurant, a luxury he now limits himself to only once a month since inflation has devoured his pension check.

“Our money just doesn’t stretch as far as it should,” said the retired computer technician, stopping near fountains at his neighborhood plaza to chat with friends. “Eating out is so expensive.”

Small groups of Venezuelan exiles held demonstrations in cities around the globe to protest their homeland’s presidential election, which they say is a farce.

Most of the protests Sunday had no more than a few dozen participants.

Protester Paulina Facchin in Peru’s capital said Venezuelans shouldn’t cast ballots in an election for which authorities have “already determined the winner.”

Opposition leaders have repeatedly tried to rekindle anti-government protests that drew thousands to the streets in Venezuela last year but have drawn small crowds.

Outside the country many Venezuelans have become resigned to building new lives abroad.

The election has drawn broad criticism since some of Maduro’s most-popular rivals were barred from running, and several more were forced into exile.

Echoing the views of Venezuela’s tattered opposition movement, the United States, European Union and many Latin American countries have said they won’t recognise the results.

Some question the wisdom of not competing in an election, even if it is widely seen as one-sided.

A 2010 study by the Brookings Institution covering 171 electoral boycotts around the world — from Afghanistan to Zimbabwe — found that such maneuvers rarely succeed in rendering elections illegitimate in the eyes of the world. Instead, the boycotting party usually emerges weaker and the incumbent empowered.

Javier Corrales, a Venezuela expert at Amherst College, said the opposition’s sit-out strategy could be as disastrous as its boycott of congressional elections in 2005, which led the ruling party to sweep all seats and pass legislation removing presidential term limits that further strengthened Chavez.