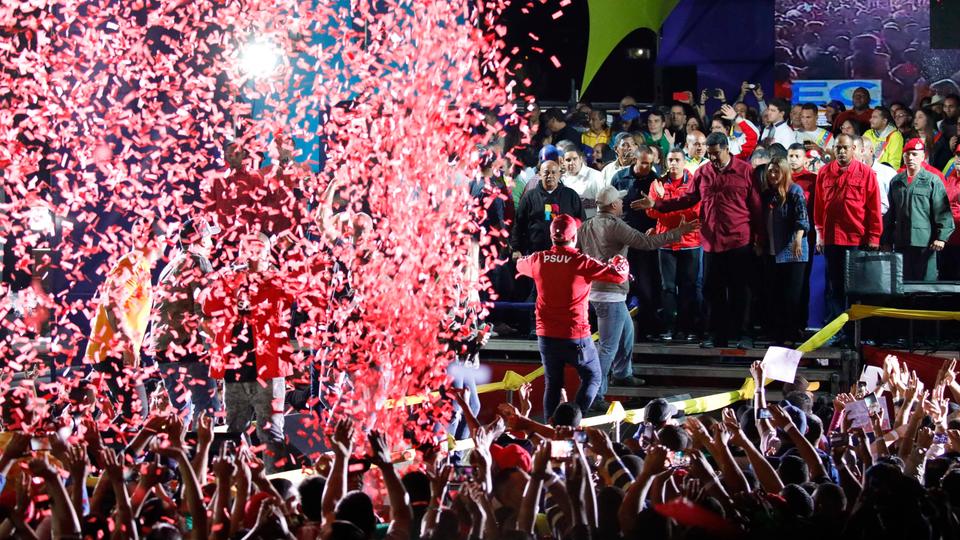 Confetti falls as supporters walk up to greet Venezuela’s President Nicolas Maduro (center, R, in red) during a gathering after the results of the election were released, outside of the Miraflores Palace in Caracas, Venezuela, May 20, 2018. (Reuters)

However, his leading challenger Henri Falcon questioned the legitimacy of a vote marred by irregularities and called for a new ballot to prevent a brewing social crisis from exploding.

The disputed victory is likely to heighten international pressure on Maduro, as voter turnout was the lowest in a presidential race since the start of Venezuela’s leftist revolution two decades ago.

Even as voting was taking place on Sunday, a senior State Department official warned that the US might press ahead on threats of imposing crippling oil sanctions on the nation that sits atop the world’s largest crude reserves.

The election “without any doubt lacks legitimacy and we categorically refuse to recognise this process,” Falcon told supporters before the results were announced. 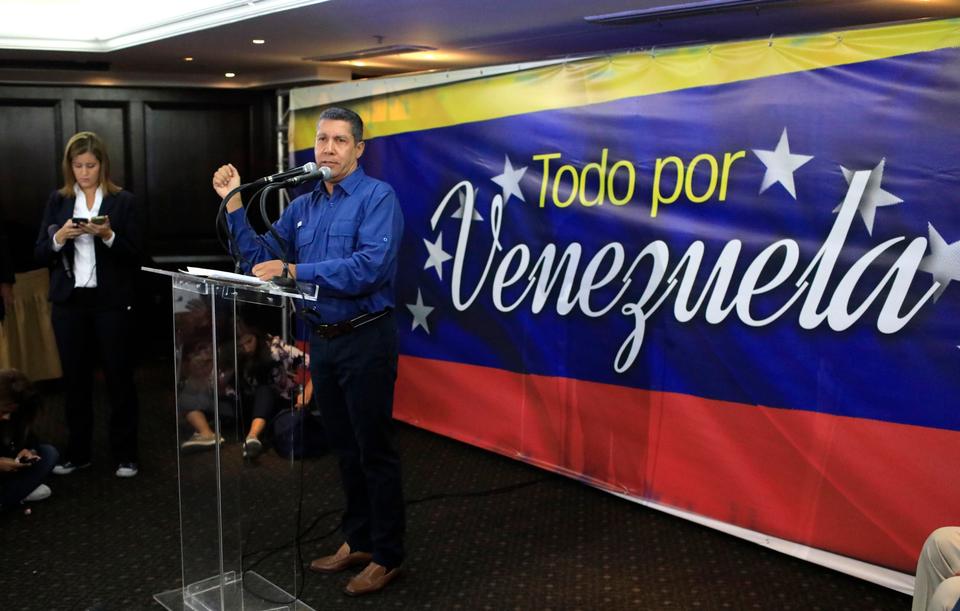 Venezuelan presidential candidate Henri Falcon reacts to the results of the election at Falcon’s press centre in Caracas, Venezuela, May 20, 2018. (Reuters)

Falcon was joined in his call for a new election by third-place finisher Javier Bertucci, who got around 11 percent of the vote. Bertucci, a TV evangelist, stopped short of challenging the results, saying what he called a mistaken opposition boycott also boosted Maduro.

But he said that in the event of a new vote, Maduro should do the dignified thing and refuse to run. If Maduro presses forward, he said, Venezuela would explode from a social crisis marked by widespread food shortages and hyperinflation before his new term starts next January.

TRT World’s Ediz Tiyansan has this report from the capital Caracas.

Both of Maduro’s opponents accused electoral authorities of turning a blind eye to a slew of blatant violations, including the establishment of red tents just steps away from voting centres where ruling party activists scanned on cellphones government-issued “Fatherland Cards.”

Many voters said they hoped it would bring them a cash bonus or even a free apartment.

National Electoral Council president Tibisay Lucena acknowledged a handful of complaints, but insisted they were minor compared to past elections.

He called them a “pressure mechanism, an element of political and social blackmail” directed at the poor.

Voting centres across Venezuela appeared largely empty for the election despite assurances from government officials that millions had turned out to vote by midmorning.

Turnout in the previous three presidential elections averaged around 79 percent. Chavez, after taking office in 1999, eliminated mandatory voting in Venezuela.

Opposition leaders said the lifeless voting centres were evidence that Venezuelans heeded their call to abstain from voting in an election they contended was certain to be rigged in favour of Maduro’s socialist policies.

Turnout figures in last year’s elections for a constitutional assembly, which the opposition also boycotted, were inflated by at least one million votes, according to the company that provided technology for Venezuela’s electronic voting machines for more than a decade.

Both Maduro and the two anti-government presidential candidates who broke with the opposition’s push to boycott the election had urged voters to go to the polls.

Maduro, setting an example for government supporters who he called on to vote early, cast his ballot in Caracas shortly after fireworks and loud speakers blasting a military hymn roused Venezuelans from sleep early morning.

He said Venezuelans would provide an example of democracy to the world and brushed back suggestions he was taking the country down an authoritarian path.

“It’s offensive when they say the Venezuelan people are falling under dictatorship,” he said after voting.

Maduro also said that if he won the election, he would seek an understanding with his opponents on a way forward for the crisis-wracked country.

“I’m going to stubbornly and obsessively insist in dialogue for peace,” he said.