Aid group Save the Children says thousands of children under 5 years may have died of acute malnutrition since the civil war began in 2015. Meanwhile, UN calls for peace in Hudaida fell on deaf ears as the Saudi-led coalition renewed air strikes. 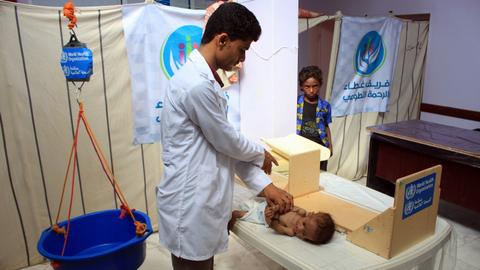 Aid group Save the Children on Wednesday said it believes that 85,000 children under age 5 may have died of severe acute malnutrition since Yemen’s civil war began in earnest with the Saudi-led intervention.

Cases of malnourished children have become a reflection of the health system in Yemen, where children bear the brunt of the war between the Saudi-backed government and the Iran-aligned Houthi rebels.

And while the United Nations is hoping for peace talks to take place in Sweden by the end of this year, the situation on the ground remains dire with millions of children starving.

“We are horrified that some 85,000 children in Yemen may have died because of extreme hunger since the war began. For every child killed by bombs and bullets, dozens are starving to death and it’s entirely preventable,” Tamer Kirolos, Save the Children’s Country Director in Yemen, said in a statement.

They found that approximately 84,701 children suffering from severe malnutrition may have died between April 2015 and October 2018.

Skin and bones, 10-year-old Ghazi Saleh lies on a hospital bed in the southwestern Yemeni city of Taez barely breathing. He only weighs eight kilogrammes.

Starving and too weak to move or even cry, Ghazi can only look down at his emaciated body as he struggles to keep his eyes open.

Some 14 million Yemenis are at risk of famine, more than four years into the country’s war.

At Al-Mudhafar Hospital where Ghazi is being treated, medics go from one bed to another to check on malnourished children – including infants.

Eman Ali, a nurse at the hospital, said that Ghazi suffers from acute malnutrition.

“He has not eaten properly for a while now, and he ultimately reached this situation,” she told AFP.

While some doctors and nurses weighed children, others tried to feed the young patients through syringes as they have become too weak to swallow.

Cases of malnourished children have become a reflection of the health system in Yemen, where children bear the brunt of the war between the Saudi-backed government and the Iran-aligned Houthi rebels.

“We receive such cases every day, and some of them are very terrible,” said Sona Othman, head of nutrition at Al-Mudhafar Hospital.

“Ghazi’s case was extremely bad and it mirrors the deteriorating health situation of the country.”

UN calls for truce in Hudaida fall on deaf ears

Fighting between Saudi-led coalition forces and Yemen’s Shia rebels flared up again around the Red Sea port city of Hudaida despite UN calls for a ceasefire, Yemeni officials and witnesses said on Tuesday.

The escalation, which followed a lull that had been in place since earlier this month, began late on Monday with coalition airstrikes hitting the rebels, known as Houthis, in and around Hudaida.

The renewed fighting undermines the latest UN efforts to end the three-year war. The US-backed, Saudi-led coalition has been battling the rebels since March 2015 to restore Yemen’s internationally recognized government to power.