Vintage plane crash in Switzerland kills all 20 on board

JU-Air’s JU-52 HB-HOT aircraft crashed in the Swiss Alps, killing all 20 people on board, police said. 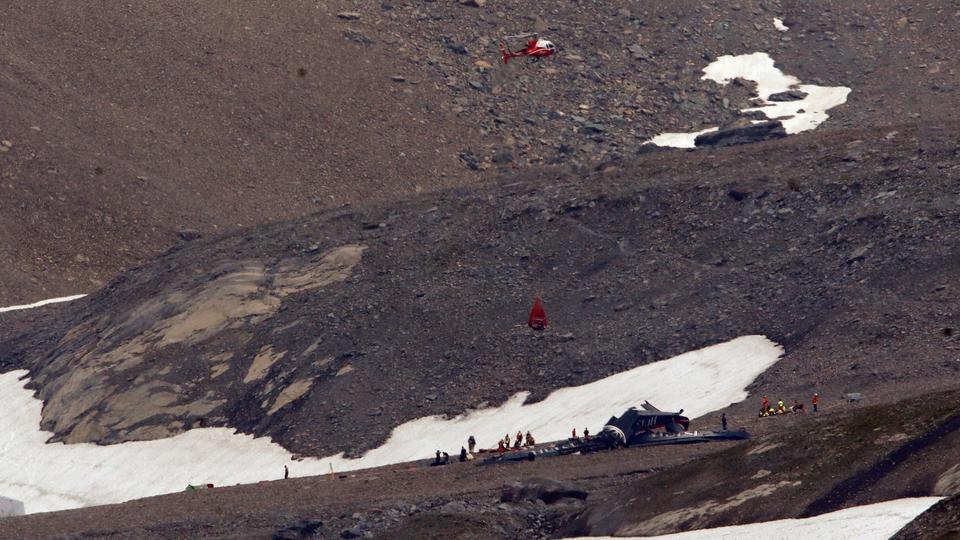 A general view of the accident site of a Junkers Ju-52 airplane of the local airline JU-AIR, in 2,450 metres (8,038 feet) above sea level near the mountain resort of Flims, Switzerland, August 5, 2018. (Reuters)

A vintage plane’s crash in Switzerland on Saturday killed all 20 people on board, Grisons cantonal police said on Sunday.

The plane crashed in a basin at 2,450 metres (8,000 feet) above sea level on the west side of the Piz Segnas mountain shortly before 15:00 GMT on Saturday.

Among those killed were 17 people from Switzerland and a three-person family from Austria, police said.

Local media and aviation websites have reported that the plane, which seated 17 passengers along with two pilots and a flight attendant, was fully booked and that no one survived.

“One can ascertain that the aircraft hit the ground nearly vertically at high speed,” Daniel Knecht, who heads the aviation division of the SwissTransportation Safety Investigation Board, said.

Police said those killed were couples from the Swiss cantons of Zurich, Thurgau, Lucerne, Schwyz, Zug and Vaud, along with a three-member family from Austria and three crew members from Thurgau and Zurich.

Police confirmed that the crashed plane was JU-Air’s JU-52 HB-HOT aircraft, which aviation websites said was flying from Locarno near Switzerland’s southern border to the airline’s base in Duebendorf, Zurich.

The cause of the crash, which occurred hours after a family of four was killed when their small plane went down further west in the Alps, is under investigation.

“Yesterday was the worst day in the 36-year history of JU-Air,” the airline’s Chief Executive Kurt Waldmeier said at a news conference in nearby Flims on Sunday. “We have all suffered a very great loss.”

“The JU-Air team is deeply saddened and is thinking of the passengers, the crew and families and friends of the victims,” JU-Air said on its website on Sunday.

The investigation, complicated by the vintage plane’s lack of a “black box” flight recorder, will take several days.

The airline was established in 1982 and offers sightseeing, charter and adventure flights with its three mid-century Junkers Ju-52 aircraft decommissioned by the Swiss Air Force and known affectionately in German as “Auntie Ju” planes.

It said it was suspending flights until further notice.

The airspace above the crash site was closed by the Federal Office for Civil Aviation and access to popular hiking trails in the surrounding area was blocked.