Greek media have described the disaster as a “national tragedy,” while Prime Minister Alexis Tsipras cut short a visit to Bosnia and announced three days of national mourning.

Greek media reported that once the fire broke, people rushed to the sea to save themselves. (Twitter/ @spyros_vj)

The death toll from Monday’s wildfires on the east and west coasts of Greece’s Attica region has risen to 81, according to the Fire Brigade Department on Wednesday. Nearly 200 people have been injured.

The toll increased from 76 to 81 when a person succumbed to his injuries at a hospital while four other bodies were found around the region.

Greek media have described the disaster as a “national tragedy,” while Prime Minister Alexis Tsipras cut short a visit to Bosnia and announced three days of national mourning.

The government has not yet said how many people are still missing from the fires, which broke out on Monday, as firefighters continue to battle blazes in some areas.

Residents and terrified holidaymakers were overtaken by the flames in homes, on foot or in their cars. AFP photographers saw the burnt bodies of people and dogs.

The charred bodies of 26 people, including small children, were discovered at a villa at the seaside resort of Mati, 40 km (25 miles) northeast of Athens, said rescuer Vassilis Andriopoulos.

They were huddled together in small groups, “perhaps families, friends or strangers, entwined in a last attempt to protect themselves as they tried to reach the sea,” he said.

As world leaders including Pope Francis affirmed their solidarity, Athens said 308 engineers would arrive on site by Wednesday to assess the damage.

A woman reacts as she tries to find her dog, following a wildfire at the village of Mati, near Athens, Greece. (Reuters)

But “the problem is what is still hidden under the ashes,” said emergency services Vice President Miltiadis Mylonas.

The death toll could surpass that from the blazes that hit Greece’s southern island of Evia in 2007 in which 77 people perished.

One Belgian was among the victims, said Belgium’s foreign minister Didier Reynders, while Poland said a Polish woman and her son also died.

Some 187 people have been hospitalised, with 82 still being treated on Tuesday evening, including almost a dozen children, most of whom were in “serious condition,” the fire services said.

Athanasia Oktapodi, whose home is surrounded by pine trees, said she first spotted the fire moving down the hill, “and five or 10 minutes later it was in my garden.”

“I ran out like a crazy person, got to the beach and put my head in the water. Then the patrol boats came,” said the 60-year-old. 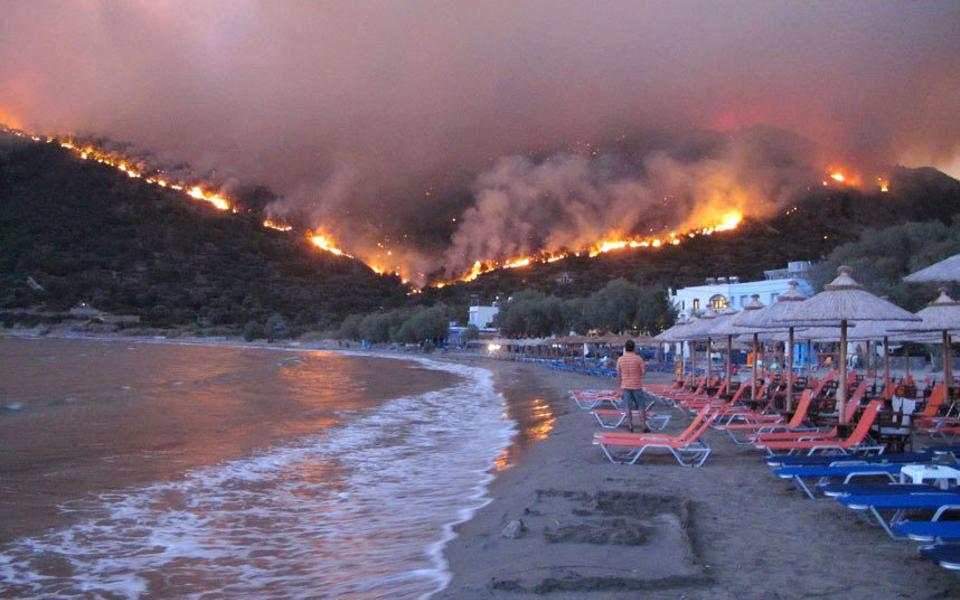 Among the dead are at least 20 children. (Twitter/@_KBlue_)

Victims not only humans

Many animals have been reported dead or missing.

Greek newspaper Lifo reported that volunteers and animal shelters’ helpers have rushed to the affected areas to save any pets and stray animals.

One picture widely shared on Twitter was that of a dog bearing multiple burns on its one side amid many pictures of firefighters saving animals.

A database for those missing has already been created, Greek newspaper iefimerida reported.

There are already 34 people reported missing in the database. However, this is not an official number.

The Greek fire depatrmemnt has urged people to report the missing cases by calling 199.

The whereabouts of two children separated from their grandparents had been a mystery so far, Greek newspaper Kathimerini reported.

Their father, Giannis Filippopoulos, who had been searching in hospitals, police stations and the fire department, saw his two daughters on TV being rescued but has not been able to contact them.

The two girls had been in the care of rescuers ever since their grandparents went missing.

A 13-year-old girl also died falling off a cliff trying to escape the fire.

The two twin girls have still not been found after their father saw them on TV alive. (Youtube/Proto Thema)

Winds of above 100 km per hour (60 mph) in Mati caused a “sudden progression of fire” through the village, said Maliri.

“Mati no longer exists,” said the mayor of nearby Rafina, Evangelos Bournous, adding that more than 1,000 buildings and 300 cars had been damaged.

“I saw the flames outside the window of our hotel. I thought it would explode,” said Alina Marzin, a 20-year-old German tourist who had been staying at the Capo Verde hotel in Mati on Monday evening with her brother and their parents.

At least six people died trying to escape the flames into the sea. Some 715 people were evacuated by boats to Rafina, the government said.

“People are shocked, lost. Some of them have lost everything: children, parents, homes,” said Red Cross spokeswoman Georgia Trisbioti.

European Commission chief Jean-Claude Juncker tweeted the EU “will spare no effort to help Greece and the Greek people,” while Pope Francis spoke of his “deep sadness,” sentiments echoed by EU and NATO leaders.

Greek media are reporting that the people’s response to donate blood and goods has been unprecedented. Hospitals stayed open at night on Tuesday, while people in Athens and other Greek cities made long queues to donate blood.

In the meantime, social media contributed to the rescue operations as never before. Hashtag #Prayforgreece was trending on Tuesday while people living nearby took to the platform to inform victims nearby of rescue sites or houses ready to host them.

Interior Minister Panos Skourletis said the priority was to extinguish a fire still burning in Kineta, 50 km from Athens.

Near the town of Marathon, residents fled to safety along the beach, while 600 children were evacuated from holiday camps.

Officials raised the possibility the blazes could have been started deliberately by criminals out to ransack abandoned homes.

“I am really concerned by the parallel outbreak of these fires,” Tsipras said as Supreme Court prosecutors announced they had opened an investigation into the causes of the fire.

Donate for those affected by the fires here and here.

The wildfires come as record temperatures in northern Europe have seen blazes cause widespread damage in recent days.

Sweden, experiencing an unprecedented drought and the highest temperatures in a century, has counted more than 20 fires across the country. 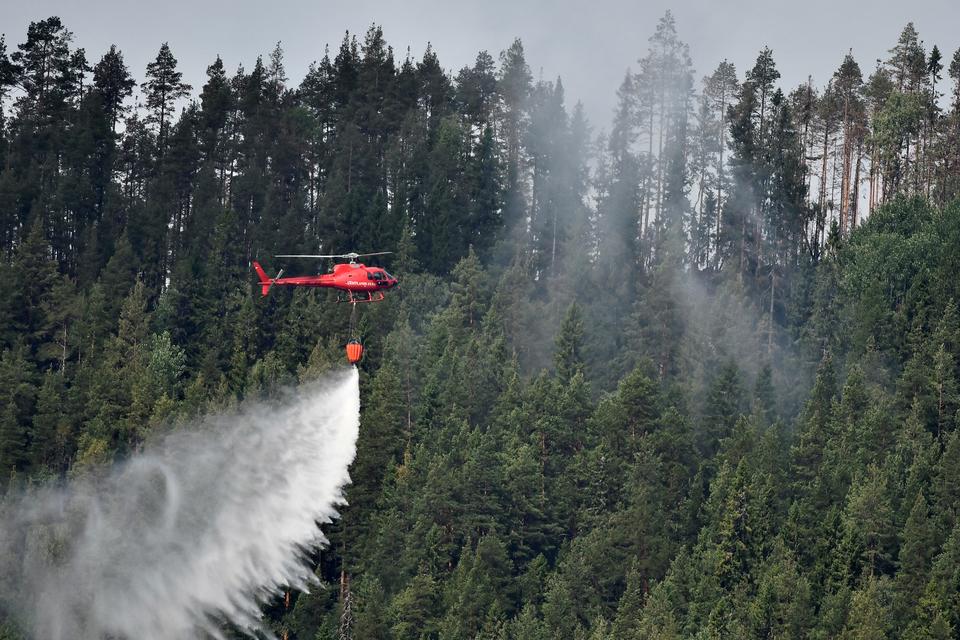 A helicopter drops water on a wildfire next to the village Grotingen in Bracke municipality in central Sweden. (Reuters)

Norway, which experienced its hottest May temperatures on record, has seen several small fires. One firefighter was killed on July 15 trying to contain a blaze.

Fires have raged for five days in Latvia, destroying more than 1,000 hectares in the Baltic state.