Trump faces backlash from Republicans after calling Putin ‘an ally’

US President Donald Trump is facing a wave of criticism over his meeting with Russia’s Vladimir Putin, after he publicly accepted Putin’s word that Russia had not meddled in the 2016 US election. 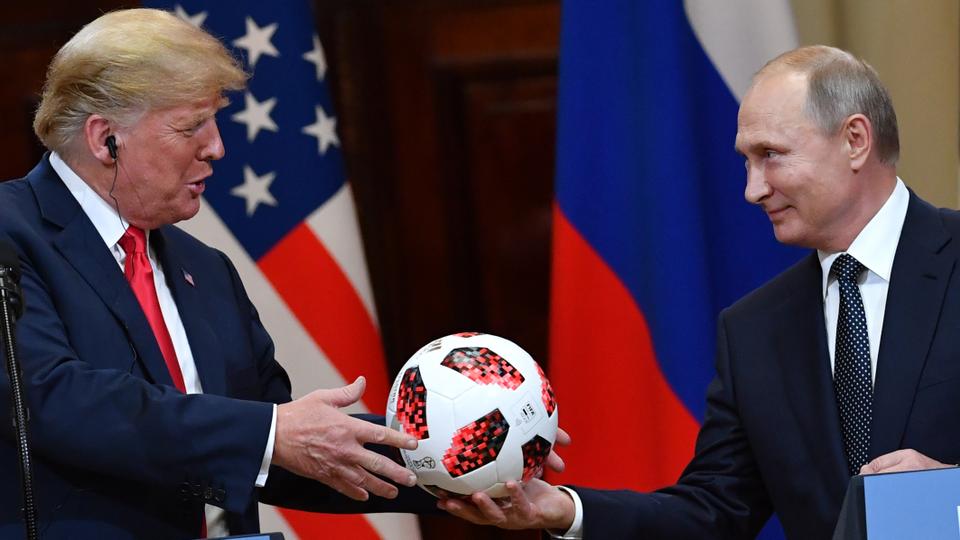 Russia’s President Vladimir Putin (R) offers a ball of the 2018 football World Cup to US President Donald Trump during a joint press conference after a meeting at the Presidential Palace in Helsinki, on July 16, 2018. (AFP)

The eyes of the world were on Helsinki on Monday for the summit between US President Donald Trump and Russian President Vladimir Putin.

But Americans were keeping a watchful eye in particular.

Would Trump address Russian interference in the 2016 US election?

How hard would he be?

And would he take a tough stance on the annexation of Crimea?

His critics said he failed at every turn, dodging and deflecting Russia’s role in the US election, and even going as far as discrediting US intelligence agencies.

The US and Russian leaders came out of their meeting in Helsinki expressing a desire to cooperate on global challenges, after talks on an array of issues from Syria, Ukraine and China to trade tariffs and the size of their nuclear arsenals.

Standing alongside Putin at a joint news conference, Trump said he had “spent a great deal of time talking about” election meddling, without going into detail or explicitly condemning any interference, after 12 Russian agents were indicted in the United States.

Rather, when pressed about the verdict of his own intelligence chiefs, Trump stressed that Putin had delivered a “powerful” denial of any Russian vote meddling and said the US investigation by special counsel Robert Mueller had been a “disaster” for the United States.

Trump again denied any collusion between his campaign and the Kremlin, while Putin insisted, “The Russian state has never interfered and is not planning to interfere in the USA’s internal affairs.”

The US leader, bent on forging a personal bond with the Kremlin chief despite the election allegations, went into the summit blaming the “stupidity” of his predecessors for plunging ties to their present low.

Afterwards, both men were determined to accentuate the positive.

“Our relationship has never been worse than it is now. However, that changed as of about four hours ago. I really believe that,” Trump said, vowing the summit was “only the beginning.”

Putin said, “It is obvious to everyone that bilateral ties are going through a difficult period. However, there are no objective reasons for these difficulties, the current tense atmosphere.”

Praising the “frank and business-like atmosphere” of the summit, the Russian leader said he considered the talks “very successful and useful.”

Many in US agog

The two leaders met one-on-one for more than two hours in the Finnish capital for the historic summit, with just their interpreters present, before they were joined by their national security teams.

Many in Washington were agog at Trump’s decision to sit alone with Putin, worried about what he might bargain away to the former KGB spymaster, after previously cosying up to the autocratic leaders of China and North Korea.

Indeed, some domestic critics wanted the Helsinki summit called off entirely, after the 12 Russians were indicted by Mueller under a long-running probe into Moscow’s alleged hacking of Democratic emails in a bid to drive Trump to victory.

But Trump, convinced his unique brand of diplomacy could make inroads with Putin, pressed ahead and looked forward to “having an extraordinary relationship” as the pair sat down to discuss the global hotspots.

Putin, basking in congratulations from Trump and other world leaders for the successful staging of the World Cup in Russia, said, “The time has come to talk in a substantive way about our relations and problem areas of the world.”

Trump added, “Frankly, we have not been getting along for the last number of years. And I really think the world wants to see us get along. We are the two great nuclear powers.”

‘Trump in the pocket of Putin’

The US intelligence judgment that Russia meddled in the 2016 election is “clear,” Director of National Intelligence Dan Coats said on Monday after Trump refused to endorse his conclusions.

“We have been clear in our assessments of Russian meddling in the 2016 election and their ongoing, pervasive efforts to undermine our democracy,” Coats said in a statement.

Despite Trump’s stance, Coats said the US intelligence community “will continue to provide unvarnished and objective intelligence in support of our national security.”

“Missed opportunity by President Trump to firmly hold Russia accountable for 2016 meddling and deliver a strong warning regarding future elections. This answer by President Trump will be seen by Russia as a sign of weakness and create far more problems than it solves,” Graham said on Twitter.

Arizona Senator Jeff Flake, a frequent Trump critic, said, “I never thought I would see the day when our American President would stand on the stage with the Russian President and place blame on the United States for Russian aggression. This is shameful.”

“Donald Trump’s press conference performance in Helsinki rises to and exceeds the threshold of ‘high crimes & misdemeanors.’ It was nothing short of treasonous,” Brennan said.

“Not only were Trump’s comments imbecilic, he is wholly in the pocket of Putin. Republican Patriots: Where are you???”

Trump began the day by firing a Twitter broadside at his domestic opponents, blaming the diplomatic chill on the investigation into alleged Russian election meddling.

“Our relationship with Russia has NEVER been worse thanks to many years of US foolishness and stupidity and now, the Rigged Witch Hunt!” Trump tweeted.

Trump’s US opponents tried, in turn, to gain traction for the sarcastic hashtag lampooning his reluctance to criticise the Kremlin: #BAF (Blame America First).

After a stormy NATO summit in Brussels last week, Trump was accused by critics of prioritising his ties to Putin over the transatlantic alliance.

But over breakfast with Finland’s President Sauli Niinisto, he insisted NATO “has never been stronger” and “never been more together” thanks to his insistence on all allies paying their fair share.

In a weekend interview with CBS News, Trump admitted that Russia remains a foe, but he put Moscow on par with China and the European Union as economic and diplomatic rivals.

Yet after the bad-tempered NATO summit and a contentious trip by Trump to Britain, anxious European leaders will have been relieved if not much came out of the Helsinki meeting.

Those leaders are already fuming over Trump’s imposition of trade tariffs on various countries, including Russia.

Turning the tables, European Union President Donald Tusk said Trump was guilty of “spreading fake news” with his remark about foes, and warned that the trade tensions could spiral into violent “conflict and chaos.”

“Europe and China, America and Russia, today in Beijing and in Helsinki, are jointly responsible for improving the world order, not for destroying it,” he tweeted.

“I hope this message reaches Helsinki.” 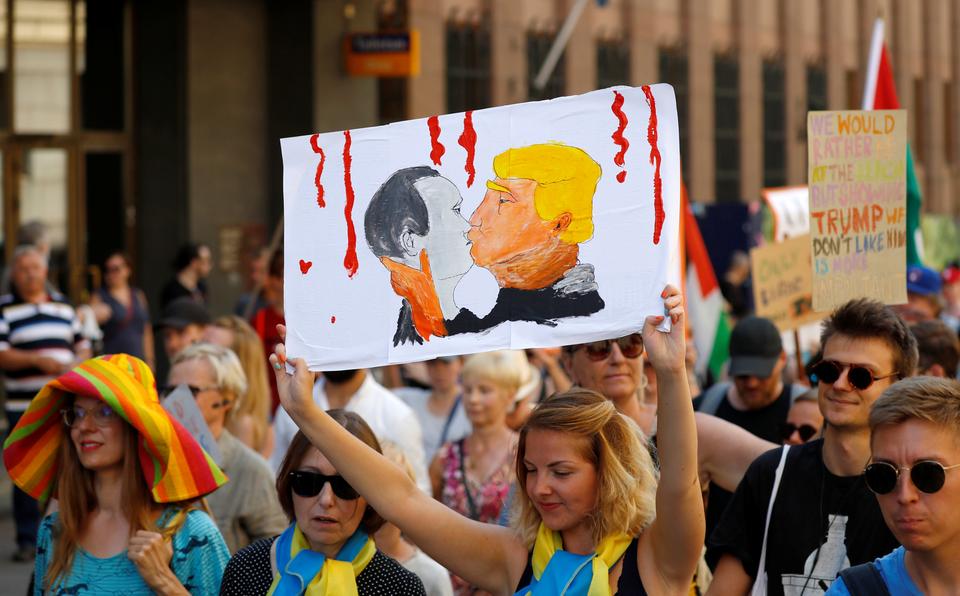 ‘Warm our hearts not our planet’

Protesters were on the streets of Helsinki to denounce the policies of both Trump and Putin. Greenpeace draped a giant banner down a church tower urging, “Warm our hearts not our planet.”

Trump was also under pressure from Britain to press Putin over the nerve agent poisoning of four people in southern England.

One of the victims, Dawn Sturgess, has died and her 19-year-old son Ewan Hope told the Sunday Mirror newspaper, “We need to get justice for my mum.”

But at the news conference, Trump made no mention of the Novichok incident.

Before the press conference, an apparent protester was escorted out of the hall.

The individual, seated with the American press corps in Helsinki, was holding a sign about nuclear weapons. He identified himself as a reporter from the liberal magazine The Nation.

A US Secret Service agent spoke with the unidentified man, before Finnish security physically escorted him from the room minutes before the two presidents entered to begin their press conference.