EU urges US, China and Russia to prevent trade ‘conflict and chaos’

The EU – the world’s biggest single market with 28 countries and 500 million people – is trying to buttress alliances in the face of the protectionism unleashed by US President Donald Trump’s “America First” administration. 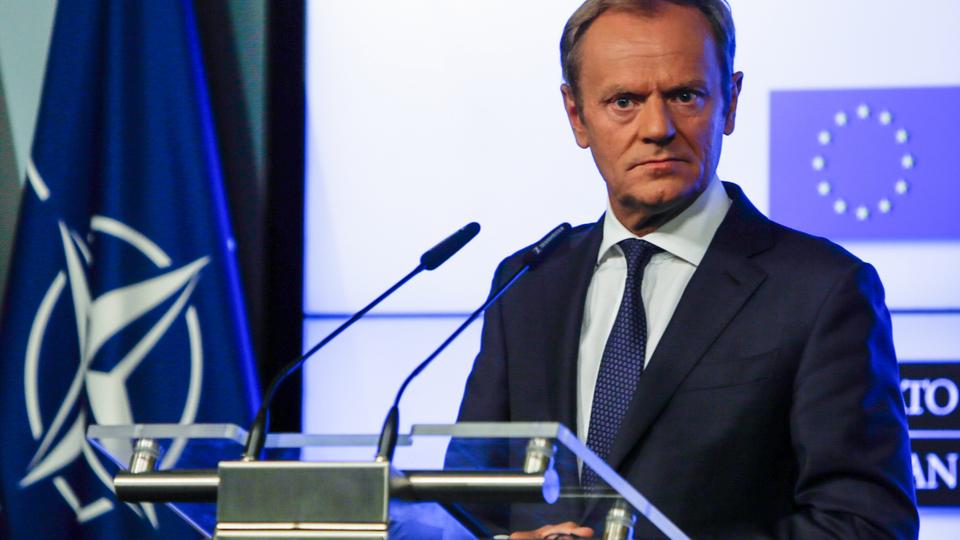 European Council President Donald Tusk holds a joint press conference after signing a joint declaration on the NATO-EU cooperation, in Brussels, on July 10, 2018, on the eve of the NATO summit. (AFP)

The European Union on Monday called on the United States, China and Russia to work together to avoid trade “conflict and chaos” to prevent it spiralling into violent confrontation.

“It is the common duty of Europe and China, but also America and Russia, not to destroy (the global trade order) but to improve it, not to start trade wars which turned into hot conflicts so often in our history,” EU Council President Donald Tusk said in Beijing.

“There is still time to prevent conflict and chaos.”

Tusk spoke after meeting with Chinese Premier Li Keqiang as part of an annual EU-China summit that opened against the backdrop of the growing China-US economic confrontation and wider global trade discord.

The world needed trade reform, rather than confrontation, Tusk.

“This is why I am calling on our Chinese hosts, but also on Presidents Trump and Putin, to jointly start this process from a thorough reform of the WTO.”

“Today we are facing a dilemma, whether to play a tough game, such as tariff wars and conflict in places like Ukraine and Syria, or to look for common solutions based on fair rules,” Tusk said.

Washington imposed 25 percent tariffs on $34 billion of goods in response to complaints that Beijing is hurting American companies by stealing or pressuring enterprises to hand over technology.

It has also applied tariffs on imported steel and aluminium from allies like Canada, Mexico and the European Union.

The 28-country EU bloc has responded with import taxes on $3.25 billion of US goods.

Chinese Premier Li Keqiang said Monday that China and the EU had agreed to take steps to “safeguard free trade” and the global multilateral regulatory system.

He endorsed efforts to update World Trade Organization rules that Washington complains are outdated and cumbersome.
Asked whether China used Monday’s meeting to try to form an alliance with the EU against Washington, Li said the US-Chinese dispute was a bilateral matter for Beijing and Washington to solve.

“Our summit is not directed at any third country,” said Li at a joint news conference.

Chinese leaders have tried without success to recruit German, France and other governments as allies against Washington.