Spokesperson for the Russian foreign ministry says, “Tit-for-tat measures will be taken, as is always the case in such situations.” Greek diplomatic sources allege the Russian envoys were interfering with the deal on the name dispute with Macedonia. 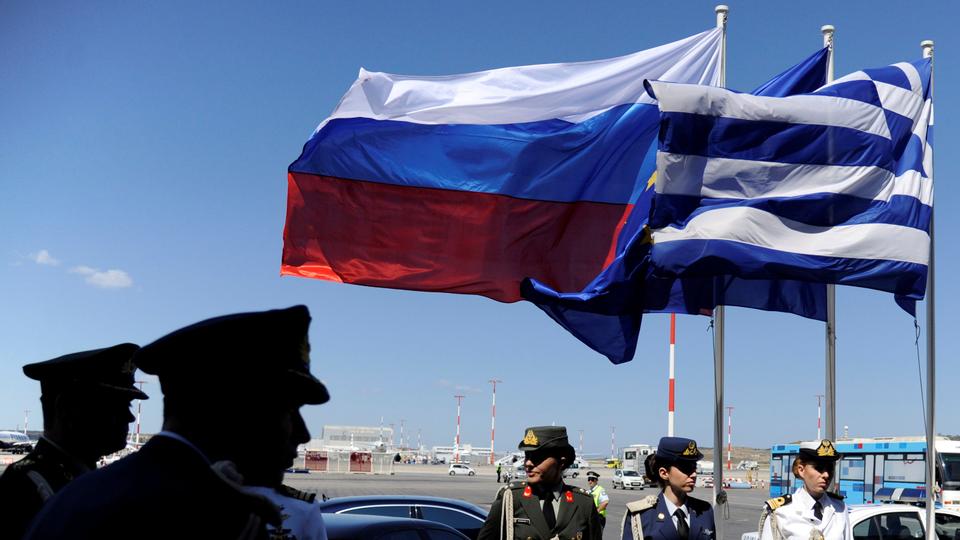 Greek police and army officers stand by Greek, Russian and EU flags as they wait for the arrival of Russian President Vladimir Putin in Athens, Greece airport, May 27, 2016. (Reuters Archive)

Greece has taken “the necessary measures to protect its national interest” after “interference” by Russian officials in the name dispute with the Republic of Macedonia, the government said on Wednesday.

“In this context, measures have been taken,” he added.

Tzanakopoulos did not reveal the “measures” or give further details after Greek Kathimerini newspaper reported Greece was planning to expel two Russian diplomats and ban two other Russian envoys from entering the country.

A source told AFP “there was a problem of interference in the Macedonian dossier,” while adding that Athens’ traditionally good relations with Russia were unchanged.

It said Athens accuses them of having tried to influence the northeastern monastic community of Mount Athos – known for its fierce patriotism – as well as local authorities in the north of the country to launch demonstrations against the agreement with Skopje.

In Moscow, a spokesperson for the Russian foreign ministry told AFP: “Tit-for-tat measures will be taken, as is always the case in such situations.”

However, a Greek government source said Athens “maintains channels of communication” with Moscow and that Greece “has no problems.”

She added that unlike many other EU countries, Greece did not expel any Russian diplomats following the poisoning of an ex-Russian spy in Britain, which London blamed on Moscow.

Greece had informed Russia on July 6 that it planned to expel Russian diplomats from the country for illegal activities connected to rallies against a deal with Macedonia, a Greek diplomatic source told Reuters on Wednesday.

“We had issued warnings to Russian authorities for some time over (the actions of) these specific four diplomats and civilians, and on Friday it was officially raised, giving them a reasonable period of a few days to leave the country,” the source told Reuters.

The allegations concerned involvement in rallies against a deal with Macedonia and attempts to offer money to state officials, the source said.

Athens and Skopje signed an accord last month to resolve the decades-long dispute over the Balkan state’s use of the name Macedonia, which is also the name of a northern Greek province.

Nationalists in both Greece and Macedonia remain opposed to the deal.

The two nations came to an agreement to call the country the Republic of North Macedonia. Approved by the parliament in Skopje, it will next be put to a referendum.

However, Macedonia’s President Gjorge Ivanov has refused to sign the agreement calling it a “criminal act” that violated the constitution.

Macedonian Prime Minister Zoran Zaev has said he will resign if the agreement fails to get support in the promised referendum. “Macedonia has no plan B,” Zaev told 1TV.

Macedonia’s name has led to a dispute with Greece since Macedonia became independent with the breakup of Yugoslavia in the early 1990s. A Greek province is also called Macedonia, and many Greeks consider the name to be a claim to their territory.

Greece has blocked Macedonia from joining the EU or NATO, and required it to enter the United Nations as “The Form