The Capital Gazette have published a Friday edition after a gunman burst into the newspaper’s newsroom and killed five people. 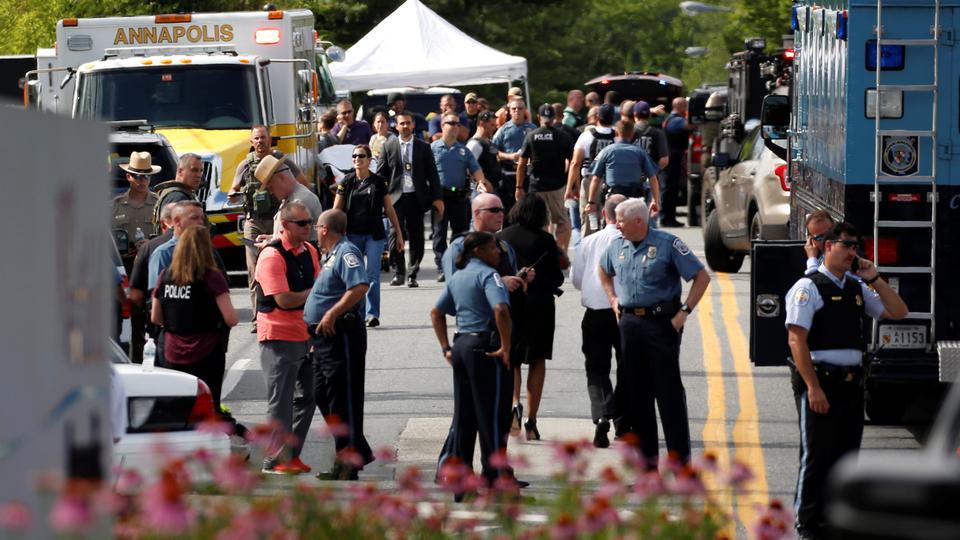 Law enforcement officials survey the scene after a gunman fired through a glass door at the Capital Gazette newspaper and sprayed the newsroom with gunfire, killing at least five people and injuring several others in Annapolis, Maryland, US, June 28, 2018. (Reuters)

One of Maryland’s Annapolis publication reporter said , The Capital, plans to publish a Friday edition, after a man who had a long-running feud with the newspaper blasted his way through its newsroom with a shotgun on Thursday, killing at least five people in one of the deadliest attacks recorded on a US media outlet, authorities said.

I can tell you this: We are putting out a damn paper tomorrow.

The suspect fired through a glass door, looked for victims and then sprayed the newsroom of the Capital Gazette newspaper group in Annapolis with gunfire, police and a witness said.

Wendi Winters, 65, Rebecca Smith, 34, Gerald Fischman, 61, and John McNamara were also killed, he said. Smith was a sales assistant and the others were journalists.

“This was a targeted attack on the Capital Gazette,” Krampf said. “This person was prepared to shoot people. His intent was to cause harm.”

Anne Arundel County police said on Twitter that due to investigative reasons, they have not released the name of the suspect in custody, adding that as of Thursday evening, the suspect has not been booked.

In 2012, Ramos brought a defamation lawsuit against Eric Hartley, formerly a staff writer and columnist with publication The Capital, and Thomas Marquardt, then editor and publisher of The Capital, according to a court filing.

In 2015, Maryland’s second-highest court upheld a ruling in favor of the Capital Gazette and a former reporter who were accused by Ramos of defamation.

According to a legal document, the article contended that Ramos had harassed a woman on Facebook and that he had pleaded guilty to criminal harassment. The court agreed that the contents of the article were accurate and based on public records, the document showed.

Ramos said on Twitter that he had set up an account to defend himself, and wrote in his bio that he was suing people in Anne Arundel County and “making corpses of corrupt careers and corporate entities.” 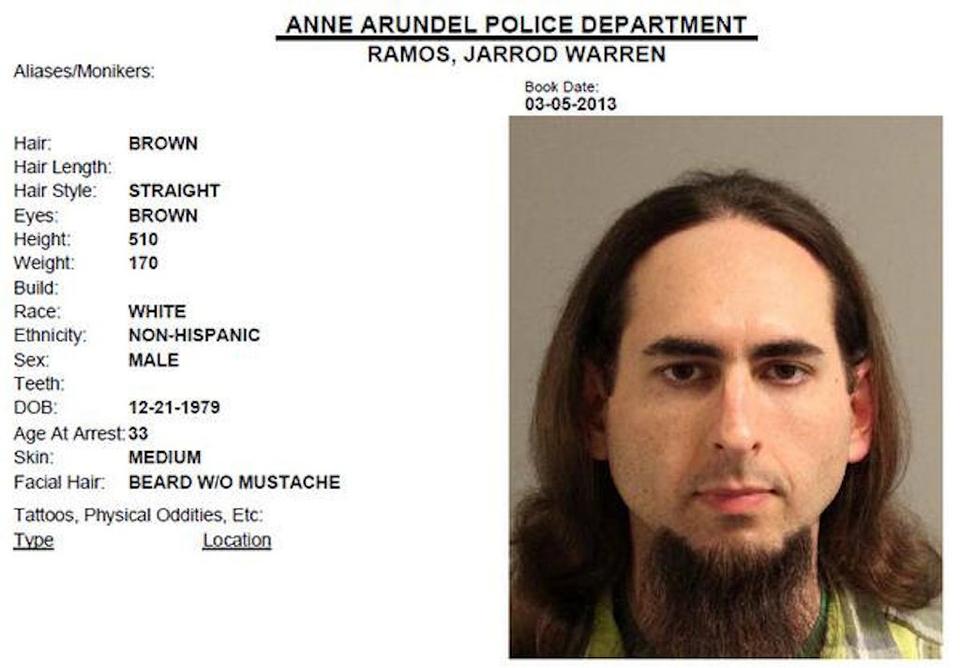 Phil Davis, a Capital Gazette crime reporter, said he was hiding under his desk along with other newspaper employees when the shooter stopped firing, the Capital Gazette reported on its website.

The newsroom looked “like a war zone,” he told the Baltimore Sun, adding, “I don’t know why he stopped.”

“As much as I’m going to try to articulate how traumatizing it is to be hiding under your desk, you don’t know until you’re there and you feel helpless,” Davis said.

Police officers in the Maryland capital of Annapolis responded within a minute to a 911 call about a shooting in progress and apprehended the suspect who was hiding under a desk, authorities said.

Police are treating the shooting as a local incident, with no links to terrorism, a law enforcement source said. Krampf did not say why the gunman may have targeted the newspaper or its employees.

When police found the suspect, his weapon was on the ground and “not in his immediate proximity,” Steve Schuh, Anne Arundel county executive, told cable news station CNN.

Police said they recovered what they thought might have been an explosive device but Krampf later said the suspect had smoke grenades. Investigators were in the process of securing his Maryland residence and obtaining search warrants, he said.

The suspect appeared to have damaged his fingertips to try to avoid detection and was refusing to cooperate with law enforcement, Baltimore TV station WJZ and other local media reported. Krampf did not comment on those reports.

Capital Gazette runs multiple newspapers out of its Annapolis office and the group includes one of the oldest newspapers in the United States, The Gazette, which traces its origins back to 1727.

The company, part of the Tronc Inc media group, publishes newspapers in and around Annapolis, home of the US Naval Academy. The papers have thrived by focusing on local news in the shadows of two much larger competitors, the Washington Post and Baltimore Sun. 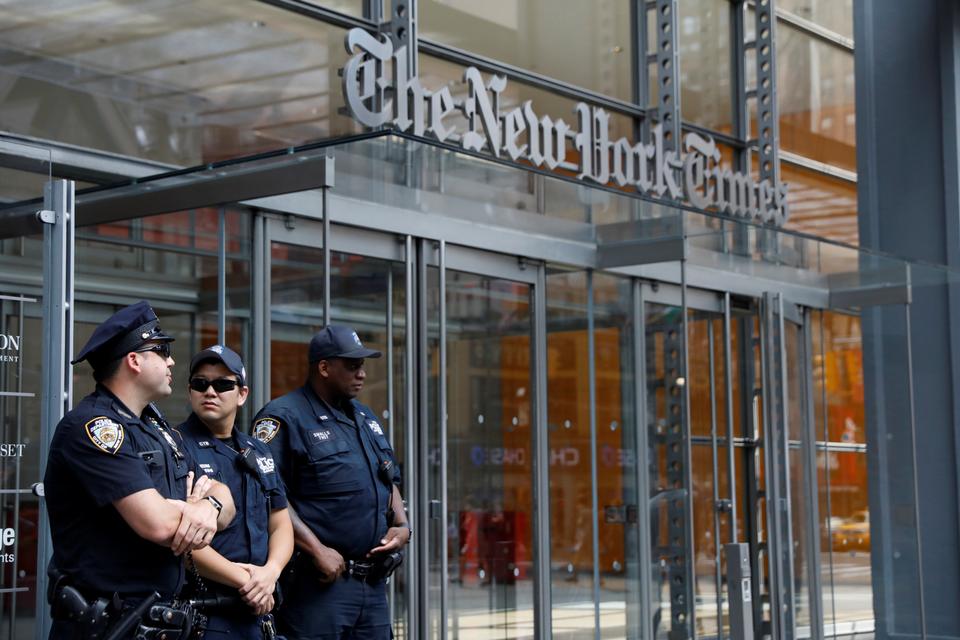 Fears for other attacks

Law enforcement in Baltimore and New York City deployed extra officers to the offices of the New York Times and other major media outlets as a precaution, authorities said.

The shooting drew the attention of media groups, including Reporters Without Borders, which said it was deeply disturbed by the events in Annapolis.

White House spokeswoman Lindsay Walters said that US President Donald Trump had been briefed on the shooting.

“My thoughts and prayers are with the victims and their families. Thank you to all of the First Responders who are currently on the scene,” Trump said in a tweet.

White House Press Secretary Sarah Sanders said on Twitter, “A violent attack on innocent journalists doing their job is an attack on every American.”

Jimmy DeButts, an editor at the Capital Gazette, tweeted that he was devastated, heartbroken and numb.

“I’m in no position to speak, just know @capgaznews reporters & editors give all they have every day. There are no 40 hour weeks, no big paydays – just a passion for telling stories from our community,” he wrote.

A local journalist has set up a GoFundMe page to support the victims of the shooting.