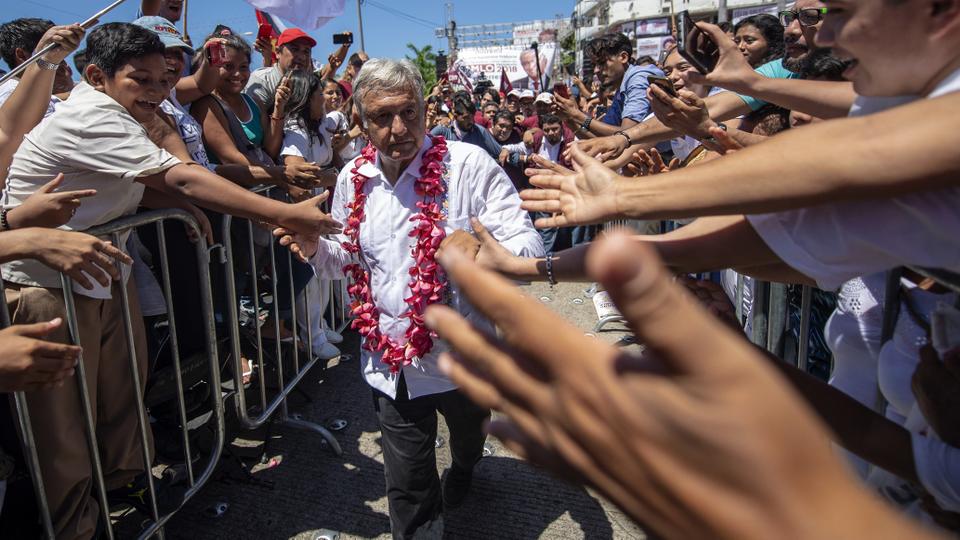 Mexico’s presidential campaign drew to a close with a fiesta of rallies on Wednesday, as establishment candidates made last-ditch pleas for voters to reject the radical break with the past promised by leftist front-runner Andres Manuel Lopez Obrador.

All four candidates were holding a series of huge rallies around the country — none more festive than Lopez Obrador’s in Mexico City’s Azteca Stadium, where an A-list of Mexican musicians was lined up to perform in the evening before his speech.

Opinion polls have given him a double-digit lead for months. Two polls released on Wednesday — the final day for campaigning and polls — put his advantage at more than 20 percentage points over his top rivals.

Sick of endemic corruption and horrific violence fuelled by the country’s powerful drug cartels, many Mexicans are keen for any alternative to the two parties that have governed for nearly a century: the ruling Institutional Revolutionary Party (PRI) and the conservative National Action Party (PAN).

“The policies we’ve been applying for the past 30 years haven’t worked. We haven’t even had economic growth,” Lopez Obrador told thousands of cheering supporters at his first of three rallies, in the southern state of Chiapas.

“What’s grown is corruption, poverty, crime and violence. That’s why we’re going to send their policies to the dustbin of history.”

Judging by the opinion polls, the PRI and PAN candidates — ex-finance minister Jose Antonio Meade and former speaker of Congress Ricardo Anaya, respectively — are having a hard time selling that message.

Lopez Obrador’s coalition, led by his party, Morena, is within striking distance of a Congressional majority and six governorships.

That would be a major realignment in Mexican politics and a coup for a party only launched six years ago, originally as a grassroots movement to support the three-time presidential candidate’s 2012 campaign.

Lopez Obrador, 64, has clashed with Mexico’s business community, with some warning he would pursue Venezuela-style socialist policies that could wreck Latin America’s second-largest economy.

Seeking to soothe the markets, he has back pedalled on some of his most controversial proposals.

Instead of reversing outgoing President Enrique Pena Nieto’s landmark energy reform, he now proposes simply reviewing the existing contracts privatising the oil sector; he softened his stance on a new Mexico City airport he initially wanted to scrap; and he has remained vague on a proposed amnesty for criminals, his idea to deal with violence that left a record 25,000 murders last year.

Many of Mexico’s 88 million voters are not quite sure what Lopez Obrador represents, other than something new. But in these elections, that may be enough.

“Who cares if they say he’s going to do a bad job running the country? These other politicians have experience, they speak who knows how many languages, and look where that got us. They robbed us, they’re corrupt,” said Teresa Rivera, 68, a maid who had been standing in line since 5:00 am to see Lopez Obrador’s evening rally.

Mexico’s next president faces a laundry list of challenges, including crime, corruption, a lacklustre economy and a complicated relationship with the United States under President Donald Trump, whose anti-trade and anti-immigration policies have turned diplomacy with Mexico’s largest trading partner into a minefield.

Lopez Obrador has vowed to “put (Trump) in his place.”

Ironically, some commentators have drawn parallels between the two: both are free-trade skeptics with populist tendencies who have fired up a disgruntled base with anti-establishment campaigns.

But unlike the American billionaire, Lopez Obrador has built an image as an ascetic everyman.

“I’m going to govern by example, with austerity,” he said in a widely circulated campaign video.

“I’ll halve the presidential salary and continue living in my own house.”