The centre-right Slovenian Democratic Party (SDS) won 25 seats in Sunday’s election, falling well short of a majority. Most of the other eight parties have refused to join SDS to form a coalition due to its hardline anti-immigration stance. 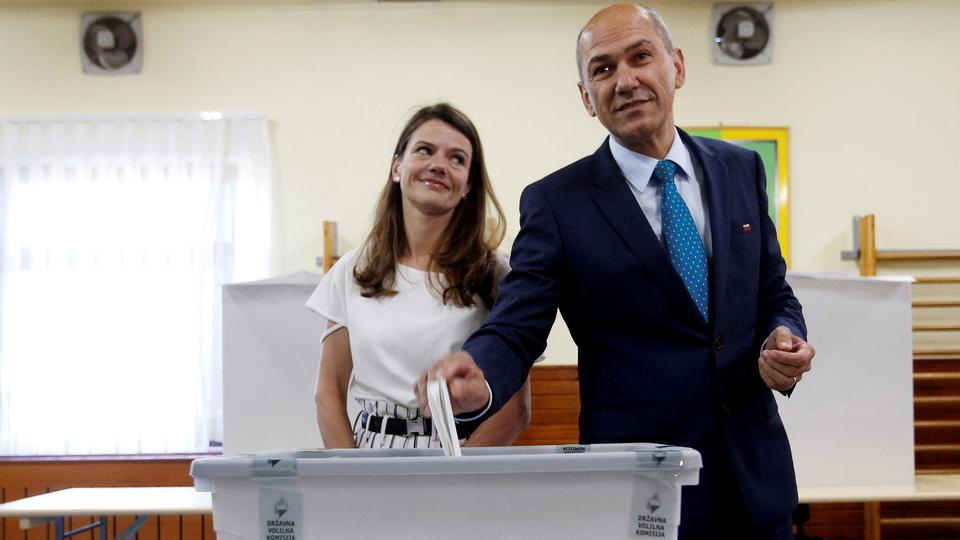 Janez Jansa, leader of the Slovenian Democratic Party (SDS), and his wife Urska cast their votes at a polling station during the general election in Velenje, Slovenia, on June 3, 2018. (Reuters)

Slovenia looked set for a period of political uncertainty on Monday after an inconclusive parliamentary election in which the anti-immigrant Slovenian Democratic Party (SDS) won the most seats but fell well short of a majority.

The lack of a clear outcome from Sunday’s election dented Slovenian bond prices and the country’s main business forum urged speedy coalition talks to avert any damage to the booming economy.

The president has previously said he would nominate the leader of the biggest party as prime minister in the next couple of weeks, but Jansa may struggle to win sufficient parliamentary support to lead the next government.

The centre-right SDS, which has the support of neighbouring Hungary’s nationalist Prime Minister Viktor Orban, won 25 of the 90 parliamentary seats, but most of the other eight parties have said they will not join a coalition with the SDS.

“We hope that a broad coalition can be formed which would include centre-right and centre-left parties and would have a programme that would enable further economic growth,” said the head of the Chamber of Commerce and Industry, Sonja Smuc.

“Political instability or a weak government without a clear development programme could mean troubles for the economy and lower economic growth,” she told Reuters.

Jansa, a two-time former prime minister, said on Sunday the SDS would invite all other parliamentary parties to coalition talks.

Parliament must hold its first session within 20 days and the president then has 30 days to nominate a candidate for prime minister.

Jansa, who led the government in 2004-08 and in 2012-13, has said he wants to abolish migrant quotas, strengthen the security forces, cut taxes and speed up privatisation.

Hungary’s Orban has also strongly opposed the European Commission’s attempts to impose quotas on all EU member states to take in migrants following the influx of large numbers of mostly Muslim refugees since 2015.

Only the conservative New Slovenia and right-wing Slovenian Nationalist Party have indicated a willingness to join a coalition with the SDS, but together the three would hold only 36 parliamentary seats.

The second biggest party in the new parliament is the centre-left List of Marjan Sarec with 13 seats. Sarec said on Sunday he also expected to get a chance to form a government.

“A wide centre-left government looks like the baseline scenario, with risks of a new snap election not negligible,” said Alen Kovac, an analyst of Erste Group Research.

The prospect of political instability nudged the yield on Slovenia’s 10-year benchmark bond up to 1.192 percent by 1114 GMT, up from 1.149 on Friday, according to Reuters data.

“Since it is clear that it will be difficult to form a government coalition and later also hard to keep it together the yield could rise a bit further,” said Saso Stanovnik, chief analyst of investment firm Alta Invest.

“However, the yield in the future will mostly depend upon the general conditions in the European Union, which have a direct impact on Slovenia’s exports, and the actions of the European Central Bank,” he added.

Exports to other EU states are the main driver of Slovenia’s economy, which the government expects to expand by 5.1 percent this year. It grew by 5 percent in 2017.