North Korea threatens to cancel historic summit with US

North Korea cancelled a high-level meeting Wednesday with South Korea and threatened also to call off a historic summit planned later this month with the United States due to ongoing military exercises between the South and the US. 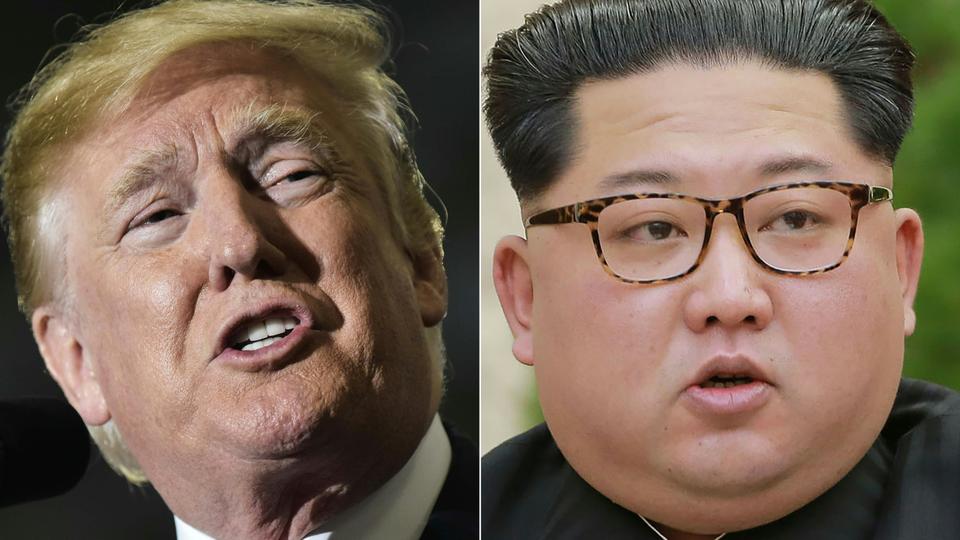 This combination of file pictures created on May 10, 2018 shows US President Donald Trump during a rally at Total Sports Park in Washington, Michigan on April 28, 2018, and a photo released from North Korea’s official Korean Central News Agency (KCNA) on April 21, 2018 of North Korean leader Kim Jong-un delivering a speech while attending the Third Plenary Meeting of the Seventh Central Committee of the Workers’ Party of Korea in Pyongyang. (AFP)

North Korea on Wednesday called into question a much-anticipated and unprecedented summit between its leader Kim Jong-un and US President Donald Trump, the South’s Yonhap news agency reported.

Pyongyang also cancelled high-level talks due Wednesday with Seoul over the Max Thunder joint military exercises between the US and the South, Seoul said.

The US will “have to undertake careful deliberations about the fate of the planned North Korea-US summit in light of this provocative military ruckus,”Yonhap quoted the North’s official news agency KCNA as saying.

The drills between the two allies’ air forces were a rehearsal for invasion and a provocation at a time when inter-Korean relations were warming, it cited KCNA as adding.

The language used is a sudden and dramatic return to the rhetoric of the past from Pyongyang, which has long argued that it needs nuclear weapons to defend itself against the US.

Hostilities in the 1950-53 Korean War stopped with a ceasefire, leaving the two halves of the peninsula divided by the Demilitarised Zone (DMZ) and still technically at war.

At a dramatic summit last month in Panmunjom, the truce village in the DMZ, Kim and the South’s President Moon Jae-in pledged to pursue a peace treaty to formally end the conflict and reaffirmed their commitment to denuclearising the Korean peninsula.

But the phrase is open to interpretation on both sides and the North has spent decades developing its atomic arsenal, culminating last year in its sixth nuclear test – by far its biggest to date – and the launch of missiles capable of reaching the US.

The drive has seen it subjected to multiple rounds of UN Security Council resolutions, while Trump threatened it with “fire and fury” as he and Kim traded personal insults and threats of war last year.

Then relations underwent a sudden and dramatic turnaround as Moon seized the opportunity presented by February’s Winter Olympics in the South to broker talks between Washington and Seoul.

In a dizzying array of diplomatic steps, the biggest so far was his meeting with Kim in the DMZ last month. The Trump-Kim summit is due in Singapore on June 12, with Washington demanding the North give up its weapons in a complete, verifiable and irreversible way.

High-level talks were meant to take place in the DMZ on Wednesday to discuss follow-up measures to the Panmunjom summit.

But in a statement, Seoul’s unification ministry, which handles relations with the North, said it had received a message “in the name of chief delegate Ri Son-gwon that they were postponing the high-level talks indefinitely, citing the Max Thunder drill.”