Hawaii’s erupting Kilauea volcano threatened highways after two more fissures opened in the past 24 hours, bringing the total to 19. 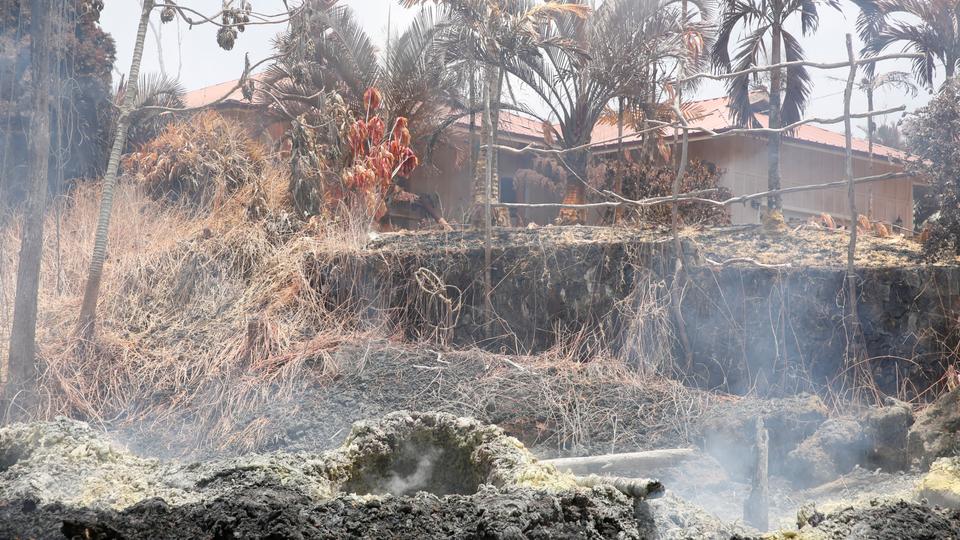 Volcanic gases rise from a fissure in the Leilani Estates subdivision during ongoing eruptions of the Kilauea Volcano in Hawaii, US on May 14, 2018 (Reuters)

Lava flowing from giant rips in the earth on the flank of Hawaii’s erupting Kilauea volcano threatened highways on Monday, raising the possibility officials may order thousands more people to evacuate before escape routes are cut off.

Lava from a huge new fissure tore through farmland towards a coastal dirt road that is one of the last exit routes for some 2,000 residents in the southeast area of Hawaii’s Big Island.

More lava-belching cracks are expected to open among homes and countryside some 25 miles (40 km) east of Kilauea’s smoking summit, possibly blocking one of the last exit routes, Highway 132.

Fountains of magma spouted “lava bombs” more than 30 metres into the air as the molten rock traveled east-southeast towards the coastal road – Highway 137 – the Hawaiian Volcano Observatory said.

Mass evacuations would be triggered if either highway is hit by lava, said Hawaii National Guard spokesman Jeff Hickman.

“There’s a lot of worst-case scenarios and roads getting blocked is one of them,” said Hickman, standing on Highway 137, in the potential path of the lava flow, some three kilometres away.

Dozens of homes have been destroyed since eruptions began 10 days ago and officials have ordered the evacuations of nearly 2,000 residents in the lower Puna district of the Big Island, home to around 187,000 people.

The American Red Cross said 500 people sought refuge in its shelters on Sunday night because of worsening volcanic activity.

Two more fissures opened in the past 24 hours, bringing the total to 19.

The Hawaii Fire Department issued a “condition red” alert on Monday because fissures in the southeast area of the Lanipuna Gardens area were issuing high levels of sulfur dioxide.

“Condition RED means immediate danger to health so take action to limit further exposure. Severe conditions may exist such as choking and inability to breathe,” the department said in the alert.

While residents deal with noxious gas and lava on the ground, the US Geological Survey is concerned that pent-up steam could cause a violent explosive eruption at the volcano crater, launching a 6,100-metre plume that could spread debris over 19 kilometres.

Scientists had expected such explosions by the middle of this month as Kilauea’s lava lake fell below the water table. The possibility exists, however, that water may not be entering the crater, as feared, and gas and steam may be safely venting, scientists said.

“So far those explosions have not occurred and I think the key here is that the vent system is an open one, therefore pressure is not being built or developed down at the top of the lava column,” Brantley told a conference call.

Officials say the pace of bookings for hotels and tour activities on the Big Island of Hawaii are down about 50 percent compared with previous years as the erupting volcano is spewing lava.

The Big Island tourism board estimates $5 million worth of cancellations from May through July. There was “an immediate impact” after the Kilauea volcano first erupted.

Tourism on the island brought in $2.5 billion in revenue last year. Board executive director Ross Birch says this is the “first leak we’re seeing out of the bucket.”

Most of the Hawaii Volcanoes National Park remains closed to visitors due to ongoing seismic activity and the possibility of an explosion at the summit.