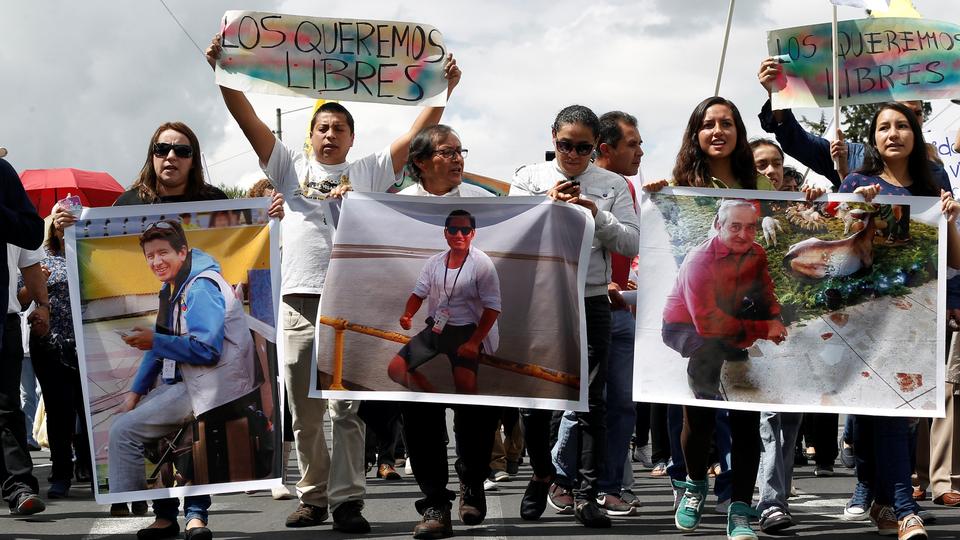 Relatives and friends hold pictures of Ecuadorean photojournalist Paul Rivas (L), journalist Javier Ortega (C) and their driver Efrain Segarra in Quito, Ecuador on April 1, 2018. The sign at the back reads: “We want them free.” (Reuters)

Ecuador’s President Lenin Moreno on Friday confirmed the deaths of three members of a journalist team kidnapped by renegade Colombian rebels – and quickly launched a retaliatory military operation in the area where they were snatched.

“Sadly, we have information confirming the murder of our fellow countrymen,” Moreno told reporters in Quito, two hours after the expiry of a 12-hour deadline he had given captors to prove the trio was still alive – or else face a “forceful” response.

“We have resumed … military and police operations in the strip of land by the border where they were previously suspended, and I am immediately sending in a deployment of elite units from the army and the police,” Moreno said.

Colombia said it’s ready to support the Ecuadorian government in the situation.

“I’ve been in constant contact with Ecuadorian President Lenin Moreno. I spoke with him again yesterday. I reiterated our solidarity as well as our readiness to support the Ecuadorian government in this situation,” Colombian President Juan Manuel Santos said.

“Colombia has a lot of experience in the fight against these kinds of criminal organisations, and we have made available to Ecuador all of our capabilities.”

The ultimatum was issued after Moreno’s government received photos from a Colombian TV station suggesting the three men, all Ecuadorans, were dead.

The three – reporter Javier Ortega, 32, photographer Paul Rivas, 45, and their driver Efrain Segarra, 60 – all worked for the influential El Comercio newspaper and were following a story on violence in the border area when they were kidnapped on March 26 by rogue forces affiliated with Colombia’s recently-disbanded FARC rebels.

More than 1,000 FARC fighters refused to demobilise under the accord with Colombia’s President Juan Manuel Santos and continued drug trafficking across the nation.

Those operating in Colombia’s southern jungles have attacked Ecuadorean security forces along the border.

Moreno announced last month that he was sending 12,000 soldiers and police to combat drug gangs and boost security along the border.

That represents about 10 percent of the small nation’s police officers and troops.

The FARC, which battled for more than a half century, attacked military targets and civilian towns, but generally allowed journalists to work freely, unless they went against the rebels’ interests.

Ecuador is a major transit zone for Colombian-produced cocaine, with small boats carrying the drugs from the South American nation’s Pacific shore to Central America and on to the United States.