Venezuela’s Supreme Court in exile on Monday asked their country’s armed forces and Interpol to detain President Nicolás Maduro, saying there was probable cause to put him on trial for corruption and other crimes.

Speaking from Colombia’s capital, the court — which isn’t considered legitimate by the administration in Venezuela — said Maduro had overseen a web of corruption that allowed Brazilian construction firm Odebrecht to defraud the country to the tune of $2.5 billion.

“This criminal organization scheme needs to be investigated not just in Venezuela but internationally,” the court said.

The ruling comes after Venezuela’s former prosecutor general, Luisa Ortega, presented documents last week outlining Maduro’s role in what she says is widespread and systemic fraud. In particular, she said Maduro received $35 million in illicit campaign contributions from Odebrecht in exchange for giving them lucrative construction projects — many of which were never started or are incomplete.

The court asked Interpol to arrest Maduro if he leaves the country, saying it was the only way to ensure justice could be served.

The Venezuelan “state has been kidnapped, which has turned it into a failed state,” said exiled Supreme Court President Miguel Ángel Martín.

That the people who call themselves Venezuela’s “legitimate” Supreme Court are forced to meet in neighboring Colombia speaks to Venezuela’s ongoing power struggle.

In July 2017, Venezuela’s opposition-controlled congress appointed 33 judges to the high court. Before they could be seated, however, Maduro accused the magistrates of treason and said they could face 30-year jail sentences.

Two of the judges turned in their resignations, one is under house arrest in Venezuela and the remaining 30 fled across the Americas to Chile, Panama, Colombia and the United States.

While the court’s rulings will be shrugged off in Venezuela, the exiled judges hope foreign governments will recognize their authority. The court said it will be sharing its Monday ruling with the United Nations, the Organization of American States and at the Summit of the Americas, a gathering of the leaders of the Western Hemisphere set to take place this weekend in Peru. 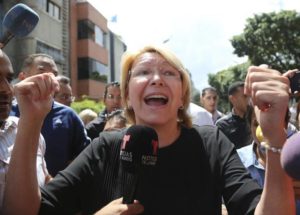