Protests against his arrest on charges of charges of “rebellion” and “sedition” broke out in Catalonia barely hours after his arrest in Germany, where he is expected to appear in court on Monday. 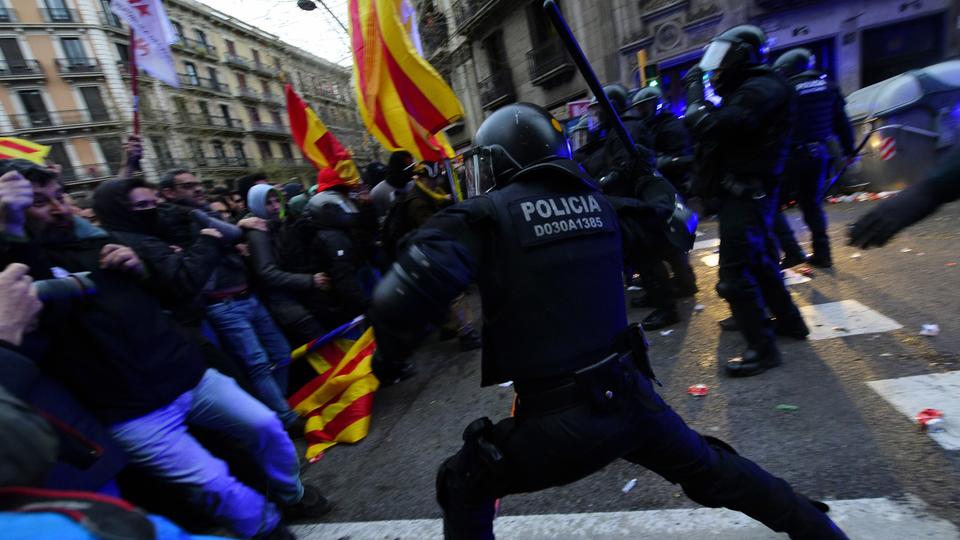 Protesters clash with riot police blocking the road leading to the central government offices during a demonstration in Barcelona on March 25, 2018 after Catalonia’s former president was arrested by German police. (AFP)

Carles Puigdemont, the fugitive ex-leader of Catalonia and ardent separatist, was detained Sunday by German police on an international warrant as he tried to enter the country from Denmark.

Puigdemont’s capture, aided by Spanish intelligence services, sparked protests of tens of thousands demonstrators in Catalonia’s main city of Barcelona and other towns in the wealthy northeastern corner of Spain. One group clashed with riot police.

He is expected to appear in court on Monday.

Spain was plunged into its worst political crisis in three decades when Puigdemont’s government flouted a court ban and held an ad-hoc referendum on independence for the northeastern region in October.

The Catalan parliament’s subsequent declaration of independence received no international recognition and provoked a takeover of the regional government by Spanish authorities that they say won’t be lifted until a new government that respects Spain’s Constitution is in place.

Spain’s state prosecutor office said it was in contact with its German counterparts to carry out its request to extradite Puigdemont to Spain, where he faces charges including rebellion that could put him in prison for up to 30 years.

In Barcelona, riot police shoved and struck protesters with batons to keep an angry crowd from advancing on the office of the Spanish government’s representative. Police vans showed stains of yellow paint reportedly thrown by protestors.

German highway police stopped Puigdemont on Sunday morning near the A7 highway that leads into Germany, police in the northern state of Schleswig-Holstein said.

German news agency dpa said that Puigdemont was taken to a prison in the northern town of Neumünster. Dpa photos showed a van with tinted windows believed to be carrying Puigdemont as it arrived at the prison. Video footage also showed the same van leaving a police station in Schuby near the A7 highway.

State prosecutors in Schleswig said that Puigdemont will appear in court Monday in the northern German town to confirm his identity. It said in a statement that “the question of whether Mr. Puigdemont has to be taken into extradition custody will then have to be determined by the higher regional court in Schleswig.” 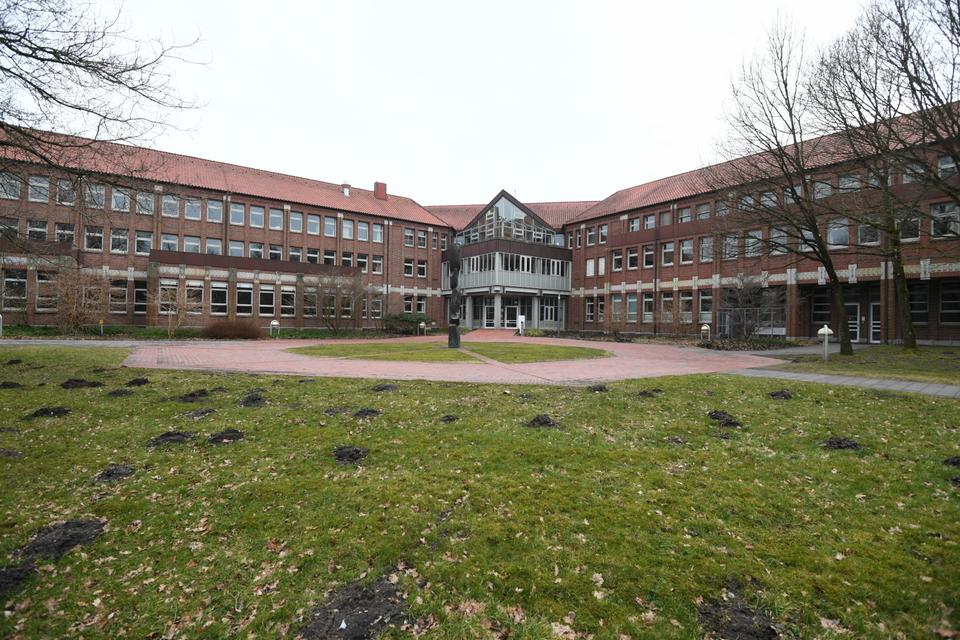 This picture taken on March 25, 2018 shows a general view of the building of the Higher Administrative Court in Schleswig, northern Germany, where the decision on a possible application for asylum concerning Catalonia’s former president Carles Puigdemont will be taken. (AFP)

German state prosecutor Ralph Doepper told RTL Television that Puigdemont has been “provisionally detained, he has not been arrested.”

“We are now examining the further procedure, i.e. tomorrow we will decide whether we will file a provisional application for detention with the competent district court, which could lead to extradition detention later on,” Doepper said.

A Spanish police official told The Associated Press under customary condition of anonymity that Spain’s National Center for Intelligence and police agents from its international cooperation division helped German police to locate Puigdemont.

A Spanish Supreme Court judge reactivated an international arrest warrant for Puigdemont on Friday when he was visiting Finland. Spain has also issued five warrants for other separatist who fled the country.

Albert Rivera, the Catalan president of the pro-Spain Citizens party, celebrated the capture of Carles Puigdemont, who he accused of trying to carry out a “coup.”

Rivera wrote on his Twitter account: “Trying to destroy a European democracy, ignoring the laws of democracy, shattering our harmonious co-existence and embezzling public funds to do so can’t go unpunished. Justice has done its job.”

But Miquel Coca, a business owner in Barcelona, vowed that the secession push wouldn’t falter.

“All the negative inputs that we have received help us to unite the society even more,” Coca said. “If we can’t have this leader, well, then there will be another. This is a movement of the people, not of one person.”

Puigdemont, 55, is a former journalist and mayor of Girona who was thrust to the forefront of Catalonia’s independence push when he was handpicked by predecessor Artur Mas to become regional president in 2016. He withstood intense political pressure from Spanish Prime Minister Mariano Rajoy and Spain’s courts as he piloted the secession bid.

Spain had originally asked for Puigdemont’s extradition from Belgium after he moved there, but later withdrew the request until Spanish Supreme Court judge Pablo Llarena concluded his investigation this week. Llarena ruled that a total of 25 Catalan separatists would be tried for rebellion, embezzlement or disobedience.

In the meantime, Puigdemont was free to make trips to Denmark, Switzerland and Finland, as part of his effort to gain international support for the secessionist movement.

Puigdemont was also able to successfully run a campaign as the head of his “Together for Catalonia” bloc in a regional election in December in which separatist parties maintained their slim majority in Catalonia’s regional parliament. 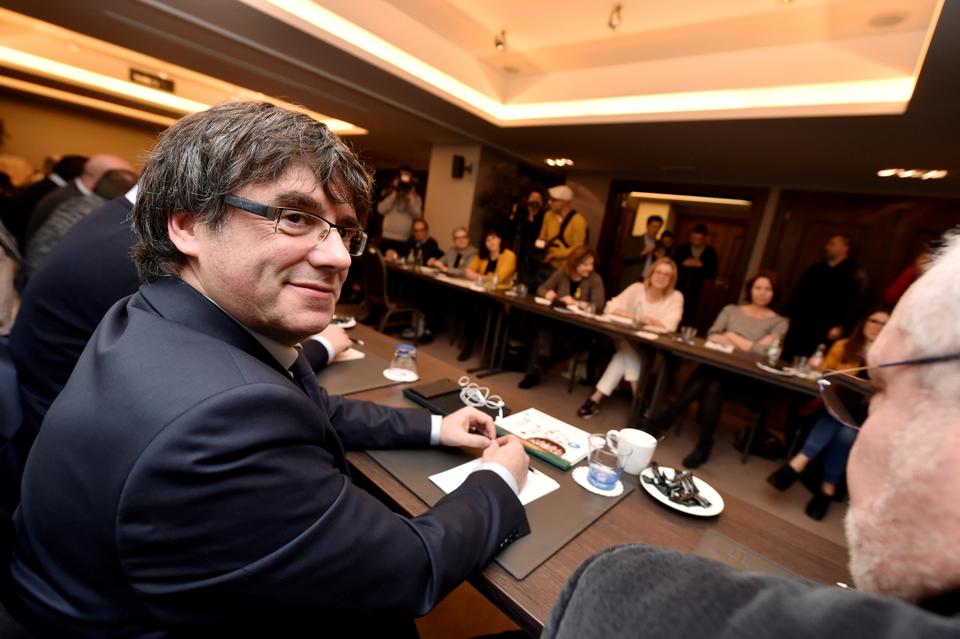 Carles Puigdemont had been visiting Finland since Thursday, but slipped out of the Nordic country before Finnish police could detain him. (March 14, 2018) (Reuters)

He had wanted to be re-elected as Catalonia’s regional president — albeit while remaining abroad to avoid arrest — but eventually was stopped by a Spanish court.

Separatists in Catalonia are currently trying to elect a leader for the regional government before a two-month time limit is up and new elections are called.

Spain’s Constitution says the nation is “indivisible” and any changes to its top law must be made by its national parliament in Madrid.

Nine people who promote Catalan secession have been placed in pre-trial custody to prevent what Llarena considered a flight risk or intention to continue with independence efforts.

Polls show Catalonia’s 7.5 million residents are equally divided over secession, although a majority support holding a legal referendum on the iss