UK lawmaker Damian Collins has urged Facebook founder Mark Zuckerberg to reconsider his refusal to appear before the British parliament about data leaks and the rise of fake news. 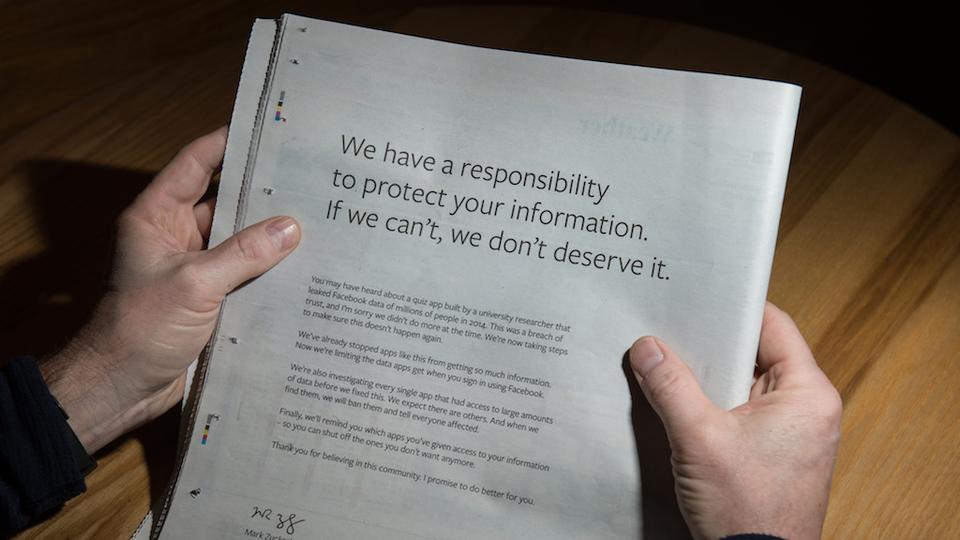 A man reads a full-page advertisement, taken out by Mark Zuckerberg, the chairman and chief executive officer of Facebook to apologise for the large-scale leak of personal data from the social network, on the back page of a newspaper, in Ripon, England on March 25, 2018. (AFP)

Facebook CEO Mark Zuckerberg’s decision not to answer questions from British lawmakers about a scandal over the firm’s data is “astonishing,” the parliamentary committee chief who invited him to attend said on Tuesday.

“Given the extraordinary evidence that we’ve heard so far today, it is absolutely astonishing that Mark Zuckerberg is not prepared to submit himself to questioning,” Damian Collins said.

Collins, the chairman of the House of Commons digital, culture and media committee, was speaking during a hearing with a whistle-blower from political consultancy Cambridge Analytica, the firm which got hold of data of millions of Facebook users.

“These are questions of a fundamental importance and concern to Facebook users, as well as to our inquiry as well. We would certainly urge him to think again if he has any care for people that use his company’s services,” Collins added.

Pressure from the EU

Collins had earlier said it was “appropriate” for Zuckerberg to offer an explanation himself, whether in person or via video-link.

In a letter published by the British committee on Tuesday, Facebook offered to send chief technology officer Mike Schroepfer or chief product officer Chris Cox to London next month to provide answers.

Collins’ comments came amid renewed pressure from the European Union to disclose more details about how up to 50 million users’ data was alleged to have been taken from Facebook and used in political campaigns.

The EU has given the social media giant two weeks to answer its own queries over the scandal, which has heavily hit Facebook’s share price and raised major questions over how social media companies use private data.