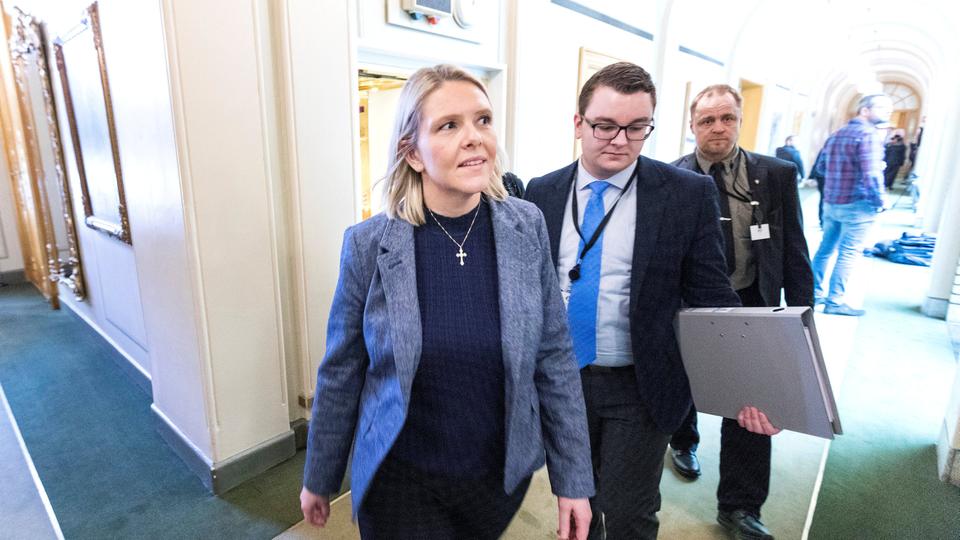 Norway’s Justice Minister Sylvi Listhaug and her political adviser Espen Teigen are seen in the Norwegian parliament after several parties supported a motion of no-confidence against her in Oslo, Norway on March 15, 2018. (Reuters)

A potential collapse of the minority Norwegian government was averted on Tuesday after a senior minister resigned for writing a Facebook post claiming the opposition Labor Party was more interested in protecting the rights of terrorists than the Norwegian people.

The comment earlier this month by Justice Minister Sylvi Listhaug touched a raw nerve in a country still tormented by memories of the July, 2011 attack by far-right terrorist, Anders Behring Breivik.

Breivik opened fire on the annual summer camp of the left-wing Labor Party’s youth wing on their holiday camp on Utoya Island, killing 69 people, mostly teenagers. He had earlier murdered eight in a car bomb attack in downtown Oslo.

The resignation of Listhaug, who represents the anti-immigration Progress Party in the minority right-wing coalition government, has eased the immediate pressure on Prime Minister Erna Solberg, who had publicly supported the minister.

Opposition lawmakers had tabled a confidence vote in the minister for later on Tuesday, which she looked set to lose. That would have forced Solberg to either fire Listhaug or dissolve the three-party minority government.

“The most important thing for me is the Progress Party,” Listhaug said as she announced her resignation. Progress is the junior partner in the Conservative-led government.

Listhaug, a polarising force in Norwegian politics for her direct style and strident views on immigration, has been under pressure since her March 9 post.

In it, she said: “Labor thinks terrorists’ rights are more important than the security of the nation. Like and share.” The comment was accompanied by a picture of masked men in black scarves and military clothing.

Her post came in response to Labor opposing a bill that would have allowed the government to strip terrorists or suspected terrorists, who have travelled overseas, of their Norwegian citizenship.

A week after the post, Listhaug removed it and apologised.

“It would have solved everything if the Prime Minister and the leader of the Progress Party had just removed her,” said Eirik Holmoyvik, professor of constitutional law at the University of Bergen.

“But that would have infuriated parts of the electoral base of the Progress Party. Many people are saying that it was incredibly selfish of her to have not resigned sooner.”