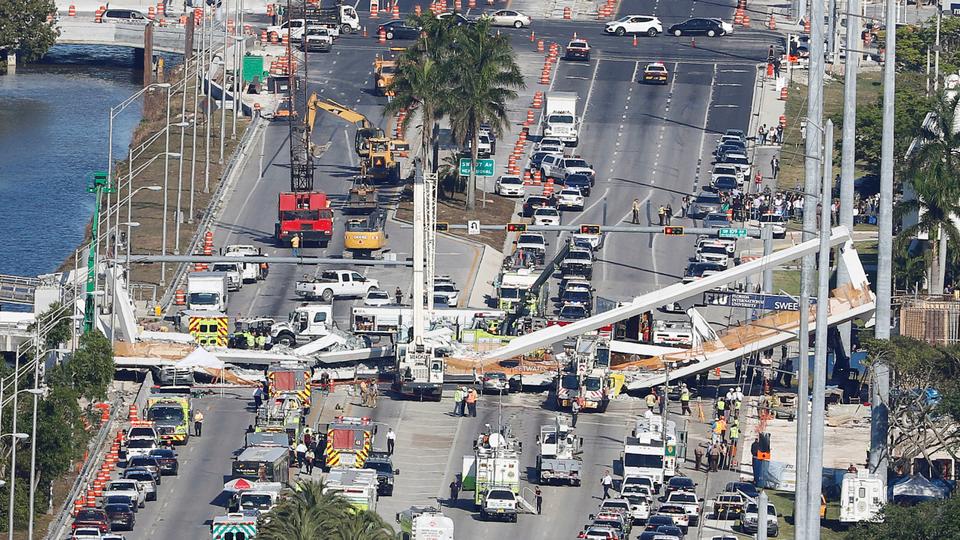 The death toll from the collapse of a pedestrian bridge has risen to at least six, Miami police said Friday as crews searched under the huge concrete slabs which fell onto a busy highway.

The operation has shifted from rescue to body recovery, with engineers fearing the support structures at either end of the bridge could also come down, Miami-Dade police spokesman Alvaro Zabaleta told reporters.

“The entire bridge is in jeopardy,” he said.

The walkway, which connects Florida International University to a student housing area, went up less than a week ago but was not yet operational.

Ten people were taken to a hospital, Zabaleta said, with emergency crews working all through the night at the scene.

Video footage on CNN shows the concrete structure suddenly crashing onto the road below.

Police detective Juan Carlos Llera said when the bridge came down, it “sounded like an explosion. A huge bang.”

The bridge was suspended from cables which had come loose and while they were being tightened, the whole thing collapsed, Florida Senator Marco Rubio wrote on Twitter.

The bridge had only been installed on Saturday, ahead of its planned opening in 2019.

Isabella Carrasco, who arrived at the scene shortly afterwards, told CNN some cars were completely crushed and that there was “a lot of debris everywhere.”

She saw one woman get out of a car that was “just nicked” and rescue personnel performing life-saving CPR on another person in the road.

Another shaken driver, Lynnell Collins, told CNN he was about to make a right turn when “the whole thing really just came down.”

“I got out of my car and me and a few other people were sprinting over there. We started helping people whose cars were at least half crushed and whoever was easily saved.”

He said he saw two trucks that were completely crushed.

Continuing to monitor the heartbreaking bridge collapse at FIU – so tragic. Many brave First Responders rushed in to save lives. Thank you for your courage. Praying this evening for all who are affected.

The university had only recently been celebrating the construction of the bridge across a busy and dangerous section of highway that students said had been the scene of accidents.

It had been erected using an accelerated modular building method that enabled it to go up in the space of a day.

“We are stunned by today’s tragic collapse of a pedestrian bridge,” said FIGG Engineering Group, one of the partners involved in the walkway’s construction.

“We will fully co-operate with every appropriate authority in reviewing what happened and why,” the firm said in a statement.

“In our 40-year history, nothing like this has ever happened before.”

“Many brave First Responders rushed in to save lives. Thank you for your courage. Praying this evening for all who are affected.” he said.

Bridge collapses in the United States are infrequent despite rising risks associated with ageing infrastructure.

The deadliest such incident this century was in Minneapolis, Minnesota in 2007, when an eight-lane bridge collapsed into the Mississippi River, killing 13 people.