Tillerson’s imminent departure had been rumoured for several months following reports of friction with US President Donald Trump. But the tensions peaked last fall amid reports Tillerson had called Trump a “moron” and considered resigning. 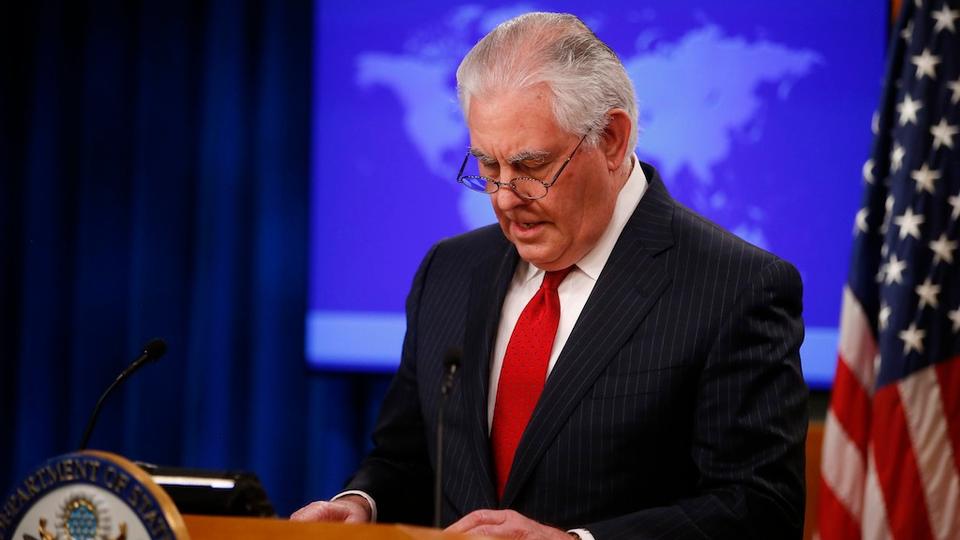 US Secretary of State Rex Tillerson speaks to the media at the US State Department after being fired by President Donald Trump in Washington, US, March 13, 2018. (Reuters)

US President Donald Trump fired Secretary of State Rex Tillerson on Tuesday after a series of public rifts over policy on North Korea, Russia and Iran, replacing his chief diplomat with loyalist CIA Director Mike Pompeo.

Tillerson said he was delegating all of his responsibilities to the State Department’s No. 2 official and that he would leave office at the end of the month.

“What is most important is to ensure an orderly and smooth transition during a time that the country continues to face significant policy and national security challenges,” Tillerson told reporters in a packed briefing room at the State Department.

The biggest shakeup of Trump’s Cabinet since he took office in January 2017 was announced by the president on Twitter as his administration works toward a meeting with the leader of North Korea.

Some foreign policy experts criticised the decision to swap out top diplomats so soon before the unprecedented meeting and worried that Pompeo would encourage Trump to scrap the Iran nuclear deal and be hawkish on North Korea.

Trump chose the CIA’s deputy director, Gina Haspel, to replace Pompeo at the intelligence agency. She is a veteran CIA clandestine officer backed by many in the US intelligence community but regarded warily by some in Congress for her involvement in the agency’s “black site” detention facilities.

“We got along actually quite well but we disagreed on things,” Trump said on the White House lawn on Tuesday. “When you look at the Iran deal: I think it’s terrible, I guess he thinks it was OK. I wanted to break it or do something, and he felt a little bit differently.”

Trump said he and Pompeo have “a similar thought process.”

Pompeo, a former Army officer who represented a Kansas district in Congress before taking the CIA job, is seen as a Trump loyalist who has enjoyed a less hostile relationship with career spies than Tillerson had with career diplomats.

Senior White House officials said Trump wanted his new team in place before any summit with Kim Jong-un, who invited the US president to meet by May after months of escalating tensions over North Korea’s nuclear and missile programs.

Tillerson’s imminent departure had been rumoured for several months; and Trump said he and Tillerson had discussed the move for a long time. But Steve Goldstein, a State Department undersecretary of state for public affairs, said Tillerson did not know why he was being pushed out and had intended to stay.

Goldstein was fired later on Tuesday, two US officials said.

Many Democrats in Congress expressed dismay at the firing, which they said would sow more instability in the Trump administration at a crucial time.

Foreign policy experts from Republican and Democratic administrations also questioned Trump’s timing and choice, noting that Pompeo was known as a political partisan who strongly opposed the 2015 Iran nuclear deal.

Evans Revere, a former senior US diplomat who dealt with North Korea under President George W Bush, said Trump’s move sends “a bad signal about the role of diplomacy.”

“Tillerson’s replacement by … Pompeo, who is known as a political partisan and an opponent of the Iran agreement, raises the prospect of the collapse of that deal, and increases the possibility that the administration might soon face not one, but two nuclear crises,” he said.

Senior White House officials said White House chief of staff John Kelly had asked Tillerson to step down on Friday but did not want to make it public while he was on a trip to Africa. Trump’s Twitter announcement came only a few hours after Tillerson landed in Washington.

On Monday, Tillerson blamed Russia for the poisonings in England of a former Russian double agent and his daughter. Earlier at the White House, press secretary Sarah Sanders had refrained from saying Moscow was responsible.

He appeared to be caught by surprise last week when Trump announced he had accepted Kim’s invitation to meet.

Out of the loop

In December, Tillerson had offered to begin direct talks with North Korea without pre-conditions, backing away from a US demand that Pyongyang must accept that any negotiations would be about giving up its nuclear arsenal.

The White House distanced itself from those remarks, and a few days later, Tillerson himself backed off.

Several months earlier in Beijing, Tillerson said the United States was directly communicating with North Korea but that Pyongyang had shown no interest in dialogue. Trump contradicted Tillerson’s efforts a day later.

I told Rex Tillerson, our wonderful Secretary of State, that he is wasting his time trying to negotiate with Little Rocket Man…

Tillerson had joined Defense Secretary Jim Mattis in pressing a sceptical Trump to stick with the agreement with Iran and other world powers over Tehran’s nuclear ambitions; and he has taken a more hawkish view than Trump on Russia.

If confirmed by the US Senate after an April committee hearing, Pompeo will be taking over a State Department shaken by the departures of many senior diplomats and embittered by proposed budget cuts.

Lawmakers from both major parties have criticised those cuts and the administration’s failure to fill dozens of open jobs there.

Tillerson faced a tougher confirmation that most nominees to be secretary of state last year as Democrats grilled him about his oil business ties to Russia.

But over time, many lawmakers grew to appreciate Tillerson as a relatively steady hand in the chaotic Trump administration.

“He represented a stable view with regard to the implementation of diplomacy in North Korea, Iran and other places in the world,” said Senator Ben Cardin, the top Democrat on the Senate Foreign Relations Committee during most of Tillerson’s tenure.