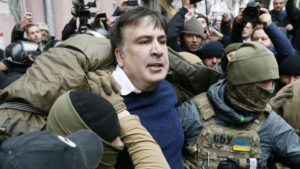 “This person was on Ukrainian territory illegally and therefore, in compliance with all legal procedures, he was returned to the country from where he arrived,” spokesperson Oleh Slobodyan said in a post on Facebook.

Earlier, Saakashvili’s official Facebook page and spokesperson said that he was detained by unknown “kidnappers” in Kiev.

“Unknown people in masks seized Mikheil Saakashvili and took him away … The kidnappers were in a white minivan,” the post read.

His spokesperson said he had been taken by men in green camouflage and his whereabouts were unknown.

The border service later confirmed that Saakashvili was dispatched to Poland.

Last week his lawyer warned he could face imminent deportation or extradition after he lost a court appeal.

President of his native Georgia for nine years until 2013, Saakashvili moved to Ukraine after a popular uprising there and served under Ukrainian President Petro Poroshenko as a regional governor from 2015-2016, before falling out with the Ukrainian leader.

The 49-year-old, who accuses the Ukrainian authorities of widespread corruption, may face extradition after his appeal for protection was rejected by a Kiev court on February 5.

He is wanted in Georgia on four charges including abuse of office, which he says are trumped up.

Video purports to show reported detention of @SaakashviliM moments ago at a Georgian restaurant in Kyiv. Agents reportedly from Border Guards Service, which may suggest deportation or extradition. Let's see how this plays out… https://t.co/6CSwIYjEr5 pic.twitter.com/0loTJrwz5e

The Ukrainian court upheld an earlier ruling to deny him the status of a person in need of additional protection.

His lawyer, Ruslan Chernolutsky, said the ruling would likely pave the way for Saakashvili’s departure from Ukraine.

“We all need to be prepared for the fact that the authorities in an illegal manner will take the decision on his compulsory deportation or possible extradition,” he said.

The authorities accuse him of assisting a criminal organisation, which he calls a fabricated allegation to undermine his campaign to unseat Poroshenko.