Heatstroke kills three people in Spain as the most severe heatwave grips the continent with temperatures touching a scorching 45 degrees Celsius in some areas. 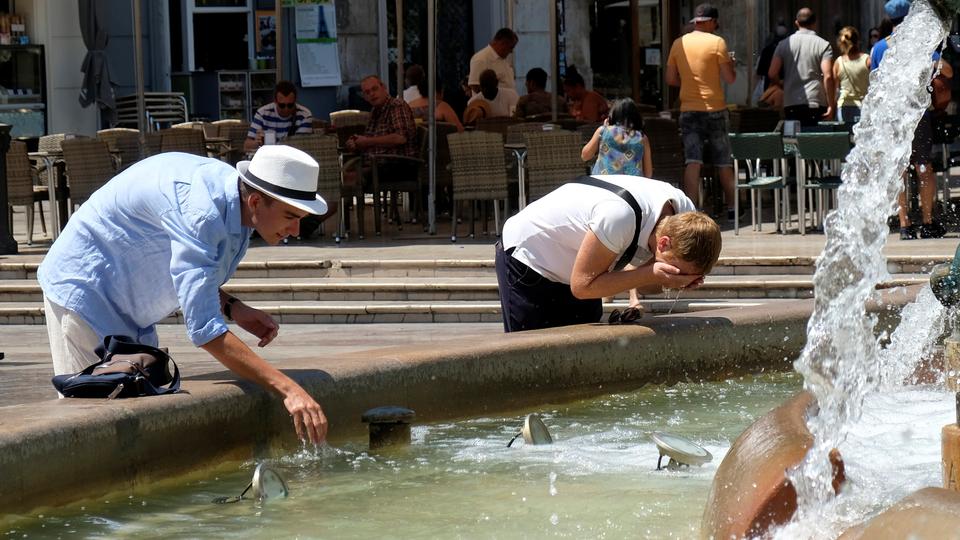 Tourists cool off at a fountain during the heatwave at the Virgin Square in Valencia, Spain, on August 3, 2018. (Reuters)

Three people died from heatstroke in Spain as Europe sweltered in a record heatwave on Friday, with temperatures hitting a scorching 45 degrees Celsius in some areas and meteorologists saying only scant relief is in sight in the coming days.

A middle-aged man in Barcelona, who media said appeared to be homeless, was found collapsed on a street and taken to hospital where he later died of heatstroke, Catalonia’s civil protection agency said in a statement.

Two other men – a roadworker in his 40s and a 78-year-old pensioner – also died from heatstroke this week.

The highest temperature ever recorded in Europe was 48 degrees in Athens in 1977, closely followed by 47.3 in Amareleja, Portugal in 2003 as well as in Montoro, Spain last year.

Europe’s heatwave gripped Spain and Portugal, as governments checked for forest fires, a Budapest game reserve fed its animals iced snacks and a Finnish supermarket invited customers to sleep over to stay cool.

Summer has brought drought and forest fires as far apart as Britain and Greece, where scores of people died, and Sweden warned of forest fires on Friday.

Hot air from North Africa has caused the most severe heatwave since 2003 in Iberia.

The searing weather has devastated crops across Europe and farmers farmers are warning this year’s harvest will lead to higher prices.

Eight places in the centre, south and east of Portugal broke their local temperature records, with officials forecasting on Friday the heatwave would continue and possibly worsen over the weekend.

Temperatures built to around 45 degrees (Celsius) in many inland areas of Portugal on Friday, and were expected to peak at 47 degrees in some places on Saturday.

Large parts of Portugal are on red alert on the Civil Protection Agency’s danger scale.

Portugal’s Civil Protection agency reported 426 firefighters were putting out or checking fire alerts in the north and centre.

Fires typically flare late in the day when the weather is hottest.

In Portugal, local media said temperatures could beat Death Valley in California, one of the world’s hottest places.

The country is on alert to prevent a repeat of its worst fires in history last year when 114 people died.

“I don’t want to say anything bad but yesterday, while I was watching TV, I thought the same could happen here but I’m praying it doesn’t,” said Eva Stigliano, a Greek tourist visiting Portugal for the third time.

“I’ve been here in the summer but it has never been this hot.”

Spanish authorities issued a heatwave warning for most of central Spain, expected to last until Sunday with temperatures of over 42 degree Celsius in some parts of Andalusia and Extremadura. 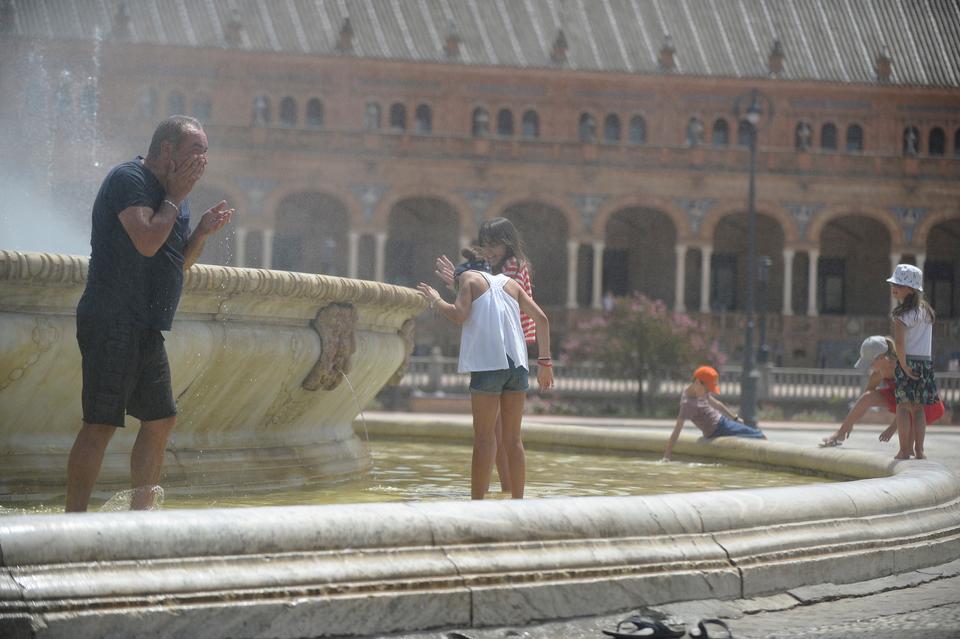 People refresh themselves in a fountain at Plaza de Espana, on a hot summer day in Sevilla, Spain on August 1, 2018. (AFP)

A branch of the K-Supermarket chain in Helsinki’s Pohjois-Haaga district has invited 100 customers to sleep in its air-conditioned store on Saturday.

In Germany, state rail operator Deutsche Bahn said it was offering free water to passengers in case of delays and would keep air conditioning running on its trains even when they are empty.

Tourists took shelter under umbrellas outside the Louvre Museum in Paris and ignored ‘No Bathing’ signs to paddle in the fountains.

In Switzerland, mountain railways reported booming business as city dwellers fled to the Alps. Fishery authorities in the canton of Zurich were combing creeks to rescue fish from suffocation as streams dry up or oxygen levels plunge.

The small Budakeszi game reserve outside the Hungarian capital Budapest said it was helping its animals cope with the heat with iced fruit and a diet with less meat and more nutrients.

In Scandinavia, temperatures hit records until a few days ago. In Sweden, July was a record month and wildfires burnt in parts of the country.

Authorities in Sweden and Poland warned against swimming due to a bloom of toxic algae spreading caused by hot weather.