Ankara says comments made by the ambassadors of Israel and Egypt to Cyprus indicating readiness for a military showdown with Turkey over hydrocarbon exploration in the Eastern Mediterranean are “out of place.” 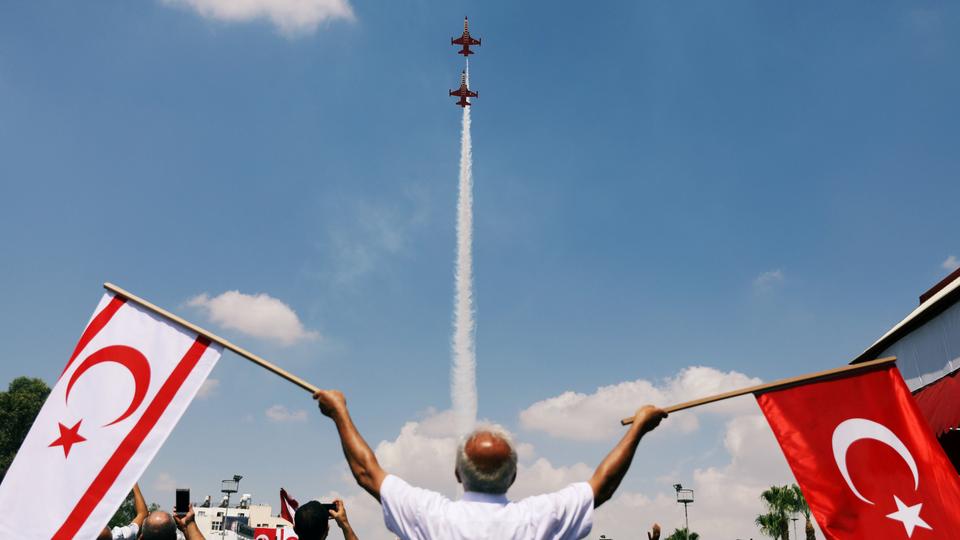 Turkey’s acrobatic aircrafts fly over a parade to mark Turkey’s military intervention into the Cyprus conflict in 1974 in response to a briefly lived Greek-inspired coup, in northern Nicosia, Turkish Republic of Northern Cyprus, on July 20, 2018. (Reuters)

Turkey’s Foreign Ministry has warned ambassadors to the Greek Cypriot-administered southern Cyprus to not “exceed their limits” in response to the envoys of Israel and Egypt, who last week both suggested that military action against Turkish naval forces in the Eastern Mediterranean was an option.

During a three-day conference for Greek Cypriot diaspora in the island’s divided capital Nicosia between July 25 and July 27, Sammy Ravel, the Israeli ambassador to the internationally recognised Republic of Cyprus, had reportedly said he hopes military force will not have to be used against “Turkish provocations” in the region.

Egypt’s ambassador, Mai Taha Muhammed, meanwhile is reported to have said that Egypt will not hesitate to take military action on Turkish navy vessels off Cyprus “if necessary.” Also speaking during the conference, US ambassador to the island, Cathleen Doherty, described Turkey’s behaviour towards the Greek Cypriot administration as “unacceptable.”

Turkey, which recognises the breakaway Turkish Republic of Northern Cyprus as the sole authority in Cyprus, has for years slammed the Greek Cypriot administration’s unilateral moves to exploit natural gas reserves in its waters to the exclusion of the Turkish Cypriots in the island’s north.

Ankara insists that a lasting peace deal must be reached between the Turkish and Greek Cypriots before international agreements over the hydrocarbon reserves can be made.

The Greek Cypriot administration has proceeded to sign deals with neighbours Egypt and Israel, and hopes to export the gas to Europe via an undersea pipeline to Greece. This option would in effect bypass Turkey, leaving it out of the Eastern Mediterranean gas bonanza completely.

“We find the words of support offered by some ambassadors in recent days to the Greek Cypriot administration for its unilateral hydrocarbon explorations in the Eastern Mediterranean out of place,” a statement released on Monday by the Turkish foreign ministry said. “We advise the ambassadors of the relevant nations to not exceed their limits.”

Adding that Turkey finds the Greek Cypriot administration’s unilateral moves to exploit hydrocarbon reserves before a peace deal has been reached in Cyprus to be “unacceptable,” the ministry accused the Greek Cypriot side of ignoring the rights of Turkish Cypriots on the island.

“Like we have stated many times before, our country will continue to defend the rights and interests of the Turkish Cypriots,” the statement added.

Turkish Cypriots have remained internationally isolated since declaring the independence of the Turkish Republic of Northern Cyprus in 1983 after almost a decade of failed attempts to reunite the island, which was divided after a conflict in 1974.

Turkey, which according to a 1960 treaty is a legal guarantor of peace in Cyprus, has maintained security in the Turkish Cypriot north after launching a military intervention in response to a coup by the Greek junta on the island.

The coup on July 15, 1974 aimed to annex Cyprus to Greece, which was itself at the time being run by a military regime.

Turkey, which says it seeks a “just and lasting” deal in Cyprus, encouraged the reunification of the island in a 2004 referendum, for which Turkish Cypriots voted “yes” but Greek Cypriots voted “no.”