Three firefighters, a 70-year-old woman and her two great-grandchildren are among seven people killed by wildfires in northern California. 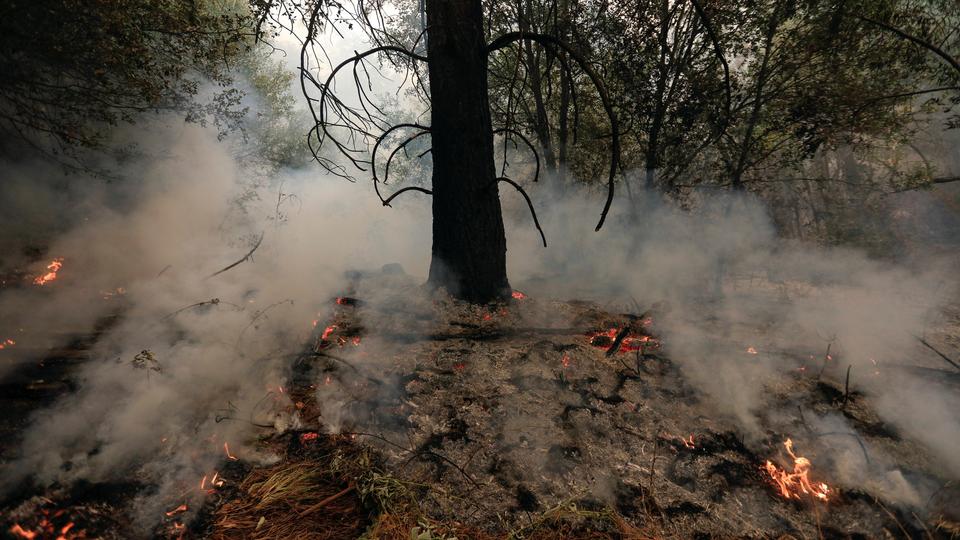 Underbrush burns on the south edge of the Carr Fire near Igo, California, US, July 29, 2018. (Reuters)

The death toll in California wildfires rose to seven as shaken survivors recounted the horror of watching fast-moving flames whip through neighbourhoods and devour their homes.

An army of firefighters from across the country struggled in California on Monday to control 17 large-scale blazes that have reduced expensive homes to smouldering piles of rubble and turned tens of thousands of acres into ashen wastelands.

“I’ve been a lifelong resident of this community, and I’ve never seen a fire with such destruction here in this area ever before,” said Shasta County Supervisor Leonard Moty commenting on the Carr fire, one of the largest.

Alyce Macken said she had only minutes to flee her home in the town of Redding with her husband Ted as the flames swept closer.

“At six o’clock in the morning there was a knock on the door, a pounding, and it was the sheriff telling us that we had 15 minutes to get out,” Macken told AFP.

“We were out in 10 minutes. I was shaking, it just went by really fast.”

Macken, who is retired, told AFP that she met other panic-stricken neighbours at a nearby shopping centre – and watched from afar as her home went up in flames.

Some 38,000 people have been evacuated in Shasta County due to the Carr fire, officials said.

According to the California Governor’s Office of Emergency Services (Cal OES), 12,000 firefighters from as far away as Florida and New Jersey have deployed across the state.

Jay Gray has the latest from Redding, California.

A firefighter identified as Brian Hughes died on Sunday while battling the Ferguson Fire, which is near Yosemite National Park.

Hughes “was struck and killed by a tree” while fighting the blaze, the Sequoia and Kings National Parks Service said. “We grieve his loss,” they wrote on Twitter.

The remains of a person who ignored Carr fire evacuation orders was found in a burned out residence on Sunday, said Shasta County Sheriff Tom Bosenko.

Two firefighters were killed earlier battling the Carr blaze and three people – a 70-year-old woman and her two great-grandchildren aged four and five – perished when their Redding home was swallowed up by flames.

He also said that 600 National Guard soldiers had been deployed to help in support duties such as roadblocks.

Donna and Billy Gill were forced to flee their Redding home and did not know when they would be allowed to return.

“Just the not knowing is probably the hardest part,” Donna Gill told the Redding Searchlight newspaper. “This is just unbelievable. I don’t know. You don’t know what to say. We’re all in it together, that’s for sure.”

“Everyone we come into contact in those neighbourhoods – if they don’t have a legitimate reason to be there, if we don’t arrest them for looting they’ll be arrested for something else,” he said.

Two people, a man and a woman, were later arrested on suspicion of looting evacuated homes in Redding.

The alleged burglars were tracked down and found with electronic items stacked by their front door, the sheriff’s department said.

One evacuee who had been forced to move four times warned that a 14-foot long albino python that she owned was lost at her latest stop in south Redding.

“Eres is a beautiful, friendly snake,” said Sandra Dodge-Streich, the owner of Redding Reptiles, on Facebook.

“She is part of our store family and Reptile Exhibit. Please don’t be afraid of her– she is lost and scared!”

“We’re feeling a lot more optimistic … as we’re starting to make up some ground instead of being on the defensive,” he told reporters.

Gouvea, however, said he was wary of unpredictable weather.

It described the Carr blaze as “a large and dangerous” fire “in which spreading is not driven by the wind, but rather the fire itself.”

Dangerous and irregular fire-generated wind “and fire-induced whirlwinds are possible … threatening life and property,” it said.

California Governor Jerry Brown has declared a state of emergency in Shasta County, as well as in the counties of Lake, Napa and Mendocino.