While the French football team symbolises the acceptance of migrants, the country is divided over the issue of refugees. Will a victory in the World Cup change that?

French team is dominated by players who can trace their roots to other countries. (AP)

Following the French team’s amazing performances in both the quarter final and the round of 16 thriller against Argentina, many in France are looking forward to the big contest with Belgium in tonight’s semi-final, a formidable foe also known as “Les Diables rouges.”

Should the French win this year’s World Cup, it will largely be done in spite of the criticism of the team’s multiracial composition from far-right politicians.

During the 2006 World Cup, he claimed that “there is an exaggerated proportion of multiracial players on the French national team”.

And in 2016, Marion Le Pen, granddaughter of Jean-Marie Le Pen, said that “Karim Benzema should go back to Algeria” after the Real Madrid striker claimed his love for Algeria, his parents’ country.

French footballer and Real Madrid striker Karim Benzema faced the wrath of far-right after he expressed his love for Algeria, the country of his parents. (AP Archive)

Those who support the conservatives, share similar feelings about the migrants — no matter what their achievements.

Jean Philippe, a former National Front activist and IT manager near the city of Lyon, told TRT World that 16  out of 23 players in the  French team “come from Africa” and that the  French team is the “6th African team in the (World)Cup.”

Jean was once an “ultra”, a label given to fanatic and dedicated fans of some of the biggest clubs in Europe. Now, though, he “feels closer to the Russian or Croatian teams than the French team.”

“The French team represents a fantasy, not the real country. Can you imagine a black Japanese team?” he asks.

“This roster is a way to foster the ideology of immigration in a country where almost 80 percent  people reject migrants!”

Although he recognises and even comes “to appreciate Nigerian or Senegalese team,” he refuses “to support an African-French team. Everyone  (should) stay in their own home!”

For some people, French players such as Killian Mbappé, Nabil Fekir and Paul Pogba are not considered as French as Antoine Griezmann or Olivier Giroud.

For some people, Olivier Giroud (L) is more French than Paul Pogba whose father came from Guinea. (AP Archive)

Because of their African forbearers, they are not seen as having rights to claim ownership of tri-colour flag.

The dynamics, however, are more complicated than just anti and pro-immigrant positions. Although, for example, Kylian Mbappé was raised by an Algerian mother and a Cameroonian-father in Bondy (a Paris working-class suburbs), he is held up as a dazzling symbol of French talent, garnering praise from figures across the political spectrum.

Even Marine Le Pen, the current leader of the National Front, tweeted her support for the French team after they won against Uruguay, reflecting a more nuanced discussion.

The day they stood together

In France, nobody has forgotten the evening of July 12th in 1998, when 1.5 million people gathered on the Parisian Champs-Elysées and across the country, celebrating the French team’s victory in the World Cup.

As the country gets ready for their semifinal, the possibility of a repeat of the victory in 98 has begun to emerge.

Razik Metiche, 35, an author of Algerian background, predicts “a second episode of 1998” which he says  could send a positive message on multiculturalism.

“Look at Raymond Kopa, a French footballer with Polish background who passed away in 2017. His journey speaks to everyone.”

However, Metiche also knows that “politicians use football as a way to put a mask on what they can not sort out: unemployment, racism, discriminations…”

But the joy seen in 1998 was short-lived lasting only a summer, with the rifts only papered over. So would a French victory in this year’s World Cup help transcend racial barriers this time?

Nabil Djellit, a famous French sports reporter with over 200 000 followers on Twitter, regularly stirs debate with his views. “We expect them to take up the struggle against racism but that is not their role as footballers,” explains Djellit.

As a journalist with an Algerian background, he has a firm grasp of the political and social issues around football in France.

“The French team is a way for France to take a look in the mirror. Even if most of the players grew up in working class areas and are of African descent, they are now powerful, rich and famous.

“But, this team represents only a handful. In others words, they are the embodiment of an anomaly, in comparison to the rest of minorities.”

Whether it be Mbappe or Blaise Matuidi, or any of the other French players of migrant background, they reflect a global image of minorities but “they don’t have to carry that torch individually,” Nabil Djellit said.

Football is always political, he says, whether you are an “activist” player or not.

In 1998, many French newspapers extolled “The French diversity model.”

But Djellit believes, “politicians seized on the 1998 feat, as  Jean-Marie Le Pen reached the second round of the presidential election in 2002.”

Yvan Gastaut, a historian and expert on football and immigration,  argues that “if we take 1998 as a historical event, it forced France to reflect on its stance on integration.”

In particular with this new generation, there appears to be an overt focus on expressions of Islam and Muslim-ness.

When Franck Ribery converted to Islam couple of years ago, he was forced to publicly stress on his French identity.

In 2011, he told Canal+ “…my conversion annoyed a lot of people but even though I am muslim, I am still French”, reflecting the tension that comes French who is also a Muslim.

Furthermore, in 2016, Deschamps and his staff decided that none of the players could fast as part of their observance of the Muslim holy month of Ramadan.

When he played for Caen in 2013, N’golo Kante used to hide about his fasting, according to teammate Jérôme Rothene.

The ongoing scrutiny of players if they openly express their Islamic beliefs confirms a certain taboo around Islam within top management.

In stark contrast to the triumph of 98 stands the controversy which unfolded at the the 2010 World Cup.

At the Knysna training ground, their camp for the tournament, the French players revolted against the management after teammate Nicolas Anelka’s expulsion for criticising the coach.

“After the 1998 fairytale, Knysna was the other side of the coin”, Gastaut says. From that moment, he adds, public opinion turned against the handful of millionaires from migrant backgrounds.

The case of Karim Benzema speaks for itself.

Recently left out of the French squad by Didier Deschamps, despite his good performance for European champions Real Madrid, Benzema was made to pay for having asserted that “Deschamps (current French coach) had given into France’s racists.”

In fact, according to Gastaut, “footballers have influence (and) that’s why executive managers always ensured to take them away from political issues. Footballers are paid and invited to play with a ball only, not to express their views on racism in French society.”

Ferhat Cicek manages the Paris Alesia Football Club in the 14th arrondissement of Paris, where he has access to a raft of football issues in the banlieues.

He says he is thrilled by the “multiculturalism of French team” but at the same time, points out “the lack of diversity within the French Football Federation  (FFF) hierarchy, which is a reflection of the whole French society.” 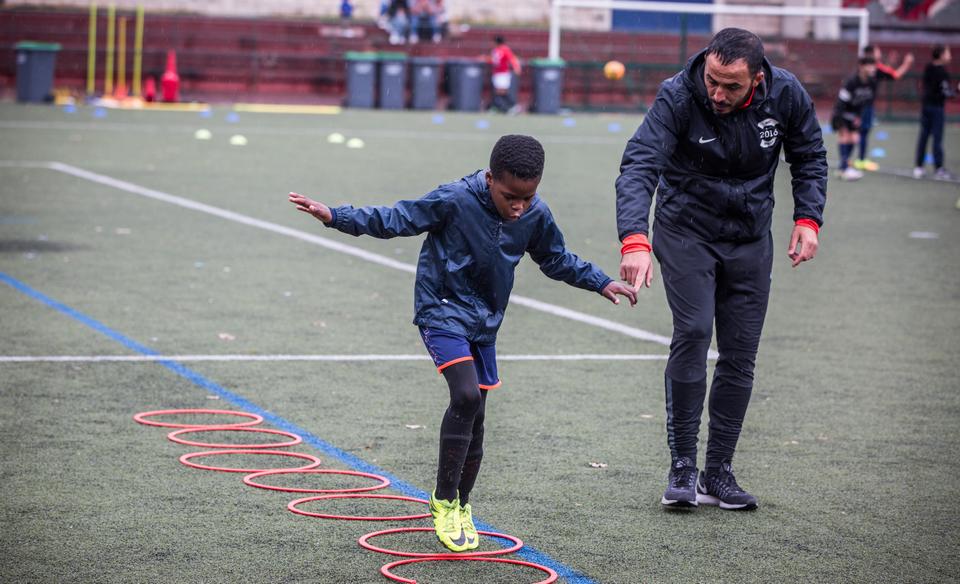 “Without them, French football would be at the same level as tennis championship! In others words, at a very low level,” insists Nabil Djellit.

Ferhat Cicek’s says absence of minorities become obvious in the upper rungs of French football management. “I have a hunch that minorities are useful for dealing with young players and increase subscriptions, whereas the top of the pyramid is beyond our reach.”

Beatrice Barbusse agrees. As the first woman in France to head a handball club, she doesn’t use stonewalling.

“Antoine Kambouaré is currently the only black football coach (Guinguamp) in France. Diversity is only visible at the grassroots level. It is a fact.”

In her view, “1998 harboured an illusion around Black-Blanc-Beur, and the worst thing is that people believe in this story!”

Although there is a realistic chance of a repeat of the victory in 98, the violence of structural racism persists.

And for the protestors, the performance of the French team was of little concern.

Daniel Ortega is causing a bloodbath in Nicaragua

The End of Mexican Democracy?

From Lima to Havana – a decisive moment for Latin America