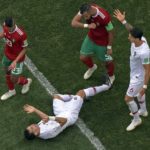 It’s become the talking point of the tournament but where does the term come from? And what are its worst examples?

Shithousery is a fairly nebulous term, taking in as it does pretty much all the dark arts employed on a football pitch – everything from diving to headbutting via haranguing the referee and time-wasting. Generally, in its most simple guise, shithousery is an attempt to gain an advantage by unfair means and therefore it has existed around football for a long time.

But from where does the phrase originate? Well, it has been around for a long time. Tony Crowley’s Liverpool English Dictionary traces the term back to scouse slang used in the 1960s. The Concise New Partridge Dictionary of Slang has an entry for “shithouse”, with definitions “an extremely unpleasant individual” and “a coward”.

Thus Neymar was both a victim and perpetrator of shithousery during one incident against Mexico. With Neymar on the ground by the touchline Miguel Layún wandered over and surrepticiously trod on the Brazilian’s ankle – classic shithousery designed to wind a player up in an attempt to provoke a more obvious act of aggression and therefore a red card. Neymar, though, reacted by screaming and rolling around on the floor as if on fire – top-level shithousery (also exhibiting a key facet of shithousing: not caring what anyone thinks of your shithousing, no matter how clear the shithousing is) aimed solely at getting Layún what he may or may not have deserved.

Portugal’s Pepe – the Mozart of shithousery – almost produced the coup de grace during his country’s game against Morocco. After aggressively challenging Mehdi Benatia at a corner (entry-level shithousing by Pepe’s standard) the Portugal defender flung himself to the turf when Benatia then tapped him on his back to remonstrate. If that were not enough Pepe then leaped to his feet to square up to his Moroccan opponent. That’s high-level shithousery.

Yes, shithousery isn’t just confined to the players – witness a middle-aged Peru fan clambering over several children in Australia tops to snatch Tim Cahill’s shirt at the end of the countries’ meeting in the group stage.