In June Greece and Macedonia signed a deal on a new name: “Republic of North Macedonia.”But President Gjorge Ivanov refused to sign the agreement, saying it violated the constitution. 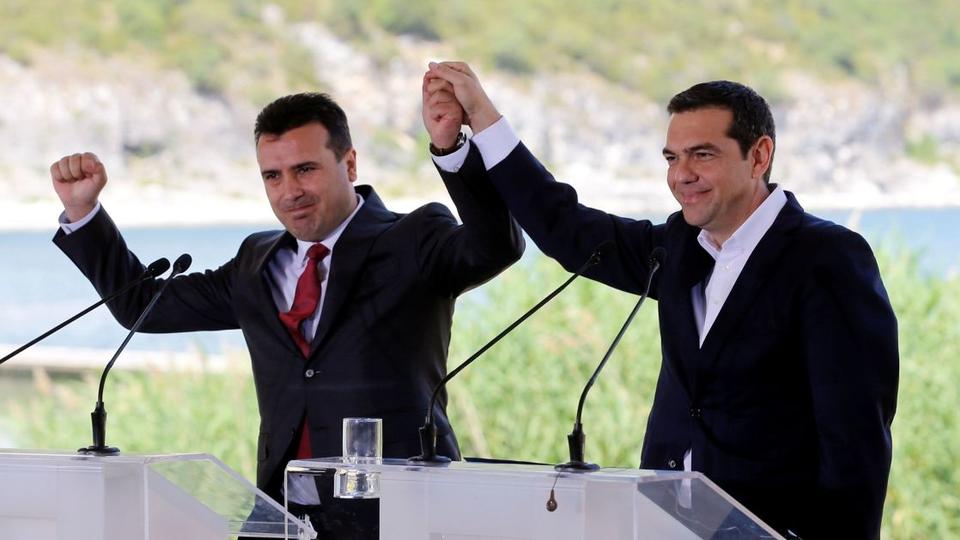 Greek Prime Minister Alexis Tsipras, right, and Macedonian Prime Minister Zoran Zaev join hands before the signing of an accord to settle a long dispute over the former Yugoslav republic’s name, in the Greek village of Psarades on June 17, 2018. (Reuters)

Macedonia’s parliament again endorsed a landmark agreement with neighbouring Greece to change the ex-Yugoslav republic’s name on Thursday, despite the refusal of President Gjorge Ivanov to sign it.

In June, the two countries settled on the new name “Republic of North Macedonia.” Athens had long objected to its northern neighbour’s use of “Macedonia,” saying it implied claims on the Greek province of that name and was an appropriation of Greece’s ancient cultural heritage.

The decades-old dispute had blocked Macedonia’s entry into NATO and its hopes to join European Union.

On Thursday 69 deputies in the 120-seat parliament voted in favour of ratification of the deal, its second such endorsement.

Opposition deputies from the rightist VMRO-DPMNE party, which opposes the deal, did not vote. One deputy abstained.

Nationalists in Greece, which must also ratify the name deal, remain vehemently opposed.

Last month, Ivanov refused to sign the ratified agreement, saying it violated the constitution. Ivanov can refuse to sign again, but cannot veto it indefinitely.

Parliament speaker Talat Xhaferi, an ethnic Albanian, said on Thursday he planned to send the agreement for publication in the official gazette without Ivanov’s signature.

Macedonia has to amend its constitution to conform with the provisions of the deal and a referendum is expected in the autumn.

Adoption of the agreement would pave the way for the next NATO summit to invite Macedonia to join the alliance and for the Balkan country to start membership talks with the EU.

Greece can do more to weed out corruption, watchdog agency says