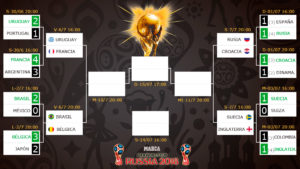 Sweden’s win over Switzerland and England’s victory over Colombia on penalties mean that the final pieces can be put in the draw for the quarter finals.

The final last 16 match went to a nerve-racking sudden death shoot out. Harry Kane put England ahead from the penalty spot before Yerry Mina equalised at the end of normal time with a header from a corner.

Uruguay vs France at 4pm (CET) and then Brazil vs Belgium at 8pm (CET) will be the first matches from the next round on Friday.