Mattis to visit China amid Korea talks and strategic tensions

US Secretary of Defense James Mattis says he wants to “take measure” of China’s strategic ambitions as he will make his first visit to China amid rising tensions. 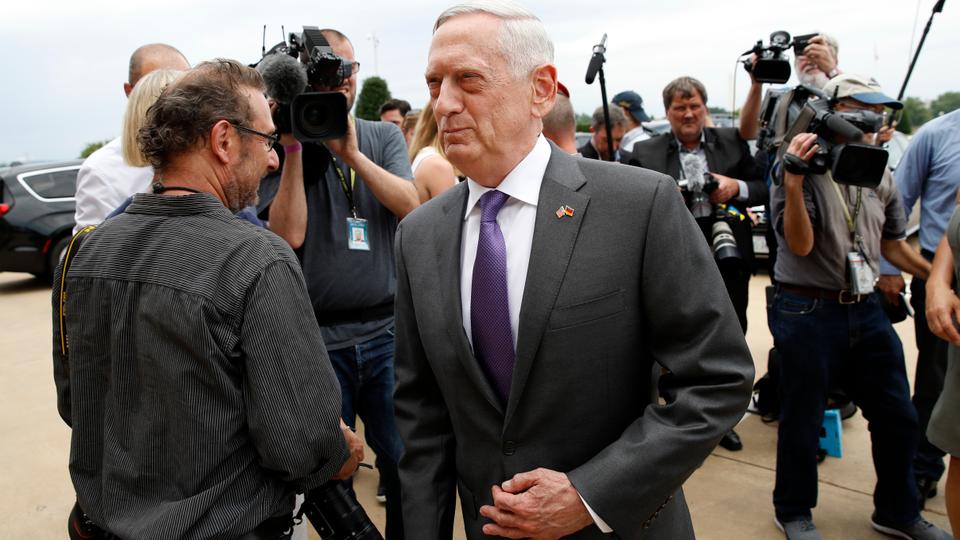 US Defense Secretary Jim Mattis steps away after speaking with the media at the Pentagon, in Washington, June 20, 2018. (AP)

US Secretary of Defense James Mattis will make his first visit to China this week amid rising tensions between the two countries but also a deep need for Beijing’s support in nuclear talks with North Korea.

Mattis told reporters on Sunday he wants to “take measure” of China’s strategic ambitions after it positioned weaponry on disputed islets in the South China Sea and is seeking to project its military power deep into the Pacific.

But in a four-day trip that will also include South Korea and Japan, the Pentagon chief also hopes to confirm China’s commitment to pressuring North Korea to give up its nuclear weapons, after the historic talks between President Donald Trump and Kim Jong-un in Singapore in early June.

The United States, China, Japan and South Korea “have a common goal: the complete, irreversible and verifiable denuclearisation of the Korean peninsula,” Mattis said.

In Beijing, from Tuesday to Thursday, Mattis will meet with senior Chinese defence officials.

Then he will travel to Seoul for talks with his South Korean counterpart Song Young-moo, followed by a stop on Friday in Japan to see defence chief Itsunori Onodera.

Those meetings are aimed at reassuring both allies that Washington’s regional defence commitment remains unchanged after Trump unexpectedly announced on June 12 that the US would suspend a major joint military exercise in South Korea following his meeting with Kim.

The visit to China comes amid bilateral strains that cross multiple sectors. The Trump administration is challenging China on trade, theft of industrial secrets, and cyberthreats.

In the defence sector, China’s decision to position military hardware in built-up atolls in the South China Sea has sparked new security concerns throughout Southeast Asia.

Signalling Washington’s displeasure, in May the Pentagon disinvited China from the 2018 Rim of the Pacific Exercise, in which some two dozen navies train together for mostly civilian missions.

Weeks later at the Shangri-la Dialogue security conference in Singapore, Mattis slammed China for showing contempt of other nations’ interests in the South China Sea.

“Despite China’s claims to the contrary, the placement of these weapon systems is tied directly to military use for the purposes of intimidation and coercion,” Mattis said.

The Chinese, who say the weaponry is only defensive in nature, retorted that Mattis had made “irresponsible comments” that “cannot be accepted.”

Mattis has visited Asia seven times in his 17 months since becoming defence secretary, but not China. He has yet to meet the new Chinese Minister of Defence Wei Fenghe.

He said the talks in Beijing seek to scope out China’s long-term strategic intentions and determine possible areas of military-to-military co-operation.

He declined to characterise the relationship, saying that could “poison the well” before he meets his counterparts.

But speaking separately a senior Pentagon official called the United States and China “strategic competitors” and suggested that Washington needs to keep up the pressure over the South China Sea buildup.

The Rimpac disinvite could be “just a first step”, the official said.

Mattis will also be adding his voice to North Korea talks, urging China to hold firm on commercial pressure on Pyongyang.

He said he has had daily discussions on the talks with the lead US negotiator, Secretary of State Mike Pompeo.

The senior US defence official said they are hoping to see a concrete outcome, including a timeline for commitments by Pyongyang, “soon.”

Mattis tied the suspension of exercises to the getting of concrete results.

“We’ll see if they continuing negotiations keep them that way.”

Mattis meanwhile confirmed that US officials are awaiting the imminent release by Pyongyang of the remains of US servicemen who died in the Korean war in the early 1950s.

Preparations to receive the remains have been made, he said, and “We’re optimistic that it will begin.”