The Former Yugoslav Republic of Macedonia has agreed to change its name to the Republic of North Macedonia to end a decades-long dispute with its neighbour Greece. The landmark accord has caused protestors to take to the streets in both countries. 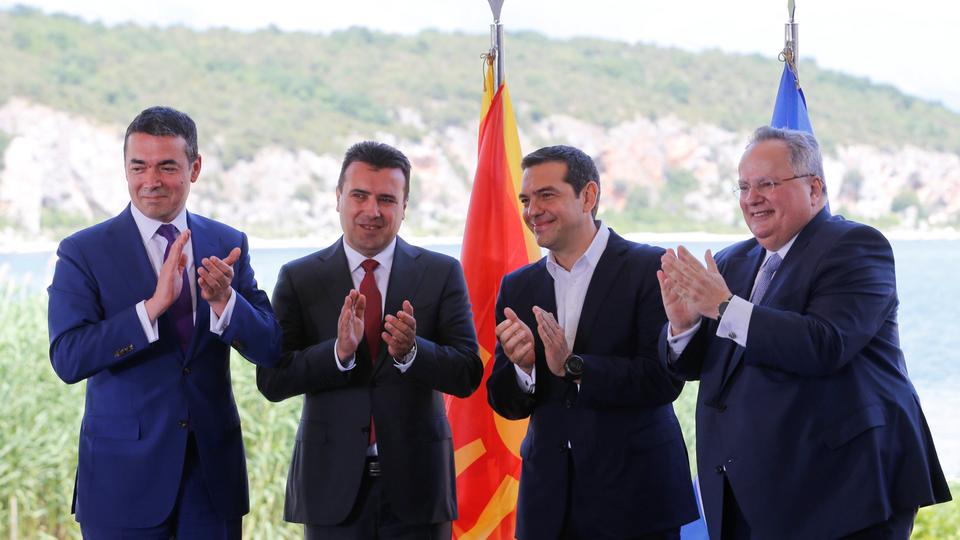 Greek Foreign Minister Nikos Kotzias, his Macedonian counterpart Nikola Dimitrov, Greek Prime Minister Alexis Tsipras and Macedonian Prime Minister Zoran Zaev applaud after signing an accord to settle a long dispute over the former Yugoslav republic’s name as look on in the village of Psarades, in Prespes, Greece, June 17, 2018. (Reuters)

The foreign ministers of Greece and Macedonia signed an accord on Sunday to rename the former Yugoslav republic the “Republic of North Macedonia.”

The landmark accord follows decades of inconclusive talks which had soured relations between the two countries and held up the admission of the Balkan state into the EU and NATO, of which Greece is a member.

The agreement still requires the approval of both parliaments and a referendum in Macedonia.

“We have a historic responsibility that this deal is not held in abeyance, and I am confident that we will manage it,” Greek Prime Minister Alexis Tsipras said as he and his Macedonian counterpart Zoran Zaev received a standing ovation from guests at a lakeside ceremony.

Tsipras survived a no-confidence vote mounted by Greece’s opposition in parliament on Saturday, but the depth of public emotion against the deal is strong.

Up to 70 percent of Greeks object to the compromise, an opinion poll by the Proto Thema newspaper showed on Saturday.

Under the deal, Greece will lift its objections to the renamed nation joining the EU and NATO.

“Our two countries have to turn from the past and look to the future,” Zaev said. “We were bold enough to take a step forward.”

Greece has been in dispute with Macedonia since 1991 over the former Yugoslav republic’s name, arguing it could imply territorial claims over the Greek province of Macedonia and an appropriation of ancient Greek culture and civilisation.

Veteran UN mediator Matthew Nimetz, who has been overseeing talks for a quarter century, described the agreement as an honourable deal. It was, he said, an example of “how neighbours can solve a problem if they really work at it”.

“Today is my birthday,” said Nimetz, who turned 79 on Sunday. “I told my family this year I don’t need any gifts because two prime ministers are going to give me a big gift.”

Protests erupt after the landmark accord

Greek protesters on Sunday clashed with riot police, who beat them back with tear gas after the historic Greek-Macedonian deal to end a 27-year name row.

A woman was hit on the head by a rock, and a man was being treated for breathing trouble, health officials said.

Some 500 demonstrators, waving Greek flags, had tried to approach the signing ceremony on the banks of Lake Prespa on the other side of the mountain from where the protest took place.

But they were surrounded by police near the small village of Pisoderi, some 25 kilometres (16 miles) away from the ceremony.

One detachment of riot police blocked the rural road leading to the lake, while others on mountain slopes threw stun grenades and tear gas at the crowd.

The authorities said some 5,000 people had earlier taken part in the protest against the agreement.

“We are fighting for the land of our fathers. We are not backing down,” a protester said.

At the fishing village of Psarades, where the deal was signed, priests tolled the local church bell in a sign of mourning, an AFP reporter said.

On Saturday, police guarding parliament had also clashed with protesters as Tsipras defeated a vote of censure against his government.

The government has blamed the incidents on far-right hardliners.