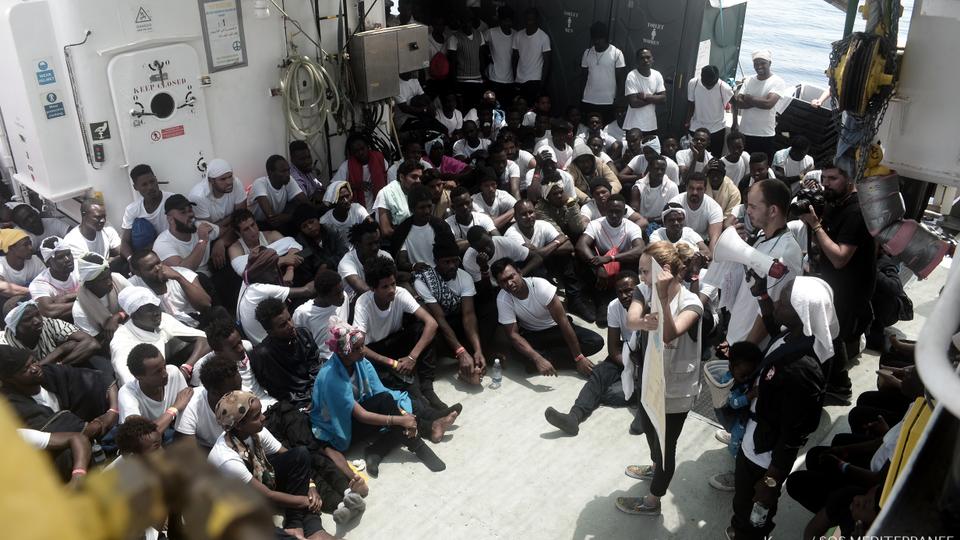 Members of SOS Mediterranee talking to rescued migrants aboard the French NGO’s ship Aquarius, in the search and rescue zone in the Mediterranean, June 11, 2018. (AFP)

Italy prepared to send hundreds of migrants to Spain in a small naval convoy on Tuesday after shutting its own ports to them, as France accused the new Italian government of cynicism and irresponsibility.

Italy’s foreign ministry on Wednesday summoned the French ambassador following sharp criticism by Paris of Rome’s refusal to take in more than 600 migrants stranded aboard the rescue ship Aquarius in the Mediterranean.

French President Emmanuel Macron denounced the decision, saying that under international law Italy should have taken the migrants in. Rome responded by calling France “hypocritical.”

The French rebuke highlights the tensions within the European Union over how to tackle a years-old migration crisis, with Italy’s new anti-establishment coalition promising to tear up the EU’s asylum rules.

Some 629 migrants, including 11 children and seven pregnant women, have been afloat in the central Mediterranean aboard the Aquarius rescue ship since Sunday, when both Italy and Malta refused to let them dock.

As Italy was brushing off the French criticism over Aquarius, an Italian coast guard ship carrying some 900 migrants it had rescued off the Libyan coast docked at a Sicilian port on Wednesday.

Spain offered on Monday to take in the group of mainly sub-Saharan Africans, who were picked up off the Libyan coast over the weekend. But the Aquarius is heavily overcrowded, making the four-day trip to Spain potentially perilous.

To overcome the problem, two Italian boats moved alongside to the Aquarius on Tuesday to share out the migrants before heading west through what are predicted to be stormy seas.

Italy has taken in more than 640,000 mainly African migrants over the past five years. Other EU states have largely ignored pleas by Rome to persuade them to take some of the newcomers and share the cost of their care, heightening anti-European and anti-migrant sentiment in Italy.

Matteo Salvini, Italy’s new interior minister and head of the far-right League, has said his move this week was aimed at forcing other European states to help pick up the strain.

“There is a degree of cynicism and irresponsibility in the Italian government’s behaviour with regards to this dramatic humanitarian situation,” French government spokesman Benjamin Griveaux quoted Macron as telling his cabinet.

Doctors Without Borders (MSF), which is operating the Aquarius alongside SOS Mediterranne, urged rethinking the lengthy trip to Spain.

“This plan would mean already exhausted rescued people would endure 4 more days travel at sea,” it said on Twitter. “MSF calls for people’s safety to come before politics.”

Rome also received backing from Hungary’s right-wing nationalist prime minister, Viktor Orban, who is a friend of Salvini and has promoted a fiercely anti-immigrant platform.

“It was so depressing to hear for years that it is impossible to protect maritime borders,” Orban told reporters in Budapest. “Willpower has returned to Italy.”

Even as Italy worked to dispatch the rescue ship, a ship from the Italian coast guard has rescued more than 900 refugees in the Mediterranean and docked at the Italian port of Catania in Sicily on Wednesday.

However, charities questioned why the coast guard boat was being allowed to dock in Italy, while migrants on the Aquarius were not.