Those killed and two more who were wounded in the operation belonged to an armed faction that is commanded by a former FARC rebel leader and had rejected the 2016 peace agreement with the government. 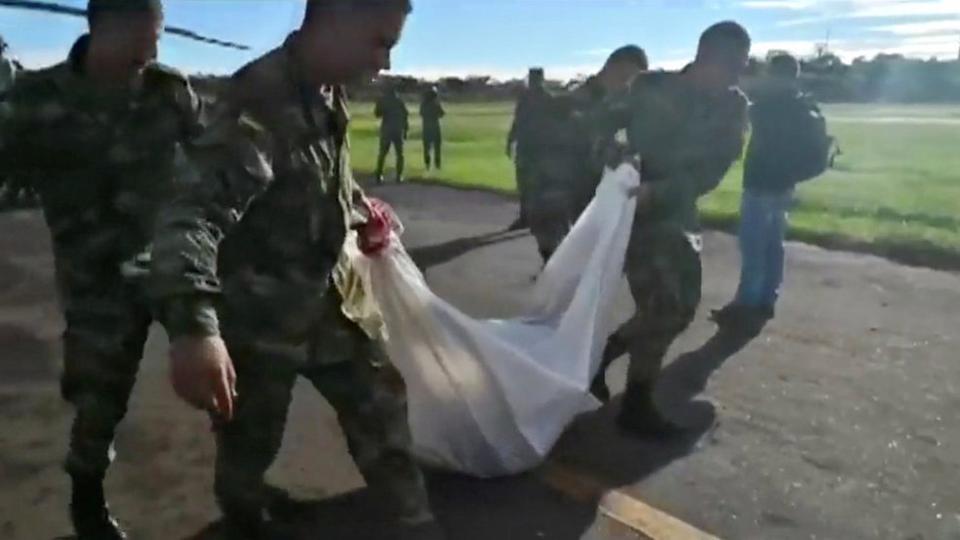 Army personnel carry a body bag after combat between the Colombian army and FARC dissidents, at a military base in Caqueta, Colombia in this still image taken from video, May 28, 2018. (Reuters)

Colombian troops killed 11 dissidents of the disbanded FARC guerrilla group, officials said on Monday, as a fight looms over the future of a 2016 peace agreement in run-off presidential elections.

The military operation took place on Sunday in the south of the country as Colombians voted in the first round of presidential elections that left a hardline conservative and a former leftist guerrilla vying for the presidency.

Defense Minister Luis Carlos Villegas said the operation in Montanita in the southern department of Caqueta left “11 dead and two wounded, including a minor who had been recruited by force.”

The 13 were part of an armed faction commanded by a former FARC rebel leader, Rodrigo Cadete, who rejected the 2016 peace agreement with the government of President Juan Manuel Santos.

The minister said the groups had been making threats against the mayor of the Caqueta capital of Florencia as well as an energy company in the region.

“The criminals had been demanding extortion payments from businesses” in Florencia and its surrounding area, the army said in a statement.

Under the peace accord, the Revolutionary Armed Forces of Colombia (FARC) disarmed its 7,000 fighters in order to join the political process. It is now a political party.

However, remnants of the rebel force – estimated by the army to number about 1,200 – are still active in the southern border areas, financing their operations through drug trafficking and extortion rackets.

“We will not drop our guard against residual groups. We will continue fighting them with the utmost forcefulness,” Santos said on Twitter.

Sunday’s military action was a jarring reminder that embers of Colombia’s 50-year-old conflict are still burning despite the peace accord with the FARC, once Latin America’s largest guerrilla group.

Besides contending with remnants of the FARC, Santos’s government has yet to conclude a peace accord with the smaller National Liberation Army, or ELN.

Negotiations with the ELN resumed in Havana earlier this month, and its rebel forces observed a five-day ceasefire during the elections.

But the future of the peace accord has emerged as a key and divisive issue in the elections, which go to a run-off on June 17.

The top vote-getter in Sunday’s round of balloting was conservative Ivan Duque, who has vowed to rewrite the accord with the FARC if elected.

Duque, who argues that FARC leaders got off too lightly, called for a “Colombia where peace coincides with justice” after the results were announced, reiterating his desire to revise – without “shredding” – the pact with FARC.

He faces off against Gustavo Petro, a former Bogota mayor who received 25 percent of the vote to Duque’s 39.7.

A past member of the now disbanded M-19 guerrilla group, Petro is the first leftist to contest a run-off in Colombia.

“It’s obviously going to be very polarised in the second round,” said analyst Andres Macais.