Paraguay becomes the second country after Guatemala to follow the United States in relocating its embassy to Jerusalem a week ago, drawing Palestinian anger. 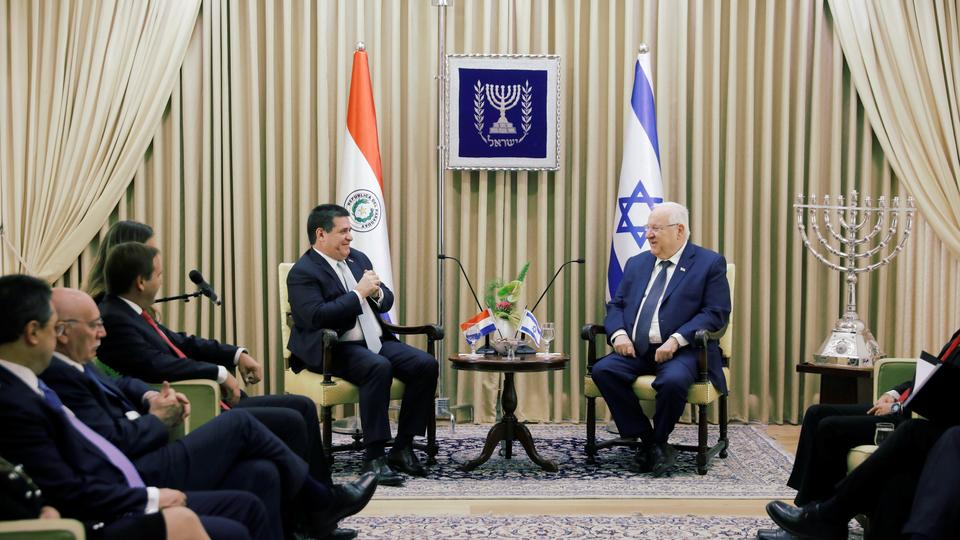 Paraguayan President Horacio Cartes sits next to Israeli President Reuven Rivlin at his residence in Jerusalem, ahead of the dedication ceremony of the embassy of Paraguay in Jerusalem, May 21, 2018. (Reuters)

Paraguay opened its Israel embassy in Jerusalem on Monday, the second country to follow the United States in making the politically sensitive move from Tel Aviv.

Paraguay becomes the second country after Guatemala to follow the United States that relocated its embassy to Jerusalem a week ago, drawing Palestinian anger.

The status of Jerusalem is one of the thorniest obstacles to forging a peace deal between Israel and the Palestinians, who with broad international backing want East Jerusalem, captured by Israel in the 1967 Middle East war, as their capital.

Israel regards all of the city, including the eastern sector it annexed after the 1967 conflict, as its capital.

“This is a historic day that strengthens ties between Paraguay and Israel,” Cartes said at the ceremony.

“By adopting such a provocative and irresponsible measure that is in direct contravention of international law and consensus, Paraguay has conspired with Israel, the United States and Guatemala to entrench the military occupation and to seal the fate of occupied Jerusalem,” Ashrawi said in a statement.

In December, US President Donald Trump recognised Jerusalem as Israel’s capital, reversing decades of US policy and upsetting the Arab world and Western allies.

Most world powers do not recognise Israeli sovereignty over the entire city and says its final status should be set in peace negotiations.