Announcement by the president expected at the White House at 2pm Eastern Time. 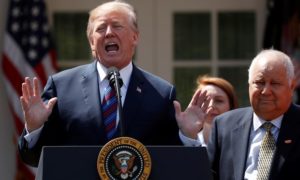 Senior UK diplomats have said they are deeply pessimistic that Donald Trump will stick with the Iran nuclear deal when he makes an announcement at the White House later on Tuesday, in what could mark the most significant foreign policy move of his presidency.

Trump tweeted that he would make his announcement on Tuesday, before the 12 May deadline by which he has to decide whether to renew the waivers on US sanctions against Iran.

The US president is expected to tear up the deal, which was negotiated under his predecessor Barack Obama in 2015, but diplomats are waiting to see how quickly and widely he plans to reimpose sanctions that would affect European firms trading with Iran. European countries are hoping to stick with the deal even if the US pulls out, but there are doubts about whether this is a viable option.

What is the Iran nuclear deal? – video

The accord, known as the Joint Comprehensive Plan of Action (JCPOA), requires Iran to give up its stock of 20% enriched uranium, halt production and limit research on new nuclear centrifuges and allow extensive international inspections of its nuclear facilities by the International Atomic Energy Authority.

There are 100 dispute mechanisms inside the deal that could be invoked to prevent its immediate collapse.

A succession of European leaders including the French president, Emmanuel Macron, the German chancellor, Angela Merkel, and the British foreign secretary, Boris Johnson, have flown to Washington in recent weeks to warn that tearing up the deal with no alternative strategy to contain Iran’s nuclear programme risks undermining diplomacy and strengthening hardliners in Tehran.

Trump, however, is now surrounded by opponents of the 2015 deal, including John Bolton, his new national security adviser, and Mike Pompeo, the new US secretary of state.

Following Johnson’s visit to Washington, a senior UK diplomat said: “We are deeply pessimistic ahead of President Trump’s announcement later today. However, we will have to wait and see what exactly President Trump says tonight.

“Our objective will remain to uphold and maintain the JCPOA. We will need to wait to understand what the US plan is to deliver on our shared goal of preventing Iran from obtaining a nuclear weapon.”

The remarks reveal the extent to which senior European diplomats are not being consulted on Trump’s final decision.

Speaking ahead of Trump’s announcement, Iran’s president, Hassan Rouhani, said: “It is possible that we will face some problems for two or three months, but we will pass through this.”

In an apparent nod to Europe, Rouhani also stressed that Iran wanted to keep “working with the world and constructive engagement with the world”.

However, a senior hardliner, Mohammad Javad Larijani, the head of the Iranian judiciary’s human rights council, said it would be a “severe mistake” for Iran to stay in if the US goes. “If the United States leaves … they should know that would be the end [for the deal],” he said.

EU and US diplomats had staged private talks over the possibility of widening the deal to cover Iran’s nuclear ballistic missile programme and wider interventions in the Middle East, but these appear to have stalled with the arrival of Bolton and Pompeo.

Robert Malley, the former lead White House negotiator on the Iran agreement under Obama, said he expected Trump to withdraw from the deal.

“It seems based on everything I am hearing from the Europeans and from people here, that President Trump wants to walk out of the deal, not because he’s not satisfied with its substance, but because it’s an Obama legacy,” he said.

Israel and Saudi Arabia have lobbied hard against the deal for different reasons, pinpointing a sunset clause that allows Iran to restart nuclear enrichment once the deal ends in 2025.

The head of Iran’s central bank said before Trump’s announcement that a US withdrawal would have no impact on the country’s economy, but the Iranian rial traded near record lows against the dollar on the free market as people tried to buy hard currency for fear of economic turmoil if Trump announces a withdrawal.

Iran also insisted that it would be able to continue as a major oil exporter, but its potential travails have helped to push oil prices higher.

Appealing to European powers on Monday, Rouhani said Iran would remain in the JCPOA. “Today we are telling the world that if you are worried about Iran’s access to nuclear bomb, we have completely allayed this concern in the JCPOA, and the deal ensures that Iran does not seek nuclear weapons,” he said.

Tehran is hoping European nations can defy US sanctions and retain trade and investment links with the country, but European banks, especially those with any links to the US, have been wary of facilitating trading even under the current sanctions regime.

Paris will continue to push for a broader deal, “whether the United States participates or not”, France’s defence minister said on Tuesday.

“This agreement is not the best one in the world,” Florence Parly told RTL radio. “But without being perfect, it still has its virtues … and they [the Iranians] are respecting it,” she said.