Yulia Skripal said in statement released on Thursday by British police that her strength is growing daily and expressed gratitude to those who came to her aid. 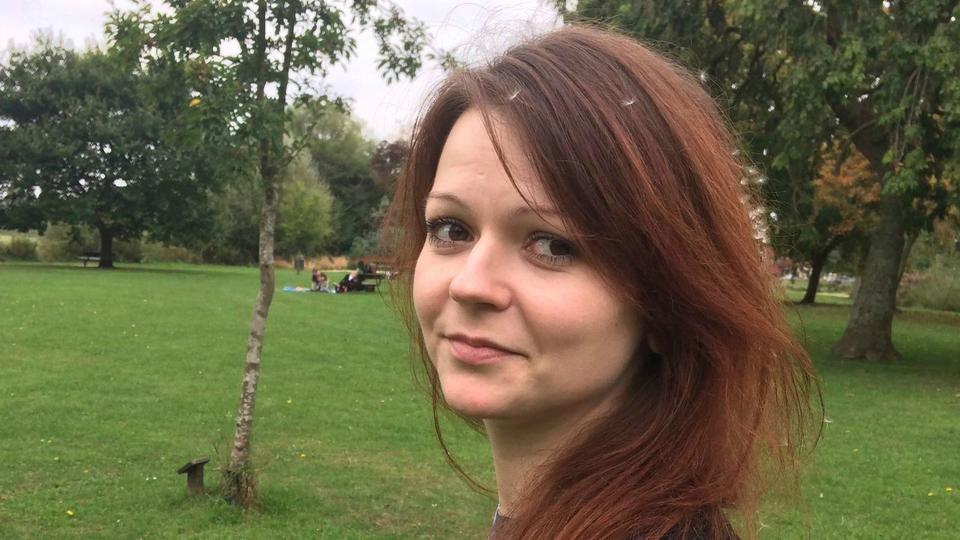 This is a file image of the daughter of former Russian Spy Sergei Skripal, Yulia Skripal taken from Yulia Skipal’s Facebook account on Tuesday March 6, 2018. British health officials say the daughter of a Russian ex-spy has responded well to treatment and is no longer in critical condition after a nerve-agent attack. (AP)

The poisoned daughter of an ex-Russian spy said on Thursday she’s recovering quickly after her ordeal, while Russia strongly protested being locked out of the probe into the nerve agent that sickened her and her father.

Britain has blamed Russia for the March 4 poisoning of Sergei Skripal and his daughter, Yulia, in the city of Salisbury. In response, more than two dozen Western allies including Britain, the US and NATO have ordered out over 150 Russian diplomats in a show of solidarity.

Moscow has fiercely denied its involvement in the nerve agent attack and expelled an equal number of envoys. The diplomatic turmoil has hit lows unseen even at the height of the Cold War.

Early Thursday, three buses believed to be carrying expelled American diplomats departed from the US Embassy in Moscow after putting their luggage on trucks. Some toted pet carriers.

Yulia Skripal said in statement released on Thursday by British police that her strength is growing daily and expressed gratitude to those who came to her aid.

“I am sure you appreciate that the entire episode is somewhat disorientating, and I hope that you’ll respect my privacy and that of my family during the period of my convalescence,” the 33-year-old said.

The British hospital treating the Skripals has confirmed that Yulia’s condition has improved, while her father, 66, has remained in critical condition.

Russian state television on Thursday released a recording of what it said was a phone call between Yulia Skripal and her cousin in Russia. In it, Yulia Skripal says she and her father are both recovering and in normal health. She says her father is sleeping and his health has not been irreparably damaged.

Rossiya TV said Skripal’s niece, Viktoria, who lives in Moscow, gave the station the recording of her conversation with Yulia. The broadcaster said it can’t verify the recording’s authenticity.

Russian Foreign Minister Sergey Lavrov, meanwhile, described the British accusations against Moscow over the nerve agent poisoning of the Skripals as a mockery of international law. Speaking at a news conference on Thursday, Lavrov insisted that the poisoning case was fabricated by Britain to “demonize” Russia.

“The so-called Skripal case has been used as a fictitious, orchestrated pretext for the unfounded massive expulsions of Russian diplomats not only from the US and Britain but also from a number of other countries who simply had their arms twisted,” Lavrov said in Moscow. “We have never seen such an open mockery of the international law, diplomatic ethics and elementary decorum.”

Russia last week ordered 60 American diplomats to leave the country by Thursday in retaliation for the United States expelling the same number of Russians.

Lavrov noted that Russia will respond in kind to any further hostile moves, but added “we also want to establish the truth.”

He sarcastically likened the British accusations to the queen from Alice in Wonderland urging “sentence first — verdict afterward.”

On Wednesday, Russia called a meeting of the international chemical weapons watchdog to demand a joint investigation with Britain into the poisoning — the demand that London has rejected.

The Hague-based Organization for the Prohibition of Chemical Weapons (OPCW) voted against the Russian proposal, but Moscow said the number of countries that abstained from the vote suggested many have doubts about Britain’s accusations.

Asked on Thursday if Russia would accept the OPCW’s conclusions, Lavrov said Moscow must be part of the probe and see the evidence.

“We can’t give an advance approval to results of the investigation, in which we aren’t taking part and which is kept secret,” he said.

British Foreign Secretary Boris Johnson said on Wednesday that “the purpose of Russia’s ludicrous proposal at The Hague was clear — to undermine the independent, impartial work of the international chemical weapons watchdog.”

The chief of Britain’s defense research lab, the Porton Down laboratory, acknowledged on Tuesday it has not been able to pinpoint the precise source of the nerve agent.

Gary Aitkenhead said scientists there identified the substance used on the Skripals as a Soviet-developed nerve agent known as Novichok. But he added “it’s not our job to say where that was actually manufactured.”

Lavrov said Aitkenhead’s statement indicated that Porton Down had samples of Novichok to use it as a marker to determine the type of the nerve agent used in the attack. He noted that Britain has failed to acknowledge yet that it possesses Novichok.

The British government says it relied on a combination of scientific analysis and other intelligence to conclude that the nerve agent came from Russia, but the Foreign Office on Wednesday deleted a tweet from last month that said Porton Down scientists had identified the substance as “made in Russia.”

Russian President Vladimir Putin’s envoy for cybersecurity, Alexander Krutskikh, mocked the contradictory statements, saying on Thursday that “the latest developments around the Skripal case indicate the days of this British Cabinet are numbered.”

Moscow has called a meeting of the UN Security Council to press its case.