Nigeria’s government says Boko Haram militants have returned 101 of the 110 girls who were abducted from their school in Dapchi a month ago. 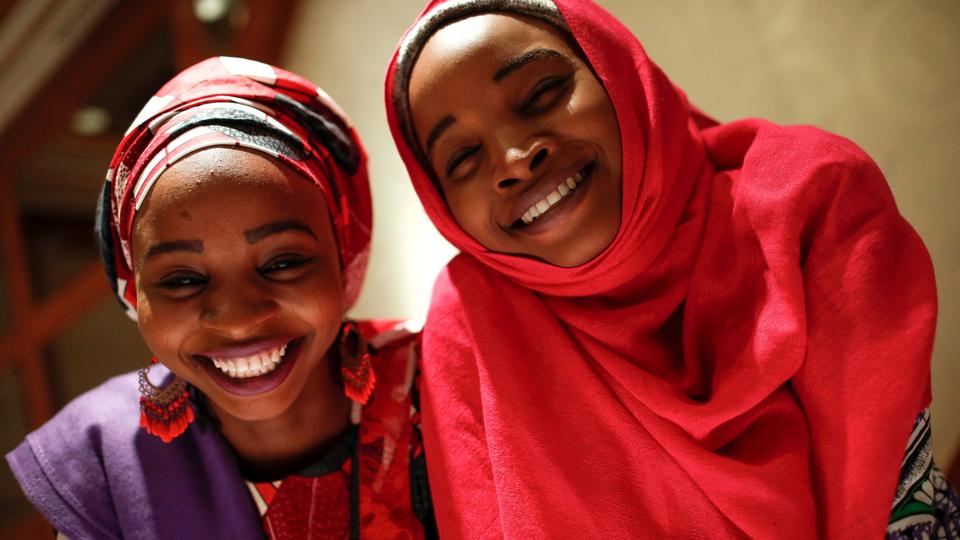 Hauwa (L) and Ya kaka, identified only by their first names, former captives of Boko Haram militants in Nigeria and now acting as advocates speaking out on behalf of other captives and survivors, pose for a portrait after they appeared on a panel dealing with issues of violence against women in New York City, US, March 13, 2018. (Reuters)

Boko Haram militants have released 101 of the 110 schoolgirls abducted from the northeast Nigerian town of Dapchi last month, the government announced on Wednesday, indicating that the release is not over.

The number “would be updated after the remaining ones have been documented,” said an aide to President Muhammadu Buhari on Twitter.

“No ransom was paid to them to effect this release. The only condition they gave us is not to release [the girls] to the military but release them in the town of Dapchi without the military presence,” Information Minister Lai Mohammed told Reuters in Abuja.

Boko Haram insurgents freed the students in the northeastern town of Dapchi, from where 110 girls were taken on February 19 in the biggest mass abduction since Chibok in 2014, witnesses told Reuters.

Some of the released students said five of their friends had died in captivity and another was still being held.

A military officer at a checkpoint near Dapchi said, “Boko Haram have brought the girls.”

The kidnapping on February 19 of the girls aged 11-19, was the biggest mass abduction since Boko Haram took more than 270 schoolgirls from the town of Chibok in 2014 – a case that triggered international outrage.

Witnesses in Dapchi town say Boko Haram militants released the girls in the middle of town before dawn on Wednesday with a warning, “Don’t ever put your daughters in school again.”

People from the town said the girls were returned by men they thought were militants from the Boko Haram group. They did not say how many girls had come back.

Their release comes a day after an Amnesty International report accused the Nigerian military of failing to heed warnings of the attack. The military has called the report an “outright falsehood.”

The Nigerian authorities have failed in their duty to protect civilians, just as they did in #Chibok four years ago. Despite being repeatedly told that Boko Haram fighters were heading to #Dapchi, it appears that the police and military did nothing to avert the abduction. pic.twitter.com/7uqu7FwgZ7

Umar Hassan, a resident in Dapchi town, said many fled upon hearing that Boko Haram insurgents were headed into the town again.

He says that while in hiding, residents saw the missing girls getting out of the Boko Haram vehicles.

A second resident, Kachallah Musa, says the militants later left without any confrontation.

The Dapchi abduction has piled pressure on President Muhammadu Buhari, who came to power in 2015 promising to crack down on Boko Haram’s nine-year-old insurgency and could face the voters again next year.