Across the US, students were urged to leave class at 1400 GMT for 17 minutes – one minute for each of the dead in Florida. 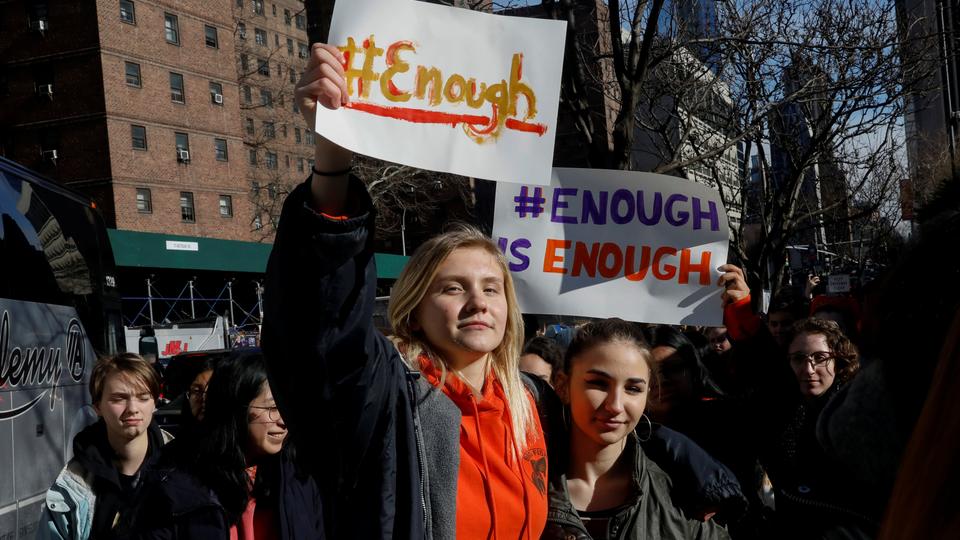 Students from Fiorello H Laguardia High School march away from their school in support of the National School Walkout in the Manhattan borough of New York City, New York, US, March 14, 2018. (Reuters)

Tens of thousands of young people in US communities big and small walked out of school to demand action on gun violence on Wednesday in the biggest demonstration yet of the student activism that has emerged since the massacre in Florida.

Braving snow in New England and threats of school discipline in places like Georgia, they carried signs, chanted slogans against the National Rifle Association and bowed their heads in silent tribute to the 17 dead in the February 14 shooting at Marjory Stoneman Douglas High School.

“I don’t want my mother or my father having to worry about me going to school getting an education and then my life is gone,” said Leticia Carroll, a 15-year-old freshman who helped organise a walkout of more than 100 students at Groves High School in Beverly Hills, Michigan, outside of Detroit.

She added, “We need answers. We need something done.”

Across the country and beyond, students were urged to leave class at 14.00 GMT (10am local time) for 17 minutes – one minute for each of the dead in Florida.

Max Poteat, a student who helped lead a walkout at North Carolina’s East Chapel Hill High School, said he was struck by the emotional weight of the moment.

“I think halfway through it really hit me, and I think everyone around, that these are teenagers just like us and that their lives were taken innocently – and that time is needed for change,” he said.

In Washington, more than 2,000 high-school age protesters observed the 17 minutes of silence by sitting on the ground with their backs turned to the White House as a church bell tolled. President Donald Trump was in Los Angeles at the time.

The protesters carried signs with messages such as “Our Blood/Your Hands” and “Never Again” and chanted slogans against the NRA.

Stoneman Douglas High senior David Hogg live streamed the walkout at the tragedy-stricken school in Parkland, Florida, on his YouTube channel. Walking amid a mass of people making their way onto the football field, he criticised politicians for not taking more action to protect students.

He said the students could not be expected to remain in class when there was work to do to prevent gun violence.

At other schools, students created symbols to try to represent the tragedy.

At Cooper City High, near Parkland, students gathered around 14 empty desks and three podiums arranged in a circle outside the school, representing the 14 students and three faculty members killed in the shooting.

The students then released 17 doves from a box. 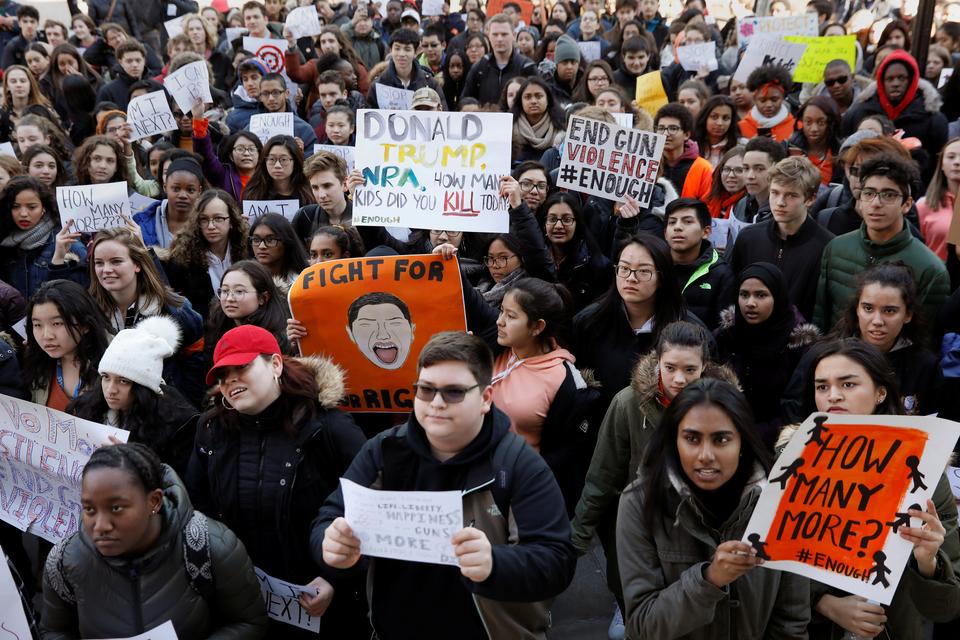 Students participate in a march in support of the National School Walkout in the Queens borough of New York City, New York, US, March 14, 2018. (Reuters)

Some schools applauded students for taking a stand or at least tolerated the walkouts, while others threatened discipline.

About 10 students left Ohio’s West Liberty-Salem High School – which witnessed a shooting last year – despite a warning they could face detention or more serious discipline.

Police in the Atlanta suburb of Marietta patrolled Kell High, where students were threatened with unspecified consequences if they participated in the walkout. Three students walked out anyway for the 17-minute protest.

A British couple walking their dogs went to the school to encourage students but were threatened with arrest if they did not leave.

The co-ordinated walkouts were organised by Empower, the youth wing of the Women’s March, which brought thousands to Washington last year. It offered the students a list of demands for lawmakers, including a ban on assault weapons and mandatory background checks for all gun sales.

The organisers are seeking to keep up the pressure for stricter gun laws despite resistance from the White House and little action over the years on Capitol Hill.

After initially endorsing an increase in the minimum age for buying assault weapons to 21, Trump left that out of a proposal that calls for a panel study on school safety.

Historians said the demonstrations were shaping up to be one of the largest youth protests in decades.

“It seems like it’s going to be the biggest youth-oriented and youth-organised protest movements going back decades, to the early 70s at least,” said David Farber a history professor at the University of Kansas who has studied social change movements.

“Young people are that social media generation, and it’s easy to mobilise them in way that it probably hadn’t been even 10 years ago.”

The walkouts drew support from companies including media conglomerate Viacom, which paused programming on MTV, BET and all its other networks for 17 minutes during the walkouts.

Other protests planned in coming weeks include the March for Our Lives rally for school safety, which organisers say is expected to draw hundreds of thousands to the nation’s capital on March 24.

Another round of school walkouts is planned for April 20, the 19th anniversary of the Columbine High shooting in Colorado.