Conservative billionaire Pinera sworn in as president of Chile

Sebastian Pinera – whose fortune has been estimated by Forbes at $2.7 billion – has promised to transform Chile into a developed economy in eight years. 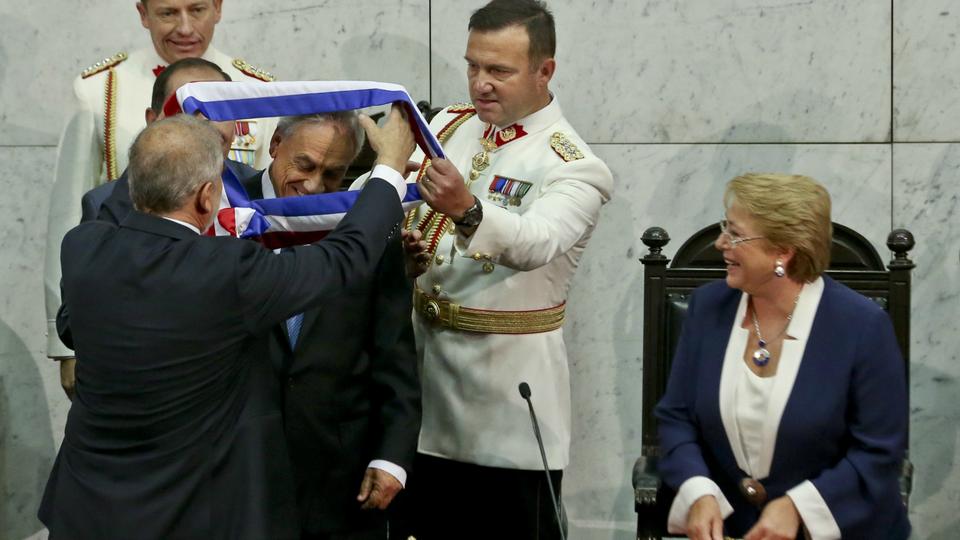 Conservative billionaire Sebastian Pinera was sworn in on Sunday to his second term as president of Chile, replacing socialist Michelle Bachelet in the office for the second time in eight years.

An emotional Bachelet helped Pinera put on the sash of office, gave him a kiss and then left the congress with members of her government.

Pinera, who was president from 2010-2014, has promised to stimulate growth and create jobs.

He is assuming the presidency just as Chile’s economy is showing signs of rebounding from a period of sluggish growth due to low prices for copper, the country’s biggest export.

“The good times are coming,” his supporters chanted after he was sworn in.

Bachelet was cheered by supporters as she capped a second term in office in which she saw through an ambitious package of reforms aimed at eliminating the institutional legacy of the 1973-1990 dictatorship of Augusto Pinochet.

Chile’s President Sebastian Pinera is showered with confetti as he rides in an open car to La Moneda presidential palace on the day of his inauguration in Santiago, Chile. (AP)

Leaders from neighboring Latin American countries, including Argentina, Bolivia, Mexico and Peru – as well as the former king of Spain Juan Carlos – attended the inauguration ceremony at the congress in the coastal city of Valparaiso.

Later, the billionaire president chose a shelter for at-risk children in a depressed district of Santiago to announce his first measures as president, the reform of state protection for vulnerable children.

The new president called for a national agreement on the care of children, and said his new cabinet would for the first time include a minister for children.

He said some 1,313 minors had died in centers run by the National Service for Minors over the last decade. More than half the young people who pass through the state centers later become delinquents, according to Pinera.

The new president pledged to increase resources and subsidies to help tackle the problem.

In a Facebook message, Bachelet said she was “profoundly proud of the transformation that we pushed these years” and said she was convinced Chile today is more “just, equitable and free.”

She was Latin America’s last sitting chief of state who is a woman.

Implementing the changes she made will now be up to the 68-year-old Pinera, who says he wants to reform the Pinochet-era pension system and supports the free education system instituted by Bachelet.

“I feel I now have more experience, more maturity, more awareness of the importance of uniting Chileans; greater humility to listen, with eyes and ears that are more attentive,” he said this week.

Pinera – whose fortune has been estimated by Forbes at $2.7 billion – has promised to transform Chile into a developed economy in eight years.

The economy has grown at an average pace of two percent over the past four years, but surged 3.9 percent in January. Analysts are predicting 3.5 percent growth this year.