Despite strong objections from his own administration, US President Donald Trump is set to approve publication of a secret memo alleging abuse of power in the FBI’s probe of his election campaign. 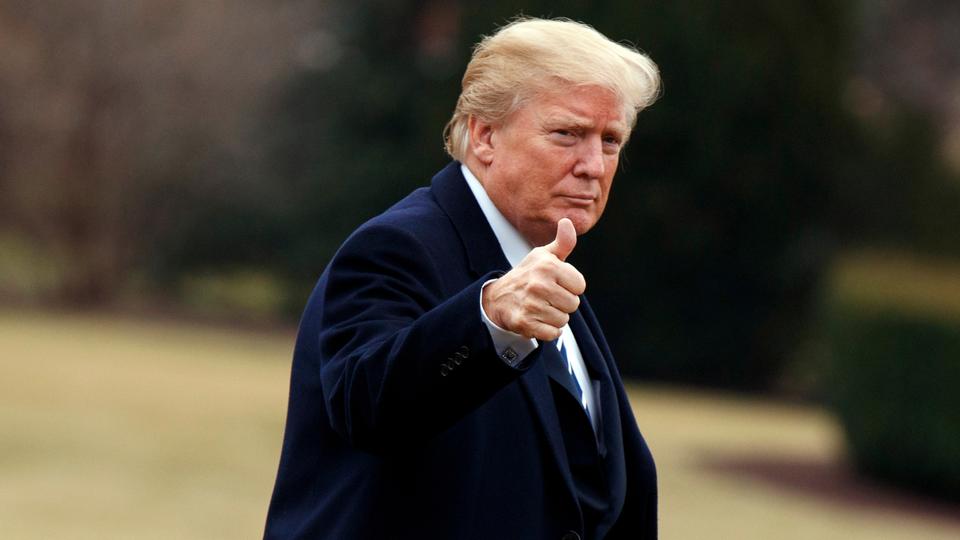 US President Donald Trump gives a thumbs up as he walks on the South Lawn of the White House after arriving aboard Marine One, on February 1, 2018, in Washington. (AP)

The White House will likely give Congress approval on Friday to make public a secret Republican memo alleging FBI bias against President Donald Trump in its Russia probe, a White House official said on Thursday, as tensions over the disputed document gripped Washington.

Trump, who had the authority to prevent its release, instead is likely to allow the four-page document to be made public with no redactions, the official said, in a move that could further inflame tensions between the Republican president and the top domestic law enforcement agency.

The document has become a flashpoint in a wider battle between Republicans and Democrats over Special Counsel Robert Mueller’s criminal probe into potential collusion between Trump’s 2016 presidential campaign and Russia.

Mueller’s probe grew out of the FBI’s Russia investigation after Trump fired the agency’s previous director.

Mueller’s investigation and the FBI probe that preceded it have hung over Trump’s year-old presidency.

Russia and Trump have both denied any collusion. The president has called Mueller’s investigation a “witch hunt” and “hoax.”

Democrats have painted the memo crafted by Republican members of the House Intelligence Committee as misleading, based on a selective use of highly classified data and intended to discredit Mueller’s work.

The FBI on Wednesday expressed “grave concerns about material omissions of fact” in the memo, whose release has the potential to prompt high-level resignations in US law enforcement agencies.

One top Republican lawmaker, Senator John Thune, voiced concern on Thursday that release of the document without redactions could expose US intelligence agencies’ sources and methods.

Thune, the Senate’s No 3 Republican, urged his House colleagues to allow the Senate Intelligence Committee to review the memo and heed the FBI’s concerns before they made it public.

“We have had the last couple of days to look at it to make sure it doesn’t give away too much in terms of classification. And right now I think, we’ll tell the Congress, probably tomorrow (Friday), that the president is OK with it,” the White House official told reporters on Air Force One as Trump returned to Washington from a Republican retreat in West Virginia.

In addition to the concern expressed by the FBI, whose director, Christopher Wray, was appointed by Trump after the president fired predecessor James Comey, the Justice Department has registered concerns about making the memo public.

Democrats have said Trump’s allies hope to use the memo to potentially give Trump an excuse to fire Deputy Attorney General Rod Rosenstein, who hired Mueller after Comey’s firing, or even Mueller himself.

But Republican House of Representatives Speaker Paul Ryan defended the document’s release, saying it was part of congressional oversight of electronic surveillance such as that used in the Russia probe and important to protect American civil liberties.

“This memo is not an indictment of the FBI, of the Department of Justice. It does not impugn the Mueller investigation or the deputy attorney general,” Ryan said.

The memo was commissioned by Republican Devin Nunes, chairman of the House Intelligence Committee, and purports to show that the FBI and Justice Department misled a US court in seeking to extend electronic surveillance of Trump campaign adviser Carter Page, four sources familiar with it have said.

Intelligence committee Democrats wrote their own memo that panel Republicans prevented from being released at the same time. Thune said if the Republican memo is released, the Democratic one should be too.

They made the demand after the committee’s senior Democrat, Adam Schiff, said late on Wednesday he discovered that Nunes had sent the White House a version of the memo that was “materially altered” and not what the panel voted on Monday to release.

“This action is not only dangerous, it is illegitimate, and violates House rules,” Pelosi said.

Jack Langer, a spokesman for Nunes, called it an “increasingly strange attempt to thwart publication,” and described the changes as minor, including two edits requested by the FBI and committee Democrats.

There has been speculation that Wray might resign if Trump allows release of the memo.

But one law enforcement official said that a number of Wray’s current and former FBI colleagues had urged him privately not to resign, arguing that doing so would remove another check on Trump’s power.

Wray also won backing for his stance from an association representing FBI agents.

“What this memo does is it seeks to torch every floor of the FBI building to protect the president,” Representative Eric Swalwell, a Democratic member of the intelligence committee, told CNN.

The four sources familiar with the memo said it contended that the FBI and Justice Department failed to tell a judge on a US court that some of the information used to justify a surveillance warrant included portions of a dossier of Trump-Russia contacts that was opposition research paid for by Democrats.

The sources said the memo does not mention, however, that the request to extend surveillance on Page, which began before Trump took office, also relied on other highly classified information and that US agencies had confirmed excerpts from the dossier included in the request.

US intelligence agencies have concluded that Russia interfered in the 2016 campaign using hacking and propaganda, an effort that eventually included attempting to tilt the race in favor of Trump.