A senior Saudi prince and seven other officials have been killed in a helicopter crash near the country’s border with Yemen, state media report.

Prince Mansour bin Muqrin, the deputy governor of Asir province, was returning from an inspection tour when his aircraft came down near Abha late on Sunday, the interior ministry said.

It did not give a cause for the crash.

But it came hours after a major purge of the kingdom’s political and business leadership.

An anti-corruption body led by Crown Prince Mohammed bin Salman, 32, ordered the detentions of dozens of people, including 11 princes, four ministers and dozens of ex-ministers.

Analysts see the unprecedented move as an attempt to cement the power of the heir to the throne.

Prince Mansour was the son of Prince Muqrin bin Abdulaziz, a former intelligence chief who was crown prince between January and April 2015, when he was pushed aside by Prince Mohammed’s father, King Salman, now 81.

Mansour served as a consultant to his father’s royal court and in April 2017 was among eight young royals appointed deputy governors. 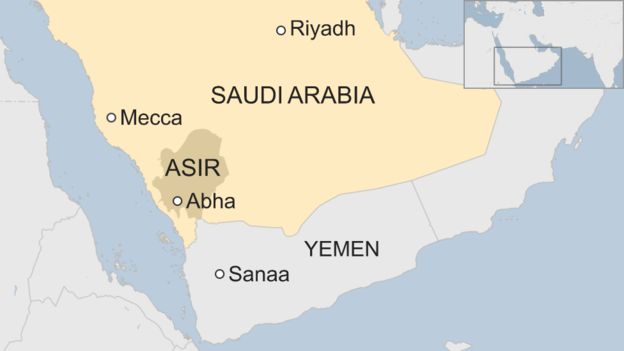 An interior ministry statement carried by the official Saudi Press Agency said the prince and seven provincial officials had boarded a helicopter on Sunday morning to tour a number of coastal projects west of the city of Abha.

“While returning in the evening of the same day, contact with the plane was lost in the vicinity of the Reda reserve,” it added. “The authorities are currently searching for survivors as the wreckage has been found.”

It also posted on Twitter photographs of the wreckage and a video showing the prince and his companions using the helicopter hours before their deaths.

The Reda reserve is located in the Sarawat Mountains, the largest range in the Arabian Peninsula, and is about 10km (6 miles) west of Abha and 120km from the border with Yemen

For the past two-and-a-half years, Saudi Arabia has been leading a coalition that is supporting Yemen’s internationally-recognised government in its war with the rebel Houthi movement.

The interior ministry statement did not draw any link between the crash and the conflict, but on Saturday the Saudi military intercepted and destroyed a ballistic missile near the capital, Riyadh, that was fired by Houthi fighters.

On Sunday, the Saudi-led coalition said it was closing all of Yemen’s air, land and sea borders in response to the missile attack. It accused Iran of supplying the missile, and said that it might amount to an act of war on Tehran’s part.