All for Joomla All for Webmasters

On July 11, the celebrated local comic strip Pepito made light of Charbonier’s political career by comparing her to a trashcan: 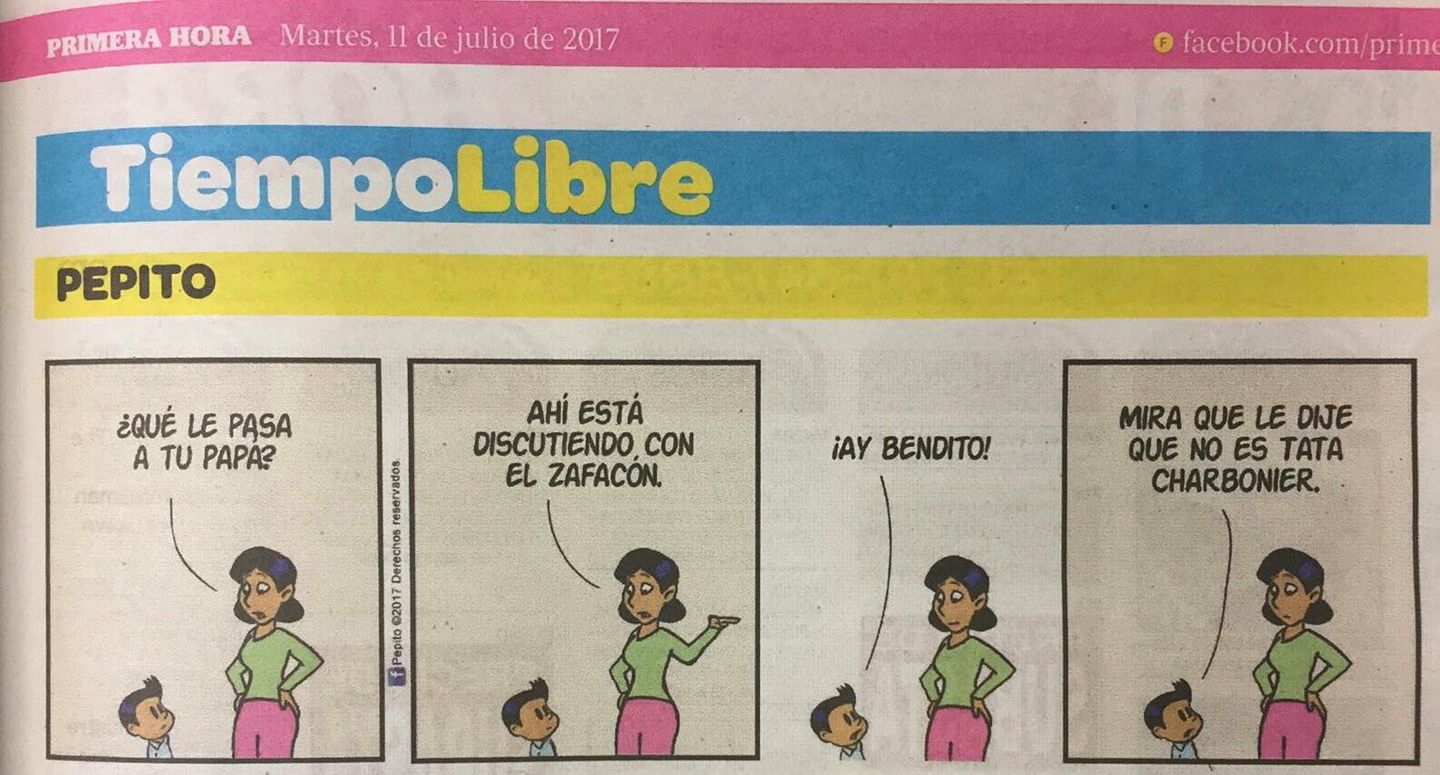 Image taken from the Twitter account @UPRestudiantes, one of the many social media accounts to have taken pictures of the canceled strip and shared them widely.

Mother: What’s wrong with your father? He’s arguing with the trash can.

The comic was published as usual in Primera Hora, a leading daily newspaper in Puerto Rico.

The next day, Speaker of House of Representatives Carlos “Johnny” Méndez wrote a letter to María Luisa Ferré Rangel, president of Primera Hora’s parent company, GFR Media. He complained that the strip referred to Representative María Milagros “Tata” Charbonier in a “derogatory, insulting and discriminatory manner.”

Primera Hora suddenly found itself in the awkward position of having to fire the cartoonists whose work it had approved of just hours earlier.

Pepito is known for its sharp critique of the government and of elected officials in both the governments of Puerto Rico and of the United States. During the 10 years it was published in Primera Hora, it earned accolades from UNESCO, the Institute of Puerto Rican Culture, the Latino Book Review and the Photojournalists’ Association of Puerto Rico, among other distinctions.

This wasn’t the first time Rep. Charbonier, from New Progressive Party (NPP), was the brunt of a joke. She is known for her extremely conservative views on marriage, sexuality and religion. A lawyer by profession, she presides over three committees which include the Judiciary Committee and the committees that oversee revisions to the civil and penal codes. She has opposed legislation that decriminalized the use of cannabis for medicinal purposes and that granted protections and rights to people in same-sex relationships. Among the many outlandish statements she has made, she has gone on record saying that pedophilia and bestiality are sexual orientations.

Pepito’s creators, Harold Jessurun and Aníbal Quiñones, expressed their dissatisfaction with Primera Hora’s decision in an article published in 80 grados, a collective news and commentary site:

«We aren’t satisfied with the decision. Especially because we were not given the space to discuss what had happened. Groups affiliated with the state have campaigned to put an end to this project, accusing it of encouraging violence against women. Their accusations are a far cry from our history of calling attention to the importance of improving the living conditions of Puerto Rican women and safeguarding their rights.»

Indeed, the New Progressive Party (NPP) isn’t known for supporting feminism. In past and current NPP administrations, women’s issues have consistently ranked low on the list of priorities—if not ignored completely—and women’s rights have not been safeguarded. If it wasn’t for the hard-won victories of the feminist movement, Charbonier would not even be occupying a seat in the House of Representatives.

It should be noted that the accusation of misogyny by Speaker Méndez also comes across as disingenuous. The week before, Senate President Thomas Rivera Schatz referred to Ana Matosantos, a member of the Fiscal Control Board imposed by the US Congress last summer on Puerto Rico, as “sir” on more than one occasion while being interviewed on radio. Ana Matosantos has been open about her sexual identity as a lesbian since her name was mentioned for the first time as a possible member of the Fiscal Control Board. Thomas Rivera Schatz has been publicly criticized for his unabashedly homophobic comments, but no other politicians have spoken out about his unkind treatment of Matosantos due to her sexual orientation.

The Journalists’ Association of Puerto Rico (Asociación de Periodistas de Puerto Rico, or ASPPRO) lamented the decision of Primera Hora’s editors to fire Pepito’s creators and reminded readers that Rep. Charbonier is a public figure and thus, a natural subject of satire.

They went on to explain why, in their view, the strip shows no hint of misogyny:

«With his comment Pepito qualifies Charbonier’s expressions and postures as lacking in value, insubstantial, useless and thus, disposable. This is why the character warns his father that the trash can “isn’t Tata Charbonier,” in metaphorical allusion to the fact that, though the trash can contains things that are discarded, it isn’t where the representative’s expressions and postures can be found, nor she herself.»

Because Primera Hora’s decision to fire Pepito’s creators was widely seen as an act of censorship, social media users photographed the strip as it appeared in print and shared it extensively on social media.

«The cancellation of the Pepito comic strip by Primera Hora is an act of censorship and coercion towards freedom of speech. The right to receive and share information and ideas without fear of reprisals is essential for our education, to have access to justice and to be able to enjoy all of our human rights.»

Other cartoonists expressed their solidarity with Pepito through their art: 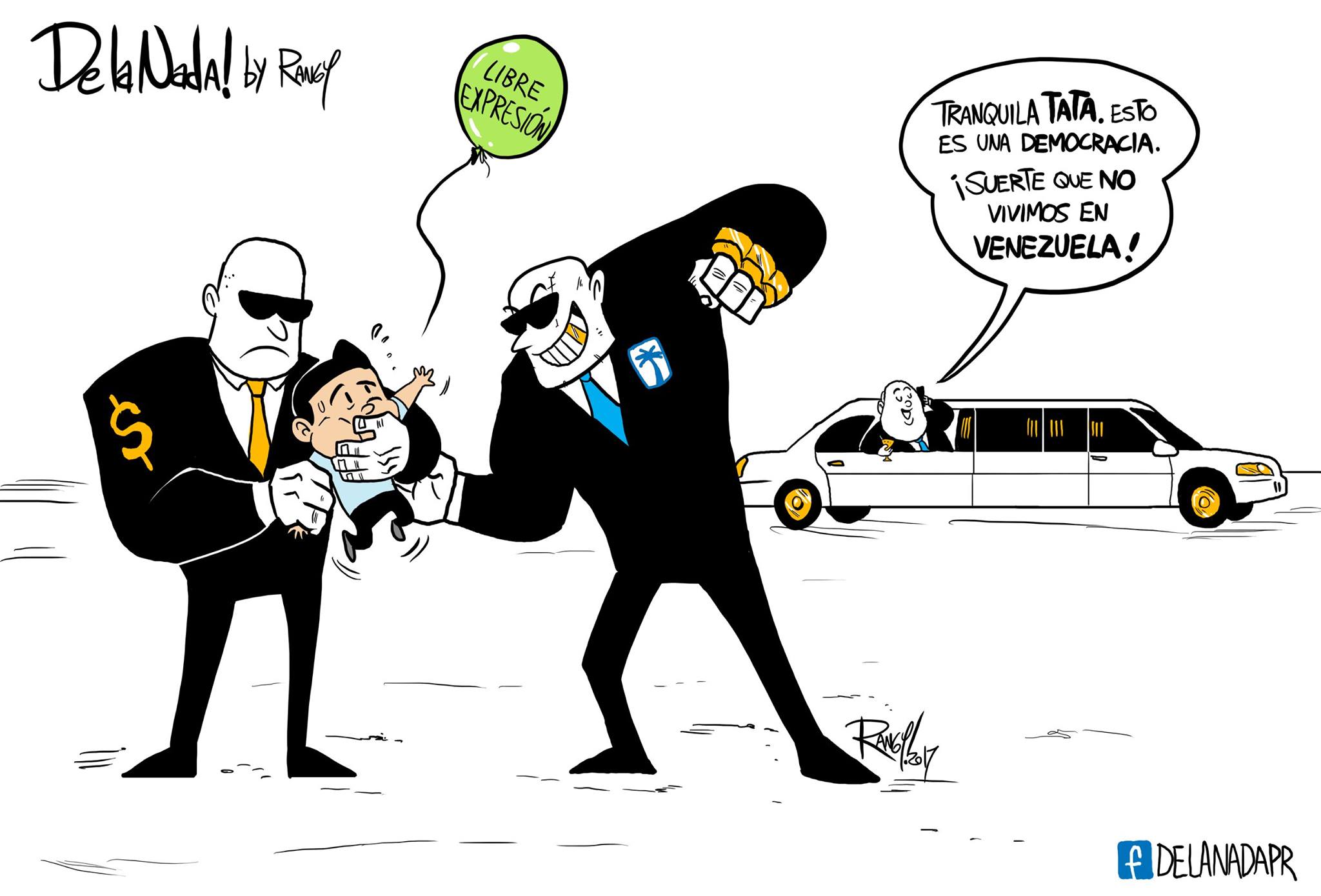 Pepito is shown here being sequestered by two men, presumably government agents, one with a dollar sign and the other with a blue palm tree, the emblem of the New Progressive Party (NPP), to which Rep. Charbonier and Speaker Méndez are both affiliated. In the background is a limousine with Speaker Méndez’s head calling out: “Relax, Tata. This is a democracy. Good thing we don’t live in Venezuela!” (N.B. Some people in Puerto Rico use Venezuela in a pejorative way as an example of what independence would mean.) Image taken from the Facebook page De la Nada. 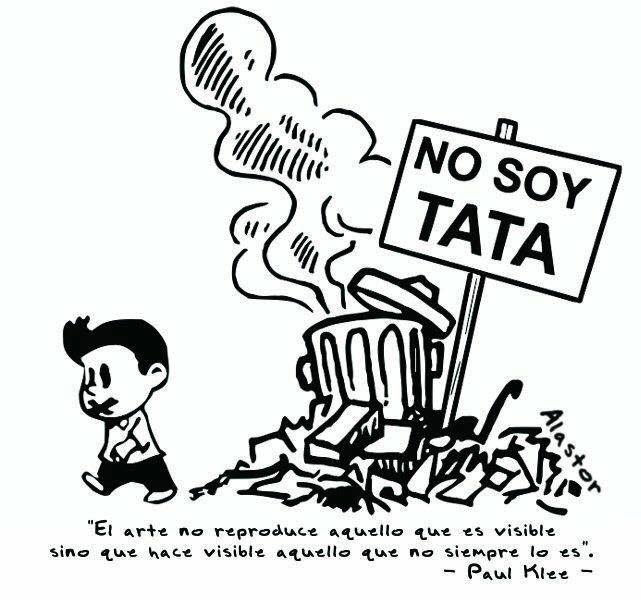 The garbage heap holds up a sign that says “I’m not Tata.” The quote by Paul Klee at the bottom reads: “Art does not reproduce that which is visible, but rather sheds light on that which is not always visible.” Image created by El Alastor and taken from the Facebook page of Pepito.

George Rivera (@ElGeorgeRiveraR), in an opinion piece for the online magazine Qiibo, questioned whether the press in Puerto Rico is really free to do its job:

«If a newspaper cancels a simple comic strip because “Tata” felt offended, what’s left? From now on, how can a news outlet that is scared of pressures from the state be trusted? What will happen to that outlet when it wants to publish a serious story that involves a statesperson?»

«From the Left or the Right, extreme or moderate, no state or individual should have power over what the press wants to say. Even more so with humor, which is already in danger in this age of absolute surveillance.»