At least 13 killed in California bar shooting including gunman

Authorities say at least 12 people were killed by a gunman, identified as 28-year-old veteran Ian David Long, at a bar in Southern California. Officials say they believe the attacker killed himself after the mass shooting. 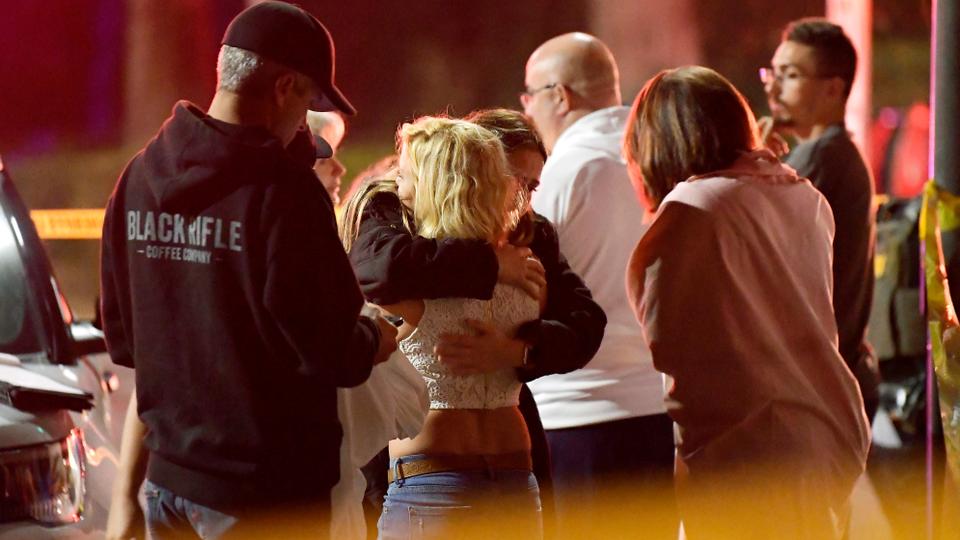 People comfort each other as they stand near the shooting scene in Thousand Oaks, California. (AP)

A gunman opened fire on a crowd of mostly college students and young adults dancing at a crowded country and western bar in a suburb of Los Angeles on Thursday, killing 12 people including a sheriff’s deputy, police said.

Police said the gunman – identified as 28-year-old Ian David Long – was found dead inside the bar and that around a dozen other people had been injured.

“We have had several contacts with Mr Long over the years, minor events, a traffic collision,” Ventura County Sheriff Geoff Dean said, adding that deputies were called to his house for a disturbance in April this year and “felt he might be suffering from PTSD.”

He said the gunman appeared to have shot at random inside the club, using only a Glock .45-caliber handgun. There was no known motive, Sheriff Dean said.

“We believe he shot himself,” Dean said.

Ventura County sheriff’s Captain Garo Kuredjian said hundreds of people were inside the Borderline Bar & Grill in Thousand Oaks at 11:20 pm (local time), and shots were still being fired when deputies arrived.

Several people from inside the bar told local media that a tall man wearing all black with a hood and his face partly covered first shot at a person working the door, then opened fire, seemingly at random, at the people inside.

People screamed and fled to all corners of the bar, while a few people threw barstools through the windows and helped dozens escape, witnesses said.

It was college night and country two-step lessons were being offered late Wednesday at the Borderline, according to its website.

Kuredjian said it has been “quite some time” since there was a shooting of any kind in Thousand Oaks, a city of about 130,000 people about 65 kilometres west of Los Angeles, just across the county line.

Nick Steinwender, student body president at nearby California Lutheran University, rushed to the scene when he heard about a shooting at the bar where he knew friends and fellow students were inside.

“It was chaos, people jumping out of windows, people hopping over gates to get out” Steinwender told local media.

He said he heard from people inside that they were hiding in bathrooms and the attic of the bar.

US President Donald Trump said on Twitter that he had “been fully briefed on the terrible shooting”.

“Law Enforcement and First Responders, together with the FBI, are on scene. 13 people, at this time, have been reported dead. Likewise, the shooter is dead, along with the first police officer to enter the bar”, he wrote.

It was the third mass shooting in the United States in under two weeks, six days after the death of two women at a yoga class in Tallahassee, Florida and 12 days after a gunman killed 11 worshippers at a synagogue in Pittsburgh, shouting “All Jews must die”.

Last year a country music festival called Route 91 in Las Vegas was the scene of the worst mass shooting in modern US history. A gunman shooting from the 32nd floor of a hotel and casino with high power weapons killed 58 people.